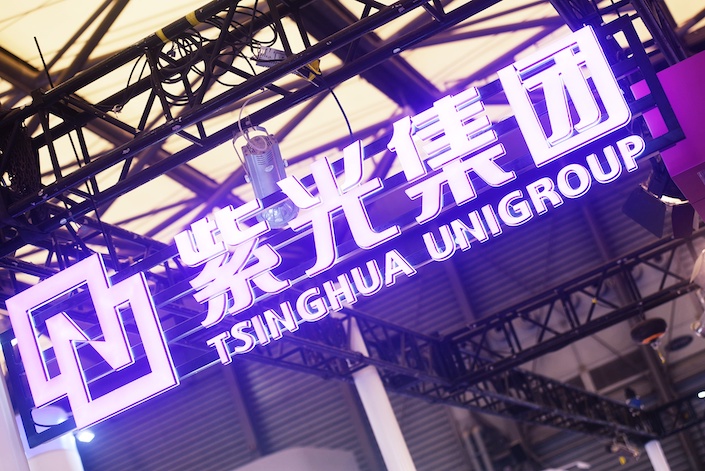 Established in 1993, Unigroup is 51% owned by Beijing’s Tsinghua University and 49% by Chairman Zhao Weiguo

As China moves to reboot Tsinghua Unigroup Co. Ltd., a handful of companies including Alibaba Group and enterprises backed by the governments of Guangdong, Beijing and Wuxi have shown interest in bidding for the assets of the former semiconductor highflyer, Caixin learned.

The bankruptcy restructuring of Unigroup is aimed at finding strategic investors to assume the company’s massive assets and debts and revive some of the conglomerate’s promising businesses. By the end of June 2020, Unigroup had 296.6 billion yuan ($46 billion) of total assets with 202.9 billion yuan of liabilities, according to a company filing.

At stake is a $46 billion business and a potentially leading player in China’s computer chipmaking ambitions. Established in 1993, Unigroup is 51% owned by Beijing’s Tsinghua University and 49% by Chairman Zhao Weiguo, who has headed the company since 2009 and was the mastermind behind an aggressive expansion of the business over the past few years.

A flurry of investments and acquisitions pushed Unigroup to the forefront of China’s drive to develop a domestic semiconductor industry. But the reckless expansion also put the company at mounting risk as its pace of generating revenue failed to catch up with the heavy spending.

Now that the reorganization is underway, interested investors were to register their plan to participate with the bankruptcy court by Sept. 5 for a preliminary review. If approved, the investors could carry out due diligence studies and submit binding restructuring plans by Sept. 25. Creditors need to file claims by Oct. 8.

The rescue of Unigroup will be a challenge because of the massive assets involved. Regulators have signaled a preference for investors that are willing to take over Unigroup’s major assets as a whole. According to company filings, as of the end of June 2020, Unigroup had 286 subsidiaries. The most valuable assets include Shenzhen-listed cloud unit Tsinghua Unisplendour, security chipmaker Unigroup Guoxin Microelectronics Co., mobile phone chipmaker Unisoc and Yangtze Memory Technologies, all leading players in segments of the semiconductor industry.

Here is what’s at stake in Unigroup’s bankruptcy restructuring and how the revamp will affect its major businesses.

What are the major assets in Unigroup’s restructuring?

Unigroup’s business profile can be roughly divided into three parts — chipmaking, cloud and noncore businesses. In a July statement, the company said strategic investors should be capable of taking over Unigroup’s core chipmaking and cloud computing businesses.

The main chipmaking units include mobile phone chipmaker Unisoc and security chipmaker Unigroup Guoxin. Unisoc, which has been preparing for a public share sale since 2020, will suffer the biggest impact from Unigroup’s bankruptcy restructuring as the process is likely to delay the long-awaited public listing, analysts said. Unigroup is the largest shareholder of Unisoc with 35.23% via indirect holdings. The unit was valued at about 60 billion yuan when it raised 5.3 billion yuan in April. In the first half of this year, Unisoc reported 240% revenue growth, mainly driven by consumer electronics as it won clients from U.S.-sanctioned Huawei Technologies.

Unigroup Guoxin is Unigroup’s only publicly traded chipmaking unit and the major financing and investment vehicle. The company has engaged in several high-profile acquisitions in the chipmaking industry to lead the company’s expansion. Unigroup Guoxin’s business focuses on security chips that are widely used for mobile SIM cards and bank cards as well as integrated circuits that can be used for 5G communication and autonomous driving. Despite the parent’s troubles, Unigroup Guoxin posted more than 100% profit growth in 2020, and its market value surged to a record 100 billion yuan in early July.

Unigroup’s cloud and IT businesses include New H3C Technologies Co. Ltd., Unicloud, Unisight and Unis Software, under the umbrella of Shenzhen-listed Unisplendour. Unisplendour owns majority stakes in H3C and UNIS WDC, a joint venture with Western Digital Corp., the American hard disk drive manufacturer. The assets attracted investors like Alibaba to propose an acquisition even before the bankruptcy restructuring started. In 2020, Unisplendour posted 59.7 billion yuan of revenue with net profit of nearly 1.9 billion yuan.

In 2019, Yangtze Memory started producing China’s first homemade 64-layer 3D NAND flash memory chips. In April 2020, it developed a 128-layer 3D NAND chip, which started production this year. The construction of the project has been delayed by the Covid-19 pandemic and is still awaiting massive follow-up investments to take off. Gu Wenjun, chief analyst at semiconductor industry analysis firm ICwise, said Yangtze Memory Technologies needs more than 500 billion yuan of investment over the next 10 years, while the company is unlikely to turn profitable for three years.

What will happen to Unigroup’s other assets?

Beyond the core chipmaking and cloud businesses, Unigroup has a long list of subsidiaries in industries ranging from energy and finance to education, a result of the company’s expansive strategy pushed by Zhao.

In June, a working team dispatched by the Beijing government to defuse Unigroup’s debt risks singled out five candidates from a longer list as potential investors to lead the revamp. All five companies agreed to take over Unigroup as a whole, Caixin learned.

Four of the five shortlisted candidates are backed by local governments. One is Guangdong Hengjian Investment Holding Co. Ltd., an investment vehicle of southern China’s manufacturing hub Guangdong. Hengjian’s interest in Unigroup reflects Guangdong’s recent foray into the chipmaking industry. The provincial government is looking to participate in the restructuring and have Unigroup move some facilities to Guangzhou, the provincial capital, one person close to Unigroup’s revamp said. But moving manufacturing capacity is a complicated task, and the Guangdong government is still weighing the costs and returns on investment, another source said.

Two other candidates — Beijing Electronic Holding Co. Ltd. and Beijing Jianguang Asset Management Co. Ltd. — are backed by the government of Beijing, where Unigroup is based. Beijing Electronic is an electrical components manufacturer that owns leading display provider BOE Technology Group Co. Ltd. Beijing Jianguang is a private equity fund company specializing in the electric sector. It holds stakes in Nexperia BV and JLQ Technology, a rival of Unisoc. But market analysts have doubts over the two Beijing companies’ capacity to acquire Unigroup due to their lack of experience in the semiconductor industry.

The other enterprise on the list is Wuxi Industry Development Group Co. Ltd., owned by the government of Wuxi, a semiconductor hub in eastern China’s Jiangsu province. The company had 89.6 billion yuan of assets as of the end of 2020 and is a partner of SK Hynix Inc.’s $1.5 billion semiconductor project in Wuxi.

E-commerce giant Alibaba Group is the only private company among the candidates. Alibaba offered the highest bid of 60 billion yuan for Unigroup’s assets, a person close to the matter said. Although Alibaba has tapped into the semiconductor industry since 2018 by setting up its own chipmaking unit T-Head, analysts said it is more likely for Alibaba to partner with other companies in the industry to bid for Unigroup.

A person close to the working team said the selection of candidates was decided not only by the price they offered but also their ability to manage Unigroup’s businesses and plan for the company’s future development.

As the court-led bankruptcy reorganization starts, more companies may have the chance to participate in bidding for Unigroup’s assets, the person said.