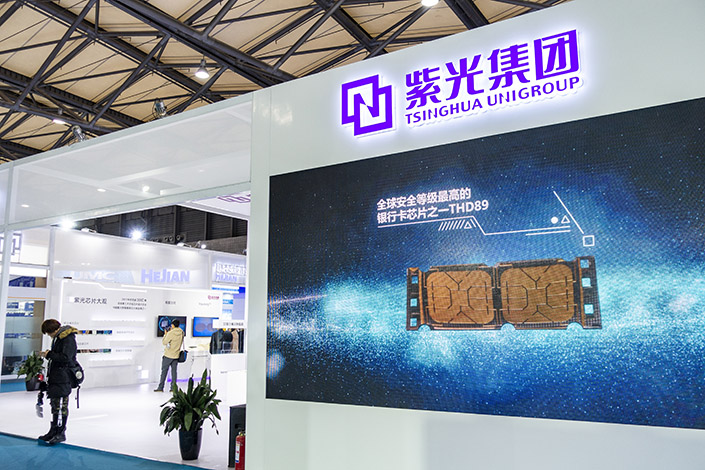 Over the past two years, Tsinghua Unigroup has defaulted on billions of U.S. dollars in both onshore and offshore bonds as its debt surged. Photo: VCG

Tsinghua Unigroup Co. Ltd., the former chip highflyer whose past and current business partners include global tech giants Intel and Hewlett Packard, has been forced into restructuring under China’s bankruptcy law, kicking off a process that could pave the way for the introduction of strategic investors like Alibaba.

A Beijing court has accepted a creditor’s application seeking a reorganization of Tsinghua Unigroup, according to filings by its listed affiliates including Unisplendour Corp. Ltd. (000938.SZ) and Unigroup Guoxin Microelectronics Co. Ltd. (002049.SZ) on Friday.

A week ago, one of the creditors, Huishang Bank Co. Ltd., filed the petition for the overhaul to Beijing No. 1 Intermediate People’s Court, citing unpaid debts and Unigroup’s lack of repayment capability.

The financial collapse of the company, which is backed by the prestigious Tsinghua University, extends a series of high-profile failures by major Chinese firms over the past two years. While many of those collapsed after taking on huge debts during massive acquisition sprees, Unigroup’s problems stemmed from its aggressive expansion into the capital-intensive chip sector.

Once at the forefront of China’s drive to develop a domestic semiconductor industry, Unigroup embarked on a stream of acquisitions and investments between 2013 and 2019, forging partnerships with Intel Corp. and HP Inc. that saw it as a major player during that time. But it failed to generate income quickly in an industry famous for huge costs of entry and long payback periods.

Over the past two years, the company has defaulted on billions of U.S. dollars in both onshore and offshore bonds as its debt surged (link in Chinese) to 172 billion yuan ($26.5 billion) at the end of 2019 from just 97.7 billion yuan two years earlier.

A team dispatched late last year by its parent Tsinghua Holdings Co. Ltd. will lead the efforts to attract strategic investors and defuse the company’s debt problems, analysts at Pacific Securities Co. Ltd. wrote in a note last week. The launch of the restructuring process is expected to help the company quickly reach an agreement with its creditors, they added.

Some investors have already shown an interest in some of Unigroup’s better performing assets. E-commerce giant Alibaba Group Holding Ltd. and state-backed funds in East China’s Zhejiang province are interested in Unigroup’s 46.45% stake in Unisplendour, which holds 51% of H3C Technologies Co. Ltd., a maker of servers and other digital products, two sources close to the restructuring process told Caixin.

H3C was formerly wholly owned by HP, which in 2015 sold 51% of the company to Unisplendor for $2.3 billion. Hewlett Packard Enterprise has since maintained its 49% stake in the company since then.

In the restructuring process, Tsinghua Unigroup is expected to try to reach an agreement with its creditors that allows some of its debt to be forgiven or repayment delayed, while strategic investors are also invited to provide new funds. If all sides fail to reach agreement, the company could have to be liquidated.

The Pacific Securities analysts estimated the restructuring process would be smooth given that Unigroup still holds valuable assets. They added the process won’t significantly impact those subsidiaries.