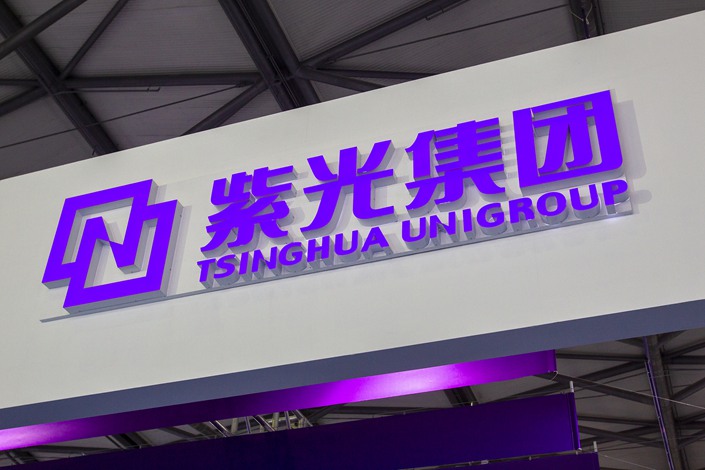 Tsinghua Unigroup, which counts the prestigious Tsinghua University as its majority stakeholder, is struggling under the weight of 157 billion yuan in debt, more than half of which is due within a year.

As China’s microchip aspirations undergo a major adjustment, the aggressive Tsinghua Unigroup Co. Ltd. is fast emerging as a poster child for how the sector could be slowly sinking under the weight of a massive mountain of debt.

The company, which counts the prestigious Tsinghua University as its majority stakeholder, was one of the earliest to embark on a major buildup of semiconductor microchip assets, spending billions of dollars on acquisitions and new projects after Beijing first decided to build up the sector around 2014. But now the company is struggling under the weight of 157 billion yuan ($24 billion) in debt, more than half of which was due within a year, according to its midyear report this year.

Concerns about its ability to pay back that debt have sent the company’s U.S. dollar bonds on a roller coaster ride this year, with one such bond due next year trading for as low as for 54.8 cents on the dollar back in March. The company has embarked on a cash raising drive by selling off stakes in some of its many holdings and trying to issue new shares, though even that effort has had limited impact due to the enormity of its debt.

Unigroup is hardly alone, though its case is one of the biggest due to its early focus on the high-cost-of-entry microchip industry. While the U.S.-China trade war has added recent urgency to China’s efforts to develop a domestic microchip sector, the campaign actually extends back to at least 2014 when the country set up a major fund to promote the industry. Many companies like Unigroup that signed on early are now coming under pressure, with more likely to follow.

“It’s quite likely that some will require rescue by the local government,” said Gartner semiconductor analysts Sheng Linghai. “There will definitely be some failures. The main issue is that these require large investments with no immediate possibility of profits. If there’s no strong support, they are quite likely to fail.”

Despite manufacturing much of the world’s electronics, from PCs to smartphones, China actually imports most of the high-tech microchips that are central components to such products. Its reliance on foreign products has come into focus over the last two years as the U.S. has used sanctions to halt the chipmaking capabilities of telecoms giant Huawei Technologies Co. Ltd., one of the nation’s leaders in the space.

Read more
In Depth: Huawei Eyes ‘Not Made in America’ Chip Supply Chain as Stockpiles Dwindle

Further compounding the matter, Beijing has stepped in recently to castigate local governments for pumping big money into chip startups without the talent or other resources to succeed. Last month, a spokesperson for China’s state planner, which must approve all such major investments, chided weaker players that have flocked to the sector, saying many have “blindly taken on projects” despite having no experience, technology or workers skilled in integrated circuit development.

In the latest twist of the Unigroup case, an executive from the Tsinghua University entity that holds 51% of the company was sent to the Unigroup board earlier last week to help it try to resolve its situation, Caixin learned from a company insider. The company’s troubles have also prompted the government to set up a working group to assist in the resolution, the source said.

Concerns began to mount this year when another similar company, Founder Group, tied to the similarly prestigious Peking University, ran into difficulties, including its default on a 2 billion yuan bond in December. As concerns mounted that Unigroup could be facing similar problems, its U.S. dollar bonds due in 2021 fell to $0.548 on the dollar in March.

Its shares gained back some ground after it announced a capital increase in June with the introduction of a new investor from Chongqing, one of a steady stream of capital-raising exercises the company has tried to ease its debt. But then another selloff occurred in September when rumors emerged that its bond underwriter was setting up a committee over concerns about the company’s ability to meet its debt obligations.

That caused the bonds to plunge 23.4% between Aug. 19 and Sept. 10, though they again gained back some ground after the company dismissed the talk as just rumors. Most recently, the company’s bonds plunged again early this month after a credit ratings agency warned about its mounting debts. Earlier this week, it suffered another setback when it failed to win creditor approval for a rollover of 1.3 billion yuan ($197 million) of bonds that came due Sunday.

Meanwhile, the company’s capital raising efforts have covered a wide range of initiatives, with varying degrees of success. In July, one of the group’s publicly listed units, Unigroup Guoxin Microelectronics Co. Ltd., announced it had been planning to raise money through the issue of new shares, but that its plan failed to win approval from the securities regulator.

In May Unigroup agreed to sell 13.4% of its Spreadtrum chip design unit to 22 investors for 7.4 billion yuan. It also plans to raise more money from Spreadtrum by conducting an IPO for the unit on China’s Nasdaq-style STAR Market next year. And in September, another one of its units announced it would sell 5.7% of its Shenzhen-listed Unisplendour Corp. Ltd. to raise another 4.7 billion yuan.

But it remains to be seen if those efforts will help it to avoid more defaults.

Another major would-be chipmaker facing even bigger pressure is Wuhan Hongxin Semiconductor Manufacturing Co. Ltd. (HSMC), an $18.5 billion company now on the brink of collapse as it faces a cash shortage before it even begins production. Earlier this week, Caixin learned that Chiang Shang-yi, a semiconductor industry veteran who became the company’s CEO and general manager in July 2019, resigned from all posts in July of this year.