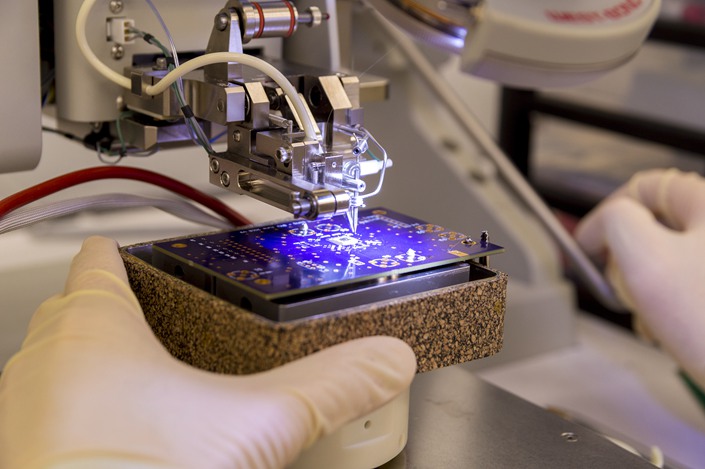 HSMC is part of a recent boom in the Chinese mainland’s semiconductor industry as Beijing prioritizes self-sufficiency in key tech areas affected by tensions with Washington.

Wuhan Hongxin Semiconductor Manufacturing Co. Ltd. (HSMC), an $18.5 billion company that aimed to become one of China’s leading high-tech chipmakers, lost its chief executive amid a cash crunch that pushed the company to the verge of collapse.

Chiang Shang-yi, a semiconductor industry veteran who became the CEO and general manager of HSMC in July 2019, resigned from all posts in the Wuhan-based company in July, a lawyer’s statement viewed by Caixin showed.

The executive proposed to resign in June for personal reasons, and the company acquiesced, the statement showed. Chiang confirmed the matter with Caixin.

Chiang called his days at HSMC an “unpleasant experience” that is “hard to describe in a few words.”

The 74-year-old Chiang is known for his deep experience and well-recognized expertise in chipmaking R&D. He studied at Princeton University and Stanford University and spent nearly 40 years in the industry.

Chiang was a veteran executive at Taiwan Semiconductor Manufacturing Co. (TSMC), the world’s largest chipmaker by market value. He retired as TSMC’s executive vice president and co-chief operating officer in 2013 and served as adviser to the company’s chairman for two more years.

In July 2019, Chiang surprised the industry by taking the helm of then little-known HSMC, an ambitious chipmaking project backed by the government of Central China’s Wuhan.

Established in late 2017 with planned investment of 128 billion yuan ($18.5 billion), HSMC was set to make logic chips using 14 nanometer and 7 nanometer technology and smaller, which would have made it one of China’s most advanced manufacturers in the field, according to the company website. HSMC is part of a recent boom in the Chinese mainland’s semiconductor industry as Beijing prioritizes self-sufficiency in key tech areas affected by tensions with Washington.

People familiar with Chiang said he was likely to have joined HSMC in hopes of pushing forward R&D on cutting-edge integrated circuit packaging technologies, which the company declared to be a business focus.

The Wuhan project previously received strong government backing. The Hubei government’s official website said it was one of the province’s biggest investment projects in 2017 and 2018 and a “provincial-level key construction project” in 2018 and 2019.

But the project never proceeded as expected and was shaken by a series of troubles since last year. In November 2019, a local court suspended HSMC’s right to use the land where it was building the plant amid a dispute with one of the engineering firms involved.

In July this year, a government report found that HSMC was suffering from a large funding shortfall that could bring it to halt at any time. According to the report, the venture has yet to receive the lion’s share of its planned funding, or 112.3 billion yuan of the originally planned 128 billion yuan.

According to the report, the project essentially ground to a halt amid the unlikely prospect of getting any of its remaining funding this year.

A Caixin investigation also found that the plant’s technology capacity was largely exaggerated. The local government said HSMC owns an advanced lithography machine produced by the Dutch company ASML Holding NV that is the most cutting-edge piece of equipment ever imported into China. But analysts said the information was misleading as HSMC’s gear is just one of several imported machines capable of producing 7 nanometer chips in China.

Meanwhile, business registration records showed that HSMC was taken over by the Wuhan government after shareholding changes published Nov. 10. The enterprise is now under the full control of the state assets supervision and administration commission for the Dongxihu district government in Wuhan.

Many companies have “blindly taken on projects” despite having no experience, technology or workers skilled in integrated circuit development, Meng Wei, a spokesperson for the commission, said in October.

As of the end of 2019, China had some 50 large-scale chip manufacturers across the country that took in 1.7 trillion yuan in funding, or an average investment of 30 billion yuan each, according to Caixin calculations.