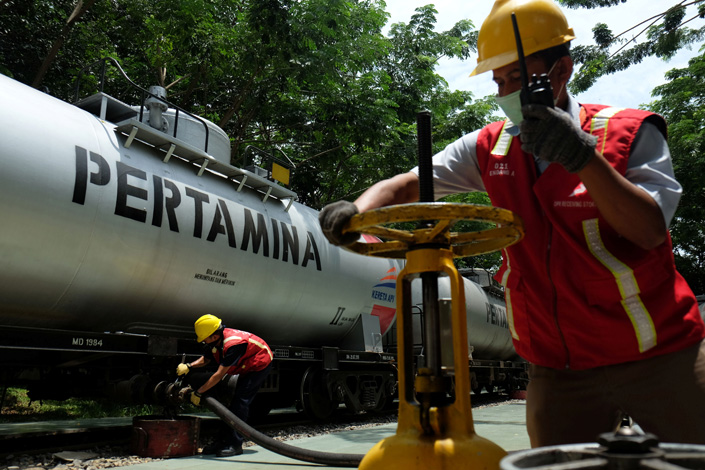 (Nikkei Asia) — A fossil fuel shipper and a geothermal energy firm are among the 14 state-owned companies that the Indonesian government plans to list in the stock market by 2023 in an effort to both improve management and replenish public coffers drained by the coronavirus response.

Indonesia is home to over 100 SOEs, according to the government. Out of that number, 34 are already being traded on the stock market — mainly those in key industries like transportation and energy. With an IPO boom going on here now, the government believes the timing is right to tap private investment money for a new round.

Despite retaining majority stakes in the companies, Jakarta hopes that management will improve by creating distance from the government and making executives aware of the views of minority shareholders.

Erick Thohir, the billionaire who became minister of state-owned enterprises, is leading the charge to list shares, saying earlier this year that IPOs were necssary to win in "open competition."

The latest round of IPOs is scheduled to begin this fall on the Indonesia Stock Exchange. Details such as how many existing and new shares will be listed will be determined later, but the first three IPOs are set to occur by next year and will all be subsidiaries of state-owned enterprises.

Another Pertamina unit, Pertamina Geothermal Energy, will also list by 2022. The company will look into expanding geothermal plants to respond to the growing demand for renewable energy.

Dayamitra Telekomunikasi, a tower-building subsidiary of telecommunications leader Telekomunikasi Indonesia, is due to list in the fourth quarter of this year. The group, also known as Telkom, plans to raise $1 billion. The funds are expected to go toward investments in 5G communications services, which launched in Indonesia this year.

The 14 companies destined for IPOs include those in designated growth industries such as electric vehicles and health care.

The government hopes to benefit from Indonesia’s current IPO boom.

Internet retailing unicorn Bukalapak made its debut on the exchange at the beginning of August. Ride-hailing giant Gojek and e-commerce provider Tokopedia plan to list as well following their merger.

The Indonesian government has exhausted the treasury combatting the COVID-19 epidemic. Policymakers look to float SEOs and bring in private-sector growth funds while interest from investors is high.

"If the IPO of startups and unicorns as well as [SOEs] are carried out successfully, of course there will be positive sentiment towards the Indonesian capital market, which can have a positive impact on capital inflows to the Indonesian stock exchange," said Toto Pranoto, senior economist at the University of Indonesia and an observer of SOEs.

The Indonesia Stock Exchange requires companies wishing to list to have strong corporate governance practices in place. This includes the appointment of independent outside parties on the boards of directors and auditing committees.

"Enhanced fundraising and corporate governance will encourage SOEs to survive within the tough competitive environment," said the ministry official who disclosed the list of planned IPOs.

Indonesia’s budget deficit topped 6% of the gross national product last year, due to stimulus spending to stem the economic fallout from the pandemic. The rule to keep deficit spending within 3% of the GDP has been suspended, but it is set to be reinstated in 2023.

A failure to meet that target would damage Indonesia’s credit rating. Social insurance spending for the country’s growing elderly population is also driving the pursuit of a balanced budget.

Dividends and taxes from SOEs accounted for roughly a fifth of Indonesia’s tax receipts in 2019. Higher profitability at SOEs could translate to extra dividends and tax revenue from those companies. Proceeds from the sale of state-held shares will contribute to the coffers as well.