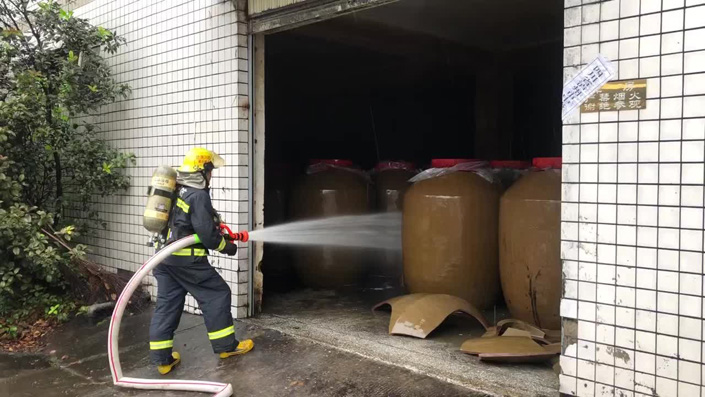 A firefighter hoses down the flammable "baijiu" liquor. Photo: The Paper

A total of 41 Chinese distillers suffered damages during a magnitude 6 earthquake that shook Luzhou, famous for its “baijiu” liquor, in Southwest China’s Sichuan province Thursday.

Sometimes dubbed “China’s baijiu city,” Luzhou saw its distillers rake in 102.8 billion yuan ($15 billion) in revenue in 2020, according to Luzhou mayor Yang Linxing at a press briefing (link in Chinese) in January this year. Sales revenue for the overall liquor industry reached 835 billion yuan for the year, data released by the China Alcoholic Drinks Association shows.

Luzhou Chennianjiao lost more than 200 tons of liquor as a result of a leak from more than 170 cracked ceramic jars in its warehouse in Lu county, the epicenter of the quake. The amount is equivalent to more than one-fifth of the distillery’s inventory of 1,105 tons, according to the Sichuan government in a Weibo post (link in Chinese) on Thursday.

A video shared by the government shows firefighters hosing down the highly flammable and combustible liquor to dilute it. Despite having 55 firefighters working nearly three hours at the site, officials said it still posed a fire hazard and asked residents to stay away from the area.

An employee at Luzhou Chennianjiao — which is not connected to its better known hometown rival Luzhou Laojiao Co. Ltd. (000568.SZ) — told Caixin that the leak had greatly affected the distillery’s operations and, depending on the progress of the cleanup, it is unclear when normal production can be resumed.

Luzhou Laojiao said in a Thursday filing to Shenzhen Stock Exchange (link in Chinese) where it is listed that it did not record any casualties or damages from the earthquake, and that operations were normal.

Three people were killed in the quake, which jolted the county at 4:33 a.m. on Thursday and also left 100 people injured, according to a statement (link in Chinese) by the Ministry of Emergency Management on Thursday night. At least 1,400 houses have collapsed and more than 120,000 people have been affected. Lu county is home to about 1 million people.

Liquor industry analyst Cai Xuefei told Caixin that natural disasters such as earthquakes are a cause of force majeure damage to the production and storage of distillery companies. A force majeure clause in a contract would typically excuse the parties from meeting their obligations following the occurrence of such unforeseeable events.

Fortunately, damages incurred by most medium and large distilleries have been quite limited and most major companies would have relevant insurance coverage, Cai said.