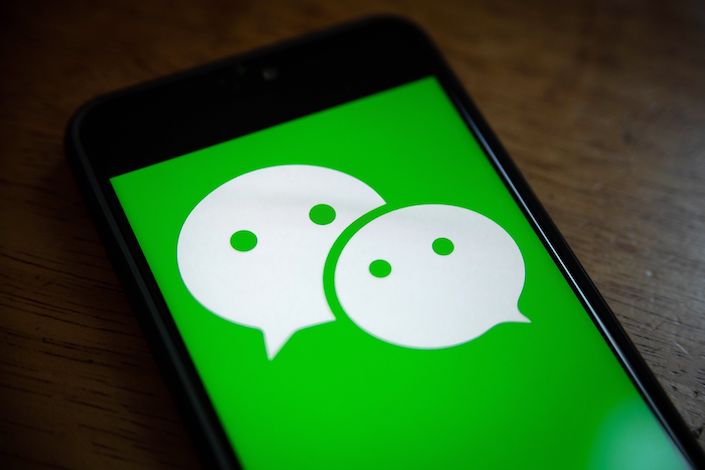 The logo for Tencent Holdings Ltd.'s WeChat app is arranged for a photograph on a smartphone in Hong Kong

(Bloomberg) — Tencent Holdings Ltd. allowed users of its main WeChat social media service to link to rivals’ content for the first time in years, taking initial steps to comply with Beijing’s call to dismantle walls around platforms run by the country’s online giants.

Starting Friday, users who upgrade to the latest version of the messaging service can access external services such as Alibaba Group Holding Ltd.’s Taobao online mall or ByteDance Ltd.’s video app Douyin, both of which were previously walled off from WeChat’s billion-plus members. However, that applies only to one-on-one messaging, not group chats or Facebook-like Moments pages.

While it’s unclear whether the social giant has opened more of its scores of online services, it’s a major step for Tencent, which controls vast swathes of China’s internet along with Alibaba and ByteDance. In a statement Friday, Tencent said it will also provide ways for users to report suspicious content and work on features for sharing links in wider group discussions.

China’s top technology regulator warned internet firms to stop blocking links to rival services, prizing open so-called walled gardens in a broader campaign to curb their growing monopoly on data and protect consumers. The government has accused a handful of companies of unfairly protecting their spheres: Tencent in social media via WeChat, Alibaba in e-commerce with Taobao and Tmall and more recently ByteDance in video via TikTok cousin Douyin.

Alibaba is regarded as benefiting more because it will be able to tap Tencent’s billion-plus users, while Tencent — which is fiercely protective of the user experience on its apps — has less incentive to allow people to post shopping links.

The Ministry of Industry and Information Technology last week summoned executives from the country’s largest online platforms to emphasize the need to end closed ecosystems that impair the flow of commerce. They’re also regarded by critics as key to helping internet companies control user data and market dominance.

China’s largest internet corporations have historically blocked links from within their services to rivals’ content. It was unclear what actions regulators want the big tech businesses to take and by when. Local media reported that the MIIT ordered internet firms to start taking action Sept. 17.

Alibaba and Tencent executives said they will comply, publicly espousing a more open Chinese internet. Earlier this year, Alibaba aimed to set up a Taobao Deals lite app on WeChat and invited merchants to participate. But Tencent executives said during the company’s most recent quarterly earnings call that it prioritizes the user experience and any opening-up should be moderated.

ByteDance in February sued Tencent, alleging its rival violated antitrust laws by blocking access to content from Douyin on WeChat and QQ, the country’s two largest social media services by users. The Shenzhen-based company called the allegations baseless and malicious.