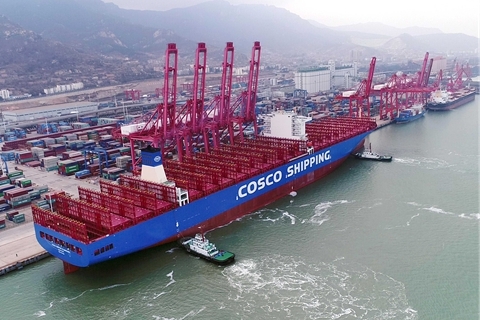 As of June 30, Cosco Shipping Ports operated 357 berths in 36 ports around the world

A unit of China Cosco Shipping Corp. struck a deal with Hamburger Hafen und Logistik (HHLA) to acquire a 35% stake in Container Terminal Tollerort (CTT) in the Port of Hamburg, expanding the Chinese shipping giant’s global terminal network in Europe.

Hong Kong-traded Cosco Shipping Ports Ltd., a terminal operator of Cosco, will pay 65 million euros ($76 million) for HHLA’s holding in CTT, the company said Wednesday. The buyer also agreed to assume CTT’s 34 million euros of debt to HHLA, putting the total value of the deal at 99 million euros ($116 million). HHLA is one of Europe’s largest port and logistics service providers.

After the deal, CTT will become a preferred transshipment hub for Cosco, and HHLA expects the transaction to deliver long-term secured capacity and employment in the Port of Hamburg, analysts said.

CTT is one of three container terminals operated by HHLA in the Port of Hamburg, the largest container port in Germany and the third-largest in Europe. In 2020, the Hamburg port handled 8.5 million twenty-foot equivalent units (TEUs) of containers, about one-third contributed by trade between China and Europe.

Since the first Chinese vessel was processed at Tollerort back in 1982, the terminal has become an important hub for Cosco’s fleets, according to Angela Titzrath, chairwoman of HHLA.

“HHLA and Cosco equally pursue the goal of successfully securing the future of CTT and an even more efficient dovetailing of Chinese logistics flows in Hamburg,” Titzrath said.

According to the filing, Cosco Shipping Ports’ interest in CTT will last 20 years. Lars Anke, HHLA’s Asia-Pacific representative, said it is possible for the parties to further extend the partnership as HHLA is seeking long-term cooperation with Cosco.

The transaction is pending approvals from German regulators.

As of June 30, Cosco Shipping Ports operated 357 berths in 36 ports around the world, including 210 container berths with total annual turnover capacity of 118 million TEUs.