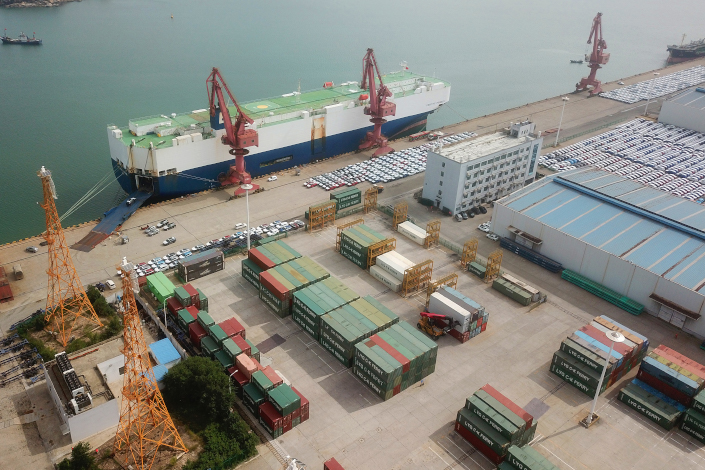 Experts estimate that accession to the CPTPP will raise China’s exports by 4.69-10.25 percentage points, depending on different scenarios.

The Chinese government recently applied for membership of the Comprehensive and Progressive Agreement for Trans-Pacific Partnership (CPTPP), which has attracted worldwide attention. The move comes after careful consideration by Chinese policymakers and reflects China’s determination to deepen reform and expand its opening-up. What China needs to do next is to step up efforts to meet CPTPP entry requirements to get its application accepted as soon as possible.

China’s formal move to join the CPTPP caught some people by surprise, but before that, there were signs indicating that it might happen. Last year, Premier Li Keqiang mentioned in his annual news conference at the end of the National People’s Congress that China “has a positive and open attitude toward joining the CPTPP.” With the signing of the “Regional Comprehensive Economic Partnership Agreement” (RCEP) in November 2020, President Xi Jinping, while attending the 27th Asia-Pacific Economic Cooperation (APEC) Informal Leaders’ Meeting via video link, said that “China will actively consider joining the CPTPP.” This was followed by the successful and timely conclusion of negotiations on the EU-China Comprehensive Agreement on Investments (CAI) on Dec. 30. Therefore, China’s bid to join the CPTPP is natural.

Over the past year, China has had informal contacts with the CPTPP members in accordance with the relevant provisions of the agreement. It is clear that China’s decision to apply comes after a comprehensive study and assessment of the terms and conditions of membership. In recent years, China has kept deepening its reform and opening-up. It has pressed ahead with reforms to streamline administration, delegate power and improve government services, pushed forward its state-owned enterprise reforms and enhanced the building of free trade zones. All of these have boosted China’s chances of being accepted into the CPTPP.

If China succeeds, it would benefit both sides. Experts estimate that accession to the CPTPP will raise China’s GDP growth by 0.74-2.27 percentage points and its exports by 4.69-10.25 percentage points, depending on different scenarios. China needs the help of the CPTPP to overcome the current difficulties in its reform and opening-up as the CPTPP is a next-generation trade agreement of the highest standard and a high-standard template for future trade agreements. On the other hand, the CPTPP also needs to further expand and enhance its influence. So far, the CPTPP is the largest free trade area in the Asia-Pacific region and the third-largest in the world. With China, the CPTPP would cover one-third of the global GDP and include nearly 2 billion people, making it the world’s largest regional free trade area. China’s membership of the CPTPP will be conducive to regional economic integration in the Asia-Pacific region. In the short-term, it would also facilitate economic recovery, trade development and investment growth in the post-pandemic world.

Joining CPTPP as soon as possible has become the latest goal of China to advance market-oriented reforms and institutional opening-up. The global landscape is changing due to the emergence of great power competition and the Covid-19 pandemic. China’s application to join the CPTPP has both political and economic implications. It would help China get itself out of the crisis of international isolation and facilitate the implementation of its dual circulation economic strategy. As the next step, China can follow relevant procedures of the CPTPP and conduct necessary consultations with each member. Admission to the CPTPP requires unanimous consent from all current members. This means that China’s acceptance into the CPTPP is not something that will happen overnight; the country will have to engage in time-consuming, tough negotiations. Some people overseas even claim that China may not be able to launch formal trade negotiations with certain member countries given their strained bilateral relations.

To this end, relevant departments need to be prepared for the worst, maintain patience and determination, and avoid rushing or stopping halfway. It should also be recognized that, to join the CPTPP, China cannot rely solely on the size of its market or economy. It will have to conduct a series of substantial market-oriented reforms and opening-up. Therefore, China needs to be aware of the gap between the CPTPP requirements and its existing international obligations and begin to expand common ground. This is where China needs to be putting in the hard work. The harder China works, the more proactive it can be in the negotiation process.

The CPTPP has “comprehensive and progressive” in its name because it not only maintains a strong commitment to reducing tariffs and eliminating non-tariff barriers, but also sets higher standards on certain issues in the areas of competitive neutrality, intellectual property rights, environmental protection, labor rights and government procurement. Domestic and international analysts generally agree that issues such as state-owned enterprises (SOE), labor and electronic data are the main obstacles to China’s entry into the CPTPP. With regard to the CPTPP rules, China does not have to limit its options to either accepting all the terms and conditions or not joining the pack. In the follow-up consultations, besides listening to exiting members’ demands, China could make reasonable demands from its point of view. It is worth noting that some domestic advocates have argued that China should push hard for exceptions under the CPTPP. However, the CPTPP rules are generally in line with China’s strategic orientation toward greater reform and opening-up of its economy. The CPTPP represents the future direction of the global multilateral trading system, and creating exception clauses could drag down the entire economy. In addition, demanding extensive exceptions is also unfair to the member countries that have worked hard to join the CPTPP. It may even lower the standard of the CPTPP, which would undoubtedly be difficult for members to accept.

China’s application to join the CPTPP is generally seen as positive both at home and abroad, however, some doubts have been raised. Domestically, some are concerned about the potential impact and challenges this move may bring. For sure, China will feel the impact to varying degrees in some areas within a certain period of time. But then, what would be the point of joining the CPTPP if it poses no challenge to China’s existing system at all? The Chinese people need to have confidence in China’s resilience. More importantly, they should take a long-term view of the changing challenges, and further enhance the country’s resilience by deepening the reform and expanding the opening-up.

For China, joining the CPTPP is not like grabbing a low-hanging fruit, but rather a fruit that China can only reach by stretching and standing on its toes, as was the case with its accession to the World Trade Organization (WTO) at the turn of the century. Back then, China underwent lengthy negotiations ⁠— in China it is said that the process was so long that the negotiators’ hair turned grey ⁠— and amended tens of thousands of laws and regulations. Pros and cons were widely discussed among its political, business, and academic communities. This made ordinary people gain a basic understanding of the WTO and the whole process was essentially a collective learning experience of globalization for the nation. China’s accession to the WTO has become a powerful engine of the country’s rapid economic growth since. To gain membership of the CPTPP, China needs to learn from its successful experiences and let the Chinese people know that China’s entry into the CPTPP will create a perfect window of opportunity for the country to deepen domestic reform and opening-up, which will be the best way for China to cope with internal and external challenges.