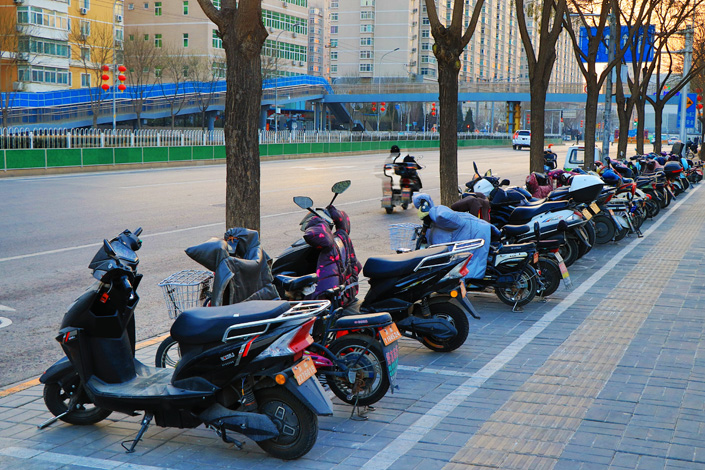 Electric bicycles are parked in a row on a street in Beijing on Jan. 30. Photo: VCG

Two recent e-bike battery fires in China’s capital — one of which turned deadly — have put a spotlight on the limited options for riders to safely charge their bikes in the world’s largest market for the vehicles, as authorities step up bans on doing so at home.

Five people were killed in a fire in a residential complex last week in Beijing after a lithium e-bike battery being charged by a resident inside his apartment exploded in the middle of the night, with flames soon spreading to other floors of the building, according to a social media post from the city fire service (link in Chinese).

A few days later a second incident occurred in the capital when an e-bike burst into flames and later exploded while being ridden, although nobody was hurt.

These are just the latest incidents involving e-bikes and their batteries that number in the thousands each year, even as stricter regulations on indoor charging to prevent building fires and few outdoor options leave riders in a bind, despite there being roughly 300 million on China’s roads.

That number dwarfs the just 9.7 million public charging stations for e-bikes across China in 2020, with growth climbing at a paltry 6.8% in 2019, according to market research institute Zero Power Intelligence.

Meanwhile, the fire risk from e-bikes remains unabated, with a total of 6,462 fires caused by e-bikes have been reported across the country between January and July 20, of which 62.1% were linked to lithium batteries, the authority’s data (link in Chinese) shows. These were mainly caused by overcharging, battery cell failure or electrical short circuits, according to the Fire and Rescue Department under the Ministry of Emergency Management.

The two types of batteries currently used in e-bikes across China are the traditional lead-acid type and lithium-ion, whose fire risk has risen to prominence after a number of high-profile global incidents and product recalls involving mobile phones and electric cars.

In 2016, South Korean phone maker Samsung issued one of the largest recalls in history of 2.5 million Note 7 smartphones, due to fires caused by faulty batteries, while fires in Chevy Volts and Tesla Model S vehicles also gained wide media exposure, according to a report last August in the Journal of The Electrochemical Society.

Unlike the lithium batteries, lead-acid battery production chains in China are very standardized after years of development, said Wang Zidong, the director of Electric Vehicle Major Battery Test Center under the National High-tech R&D Program — or 863 Program — which was approved by the late Deng Xiaoping in the 1980s to boost China’s high-tech development.

However, e-bike producers are not responsible for providing batteries, with customers selecting their own, which may lead newcomers to purchase those made by unknown producers, Wang added.

To follow up, through to Friday (link in Chinese), the Beijing Comprehensive Emergency Rescue Detachment had dispatched 65 teams to inspect the e-bike charging compliance in 358 neighborhoods and confiscated more than 60 bikes that were in violation of the rules.

However, few compounds can offer such public spaces for riders, forcing riders to charge their bikes in other often hazardous ways.

Last year a survey (link in Chinese) by the city government of Nanjing revealed that only 59% of respondents lived in compounds that were equipped with public charging stations for e-bikes, and some that did have access to public facilities often didn’t use them due to a lack of vacant chargers, high fees and the distance between their home and the stations.

To address the fire hazard issue, the Ministry of Industry and Information Technology released guidelines for e-bike production in 2018, which emphasized fire safety.

But the guidelines are still insufficient, says Zhang Yingcong, a researcher at the Shenyang Fire Science and Technology Research Institute under the northeastern Chinese city’s National Emergency Management Bureau.

“A lot of suggestions were made for the national standards, but they were not adopted because of concerns about cost increases,” he told Caixin.