By Lauly Li and Cheng Ting-fang 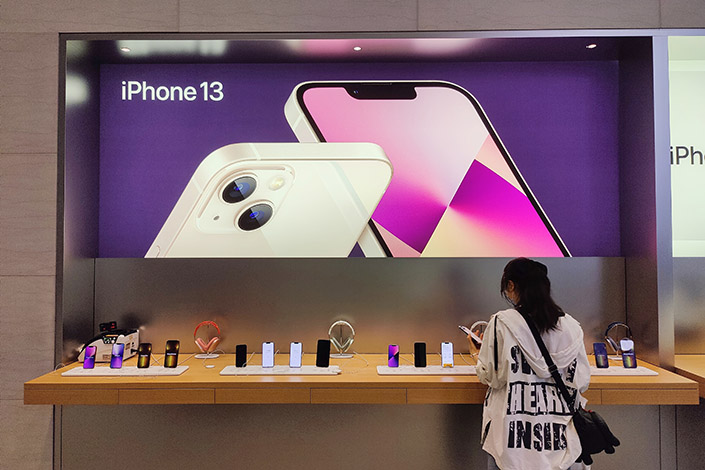 A consumer checks out iphone13 series products Sunday at an Apple store in Beijing. Photo: VCG

(Nikkei Asia) — Several key Apple and Tesla suppliers have halted production at some of their Chinese facilities to comply with Beijing’s tighter energy consumption policy, putting supply-chain continuity at risk during a peak season for electronics goods including the latest iPhones.

Eson Precision Engineering, an affiliate of Foxconn — the world’s biggest iPhone assembler — and a key mechanical parts supplier for Apple and Tesla, on Sunday said it suspended its production from Sunday until Friday at its facilities in the Chinese city of Kunshan in direct response to the city’s policy of stopping electricity supply for industrial use.

“The company will leverage its inventory to maintain the operation while production is halted,” Eson said in a filing with the Taiwan stock exchange. “We expect to arrange production on the weekends or in the upcoming holidays [next month] to meet customers’ needs.”

China’s crackdown on energy consumption comes from a combination of reasons — surging coal and natural gas prices, as well as Beijing’s effort to cut emissions and an increase in energy demand — and is impacting a wide range of industries. It comes at a time when global markets have been shaken by the debt crisis engulfing China Evergrande Group, one of the country’s leading property developers.

Unimicron Technology, a major print circuit-board maker and key Apple supplier, said its subsidiaries in the Chinese cities of Suzhou and Kunshan in Jiangsu Province also needed to stop production from Sunday noon till the end of the month. The Taiwanese company said it would mobilize production capacity in its other manufacturing sites to mitigate the impact, according to its stock-exchange filing on Sunday.

IPhone speaker component supplier Concraft Holding, which owns manufacturing facilities in the Chinese city of Suzhou, said in a stock- exchange filing that it would suspend production for five days until noon Thursday and utilize its inventory to support the demand.

Key iPhone assembler Pegatron, which operates massive production sites in both Kunshan and Suzhou, on Sunday night told Nikkei Asia its facilities were running as usual at the moment, but had already prepared power generators should the company receive further notice from the city governments.

To date, Foxconn’s manufacturing facilities in Longhua, Guanlan, Taiyuan and Zhengzhou — the world’s largest iPhone manufacturing complex — had not yet been affected by the power-supply restrictions as of Sunday, according to two people familiar with the matter.

Chang Wah Technology, a leading chip-packaging material maker supplying NXP, Infineon and ASE Tech Holding, said in a stock-exchange filing late Sunday it had to comply with the government’s call to stop production from the evening of Sept. 26 through the end of the month.

The production stoppage across several Chinese provinces could send another shock wave through the global tech and automotive supply chain, which has already suffered unprecedented chip and components shortages and is still experiencing disruptions from Covid variants in Vietnam and Malaysia.

The industrial electricity supply suspension comes amid Beijing’s recent intensified targeting of provinces including Liaoning, Jilin and Heilongjiang for failing to reduce their total energy consumption. Beijing has pledged to mete out stricter punishment for missing the goals. Other provinces, like Jiangsu, Zhejiang, and Guangdong, where many tech manufacturers are based, are among those subject to restrictions on industrial electricity supply.

Many small and midsize enterprises have also felt the energy pinch, as local governments seek to cope with Beijing’s new policies. “We also received a notice that electricity would be cut from Sept. 25 through 28 every day from 8 a.m. to midnight,” a Dongguan-based electronics supplier told Nikkei Asia. “We could only ask our production-line workers to take night shifts to rush some products out.”

The tighter controls have affected a wide sweep of traditional industries, encompassing coal and steel production as well as electronic goods manufacturing, which accounted for a large portion of China’s total exports in 2020.

What is more, the power-supply suspension creates uncertainty for tech supply-chain continuity in the coming months, which mark the busiest time of the year as businesses strive to meet Christmas demand.

Chinese President Xi Jinping last week told the United Nations General Assembly that China would not build any coal-fueled plants in the future as his country aims to shift to green energy. China has said it would control carbon emissions, which should peak by 2030 and then decline. The country’s ultimate goal is to reach carbon neutrality by 2060.