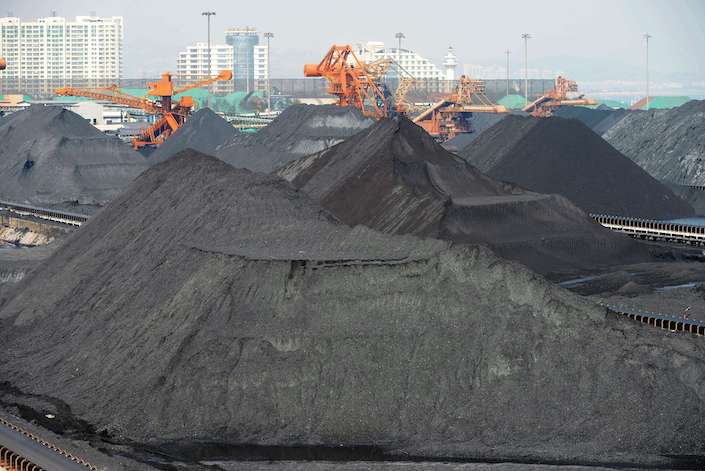 According to a Sept. 27 statement from the Guangdong Provincial Development and Reform Commission, power shortages stem from coal price hikes, tight supplies, and the reduced willingness of thermal power plants to generate electricity.

Recently, a worker at a local thermal power plant told Caixin that the current factory coal price is about 1,400 yuan ($216.9)/ton. Based on that, the electricity cost reaches 0.448 yuan/kWh. With all costs factored in, “the thermal power plant is running at a deficit,” the worker said.

According to an employee with a private power plant in Guangdong, on Sept. 16, the coal inventory of the provincial key power plants was less than 2.4 million tons, down nearly 60% year on year.

In fact, since late February, after measures to guarantee winter coal supplies were withdrawn, signs of domestic coal supply-demand imbalances appeared and prices began to rise. A March 5 report by the China Electricity Council (CEC) showed the China Electricity Coal Index (coastal index) price for 5,500 kcal/kg thermal coal was 584 yuan/ton, which nearly doubled to 1,086 yuan/ton on Sept. 27. In the week of Sept. 16 to Sept. 23 alone, the index surged by 9.7% from the previous month, setting a new high since the launch of the index.

On Sept. 27, a coal market analyst told Caixin that the spot price for 5,500 kcal/kg thermal coal at northern ports had risen to approximately 1,600 yuan/ton, 1.6 times above the same period last year. “I have been in this business for more than ten years, and I have never seen anything like this,” he added.

“The biggest feature of this year is the extremely strong demand,” said an industry expert close to policy-makers, who said fast growth in consumption is an important factor driving up the price of coal.

According to the National Energy Administration (NEA), Chinese electricity consumption from January to August reached 5.47 trillion kWh, up 13.8% YoY; utilization hours of thermal power equipment were 2,988, up 9.53% YoY. Historically, such growth is very unusual. Compared with pre-pandemic levels, in the first eight months of 2019, electricity consumption in China increased by only 4.4% YoY, and utilization hours of thermal power equipment decreased by 3.64% YoY.

A key factor behind the rapid growth of electricity consumption in China is the post-pandemic economic recovery, including the growth of overseas demand.

However, coal supply has failed to match rapid demand growth. According to the China National Coal Association (CNCA), coal consumption was about 2.1 billion tons in the first half of the year, up 10.7% YoY. In the same period, raw coal output of enterprises above the designated size increased by only 6.4% YoY to 1.95 billion tons. Meanwhile, coal imports decreased by 19.7% YoY.

In China, 90% of coal consumed comes from domestic coal producers. However, it is difficult to realize substantial growth in coal output to meet surging demand.

For safety reasons, mines’ legally-approved capacity generally falls below actual capacity. In the past, coal production exceeding approved levels has been common. From 2020, the coal-rich Inner Inner Mongolia autonomous region (Hohhot) launched a campaign against coal-related corruption. In May 2020, Inner Mongolia implemented a strict policy requiring mines to produce within approved limits. The policy had a big impact on illegal “off-balance-sheet capacity,” which in turn pushed down output in major coal-producing areas. In 2021, strict enforcement of capacity limits spread to other major coal-producing areas.

According to new regulations in Amendment (XI) to the Criminal Law that took effect on March 1, anyone who engages in mining and other activities that involve work safety, without approval or permission, shall be sentenced to imprisonment of up to one year, criminal detention or control, if there are casualties, accidents or danger that causes serious consequences. Industry participants understand this regulation means any illegal “overproduction” will be met with criminal penalties.

Another factor limiting production: the crackdown by safety and environmental protection authorities. For example, from the end of May to the beginning of June 2021, three coal mining accidents occurred in Henan. As a result, many coal mines were shut down for rectification. Under normal circumstances, these coal mines contribute about 20 million tons of production.

Moreover, to achieve mandated targets for peak carbon dioxide emissions and carbon neutrality, local governments have tightened regulations on high energy-consuming industries, which has also has hurt production of upstream coal. The Inner Mongolian city of Ordos is home to many high energy-consuming industries. According to local coal traders, coal mines in the city implemented power rationing measures at night in August.

It is also worth noting that in 2021, as the global economy recovers and coal demand remains high, imported coal is in tight supply with prices up sharply in China.

As of Sept. 23, the spot price of thermal coal at the Port of Newcastle was $188.72/ton, a 3.35% rise compared to a week earlier, and up 215% YoY. “With the transportation cost taken into account, there is no price advantage for imported coal,” said the analyst.

From July 2021, the NDRC put a series of measures in place to guarantee coal supply, including providing reserve coal to the market, encouraging qualified coal mines to increase capacity and allowing some coal mines to extend their trial run period for one year. However, these measures have yet to deliver any good results. It is very hard to increase coal production and supply in a short time because complicated procedures need to be managed and the interests of related parties need to be coordinated.

“It is understood that Ordos has applied for permission to increase its coal production capacity by 150 million tons. However, the authority only allowed an increase of 40 million tons, and the production capacity has not been completely released,” an analyst said. According to the analyst, there was no obvious increase in the daily coal output in September from August levels in Ordos.

On Sept. 25, the centralized signing of medium- and long-term agreements between coal companies and power generation and heat supply companies in northeast China came to an end. Northeast China is expected to experience the most severe coal supply challenges this winter. However, the centralized signing has yet to be completely finished nationwide. On Sept. 27, a senior manager of a state-owned power plant in Jiangsu told a Caixin reporter that because the market coal price is higher than the coal procurement price of coal companies, it is not easy for coal companies to procure enough coal. Currently, China Shenhua Energy Company Limited and some other coal companies find it hard to effectively implement medium-and-long term agreements. He expects that the current situation will last until the end of 2021.