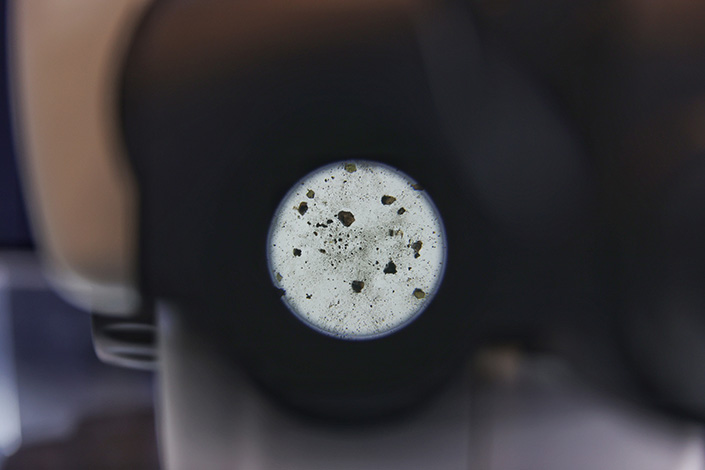 Lunar samples brought back by China’s Chang’e 5 mission showed the moon was volcanically active far later than previously known, offering fresh insight that could help scientists better understand the history of other celestial bodies in the solar system, according to an international study.

Researchers found that two fragments of lava brought to Earth by the Chinese mission — the first moon landing in more than four decades — were around 1.96 billion years old, according to a study published in the journal Science Thursday. The finding marked the latest volcanic eruptions identified on the moon by any country.

“This is the youngest-ever lava flow dated from the Moon,” Katherine Joy, a planetary scientist at the University of Manchester and co-author of the study, said in a report by the British scientific journal Nature. Previously, missions carried out by the U.S. and the Soviet Union found lunar volcanic activity about 2.9 billion years ago, based on samples they retrieved.

Last December, the Chang’e 5 return capsule touched down in North China’s Inner Mongolia autonomous region with about 2 kilograms of rock collected from the Oceanus Procellarum region, known as the site of the youngest basalt lava on the moon.

The Nature report said the new findings fill a vital gap in lunar geology and will help scientists understand the history of other celestial bodies in the solar system.

The age of the samples was determined by studying the number of impact craters on the moon surface as older surfaces have more craters, researchers said.

Gretchen Benedix, a co-author of the study and professor at Australia’s Curtin University’s Space Science and Technology Center, said in a university press release that the findings would provide scientists with more calibration points for cratering chronology, enabling them to age planetary surfaces more accurately and at higher resolution.

She added, “These results confirm what experts had long predicted based on remotely obtained images of the Moon and raise further questions as to why these young basalts exist.”

It is challenging to explain the thermal evolution of young volcanos on smaller planetary bodies such as the moon, according to the study.

“The task will now turn to finding a mechanism that will explain how this relatively recent heating of the Moon may have supported the formation of basaltic magmas with temperatures exceeding 1,000 degrees Celsius — and ultimately help researchers improve age dating of the entire Solar System,” Benedix was quoted as saying.

The study also provided an explanation that tidal heating or a distinct source mineralogy supporting lower melting temperature of the mantle may lead to the eruptions.

The study was conducted by a team of international researchers, with analyses on the samples carried out at the Beijing SHRIMP center, a laboratory of the Institute of Geology of Chinese Academy of Geological Science. In July, the China National Space Administration handed over the first batch of lunar samples to scientists from different organizations for further analysis, a government report said.