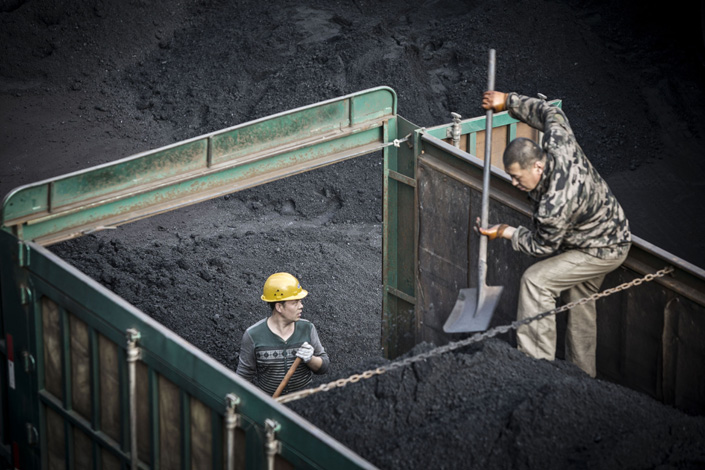 Employees unload coal from a truck at a mine and processing facility in Liulin, North China’s Shanxi province, in May 2016. Photo: Bloomberg

(Bloomberg) — Thermal coal futures surged to a record for a second day in China as another key mining region suffered flooding, complicating efforts to boost supply and halt an escalating energy crisis.

Two mines in Shaanxi province have been impacted by heavy rainfall, the Securities Times reported, adding to issues in neighboring Shanxi, the country’s biggest coal-producing region. Floods closed 60 of the 682 coal mines in Shanxi in recent days, though some sites are now slowly resuming operations.

Ensuring coal supply has become a top priority in Beijing even as the country plans for a carbon-neutral future. Premier Li Keqiang stressed the importance of energy security to China’s continued development in a speech released Monday night, in which he reiterated the country’s plans to keep investing in coal, at least in the near term.

Coal’s standing in China’s energy picture is hard to overstate. The country mines and burns more than half the world’s supply, and it accounts for 64% of the country’s power generation. Prices have soared this year as mine output failed to keep up with surging post-pandemic demand, depleting inventories.

Shortages and high prices have led to power cuts to factories in most of the country as the government prioritizes supplies for home heating in the winter. That could translate into a 30% slowdown in activity in the most energy-intensive sectors such as steel, chemicals and cement-making, according to UBS Group AG.

China has taken drastic steps in recent weeks to alleviate the situation, including telling miners to spare no costs to boost output, and allowing power prices to rise in order to encourage generators to produce more electricity.