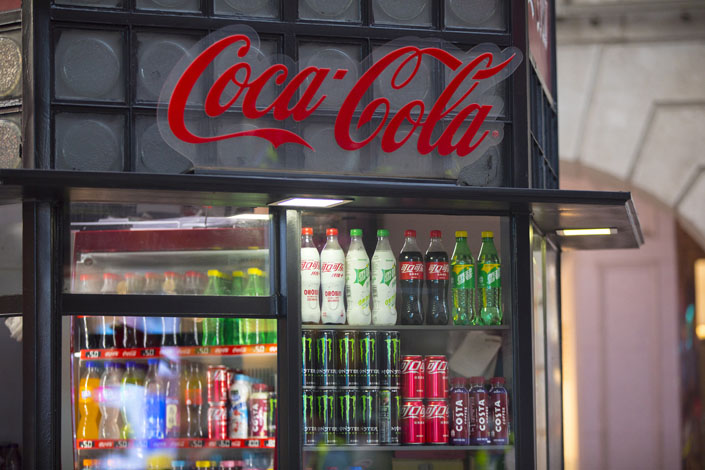 A Coca-Cola beverage cabinet in Shanghai on Sept. 30. Photo: VCG

Facing challenges from domestic brands and rising production costs, a bottler of Coca-Cola Co., one of the world’s largest non-alcoholic beverage makers, says it can remain competitive in China’s soft-drink market thanks to its strong sales network and ability to rapidly connect new products with consumers.

The remarks, made by Su Wei, president of Swire Coca-Cola Ltd. during an interview with Caixin on Sunday, come as several local upstarts are becoming increasingly popular with Chinese consumers even though they sell some of their products at higher prices than Coca-Cola.

Genki Forest Inc. is among those local brands that are posing a threat to Coca-Cola in China. Founded in 2016, Genki Forest launched a sugar-free sparkling drink in 2018, which the company said was its key growth driver in 2020, when sales revenue rose nearly 300% year-on-year to about 3 billion yuan ($465 million).

While acknowledging Genki Forest’s success, Su sought to talk up Coca-Cola’s massive physical and digital sales and distribution systems made up of e-commerce platforms, supermarkets, convenience stores, restaurants and even street stalls which she said are helpful in letting the company’s new products reach consumers at a faster pace than rivals.

According to Su, Swire Coca-Cola, which has served as a Coca-Cola bottling and sales partner since 1965 with a global footprint spanning the U.S. and China, uses Internet of Things technology to monitor the operations of its more than 800,000 refrigerators in China, including the number of door openings and real-time temperatures. He also said the firm dispatches staff to rearrange how Coca-Cola products are placed in a refrigerator if the machine shows sales figures do not match door opening numbers.

Su voiced concerns about the soaring prices of ingredients and packaging materials like fructose and aluminum, in line with the anxiety expressed by Coca-Cola Chief Financial Officer John Murphy during an April earnings conference call, when he said that the company would raise prices in the second half of this year or next year as part of inflation management efforts to offset rising commodity costs.

Earlier this month, Swire Coca-Cola started construction of a new plant in Zhengzhou, the capital city of Central China’s Henan province, with an investment of 900 million yuan. It is the largest single investment the company has ever made in the country, where it runs 18 factories in 12 provinces.

The Zhengzhou factory is scheduled to begin operations within about two years with a maximum production capacity of 1 million tons, according to Xu Yonggang, general manager of Swire Coca-Cola’s Zhengzhou branch.

Since the beginning of 2020, Swire Coca-Cola has added nine production lines in the Chinese mainland, with increased spending on branding and sales network expansion, according to Dang Jian, the company’s China CEO.

Swire Coca-Cola said that it plans to invest more than 5.5 billion yuan in factory infrastructure and build 20 new production lines in China in the next five years.

In the first half of the year, the company’s revenue in the Chinese mainland grew 25% year-on-year to 13.47 billion yuan, with profit from the region accounting for nearly 70% of the company’s total, according to China Daily.

Read more
How Coca-Cola Put Its Own Health First