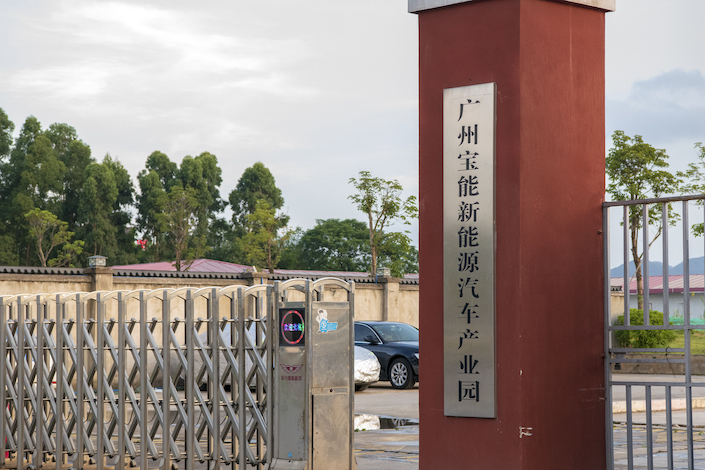 Between 2017 and 2020, Baoneng Motors spent 869 million yuan to acquire 1 million square meters of land in Guangzhou for the NEV industrial park project.

The loan was issued in May 2020 with a maturity period of 15 months. It raised funds to develop Baoneng’s NEV project, which started in 2017 but has made little progress so far.

The Baoneng capital crunch came into the spotlight since the beginning of this year. With 200 billion yuan of debt, Baoneng faces employees demanding unpaid wages, suppliers clamoring for overdue payments and creditors seeking loan payments.

China Railway Trust said a court in Chengdu ordered a freeze on some of Baoneng’s assets, including land use rights, properties, equities and guarantors’ accounts, to recoup losses from the defaulted loan.

Yao, Baoneng’s 51-year-old founder and chairman, started Baoneng Motors in 2017 with registered capital of 1 billion yuan. The same year, the auto unit acquired a 51% stake in Qoros Auto Co. Ltd., a small Shanghai-based automaker, for 6.5 billion yuan. A year later, Baoneng spent an additional 1.56 billion yuan to increase its stake in Qoros to 63%.

In 2019, Baoneng took over French automaker PSA’s joint venture with Changan Automobile Co. Changan disclosed that it sold its 50% stake in the joint venture to Baoneng for 1.63 billion yuan. PSA didn’t disclose the value of its deal with Baoneng. Yao vowed to invest 10 billion yuan annually in the five years starting in 2018 to develop new vehicles and launch 26 models by 2022.

Between 2017 and 2020, Baoneng Motors spent 869 million yuan to acquire 1 million square meters of land in Guangzhou for the NEV industrial park project. But the land plot has largely remained idle and Baoneng Motors hasn’t produced a single car so far. The Guangzhou industrial park obtained billions of yuan of financing through the issuance of trust products.

In June, Baoneng said the Guangzhou government agreed to provide 12 billion yuan of strategic investment to Baoneng Motors as a rescue. Caixin learned that only 2.4 billion yuan of the investment fund arrived at Baoneng by early September.

Starting in the 2020 second half, Baoneng tried to repay debt by selling assets, but there are few of them that can generate cash quickly.

“All its land and office buildings have been used for collateral on its loans, and the interest rates are not low,” said one person familiar with the matter. The only liquid assets are Baoneng’s holdings of listed companies’ shares.

Since the 2020 second half, Qian Hai Life Insurance Co. Ltd., another core subsidiary of Baoneng, has offloaded more than 370 million publicly traded shares.