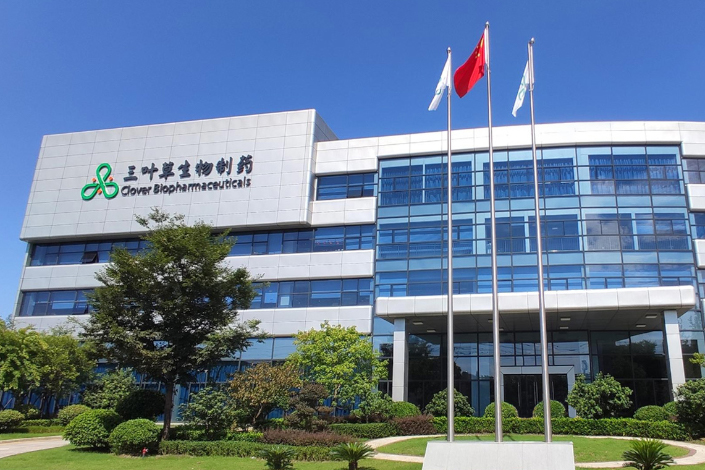 A money-losing Chinese biotech startup with a highly promising Covid-19 vaccine candidate is on course to list in Hong Kong.

Clover Biopharmaceuticals Ltd., which last month completed a late stage human trial of its two-shot protein-based Covid-19 vaccine, has received approval to go public on the Hong Kong Stock Exchange, according to a post-hearing information pack filed on Monday.

The Chengdu-based company did not disclose how much money it aims to raise from the IPO, which will be sponsored by Goldman Sachs and China International Capital Corp., according to the document.

But Clover appears to be the furthest along on a Covid-19 vaccine, after it last month completed a combined phase 2/3 trial of its SCB-2019 protein-based vaccine which spanned four continents.  The vaccine sparks an immune response by using an antigen developed by the firm that is similar to the the spike protein which enables the SARS-CoV-2 virus to infect human cells.

Data from the trial have not been peer-reviewed, but the company published results by press release last month which claim the vaccine candidate is 67% effective at preventing Covid-19 of any severity caused by any coronavirus strain.  The trial also showed the vaccine was safe, it said.

Significantly, the trial showed 79% efficacy at preventing infections from the highly infectious Covid-19 delta strain, and was 100% effective at preventing severe illness and hospitalization, according to the firm, which did not explain why that might be.

Those data were considered “very encouraging” by Dr. Richard Hatchett, CEO of the Coalition for Epidemic Preparedness Innovations, a global non-profit charged with fast-tracking the development of vaccines and ensuring their equitable distribution.

Public–private global health partnership GAVI has demonstrated its support for the vaccine through several rounds of funding totaling more than $360 million, according to the group — funding that will ensure Clover delivers 414 million shots to its COVAX program if the World Health Organization (WHO) approves the shot.

“[SCB-2019] will be a crucial addition to our weaponry in the fight against Covid-19,” Dr Hatchett said in a statement last month.

Clover plans to submit conditional regulatory approval applications to the European Medicines Agency, China’s National Medical Products Administration and the WHO in the fourth quarter of 2021 in anticipation of bringing the vaccine to the market as early as the end of the year, according to the filing.

Clover is also developing vaccines for diseases including rabies, respiratory syncytial virus and influenza, as well as treatments for abdominal cancer and a rare form of spinal arthritis, according to its website.

Despite being unable to make money, the company has found favor with China’s local governments, from which it received subsidies of 20.4 million yuan in 2020 for its R&D and equipment procurement, up nearly 28% from 2019, the filing showed.

Last month, Clover said in a statement (link in Chinese) that it had obtained government approval to produce the SCB-2019 Covid-19 vaccine candidate at its manufacturing base in the eastern Chinese province of Zhejiang. The Zhejiang facility is expected to have a maximum annual production capacity of 1 billion vaccine doses, according to the company.

In February, Clover secured $230 million in a series C funding round from a group of investors led by Singapore’s state fund Temasek and GL Ventures.

Last month AIM Vaccine Co. Ltd, a Beijing-based company that says it is developing four jabs for Covid-19, resubmitted its application to list in Hong Kong two months after its initial application was rejected.

AIM Vaccine, which claims to be China’s second-largest vaccine firm by market share, produced about 60 million vaccine doses in 2020, ranking next to market leader China National Pharmaceutical Group Co. Ltd., according to a stock filing.