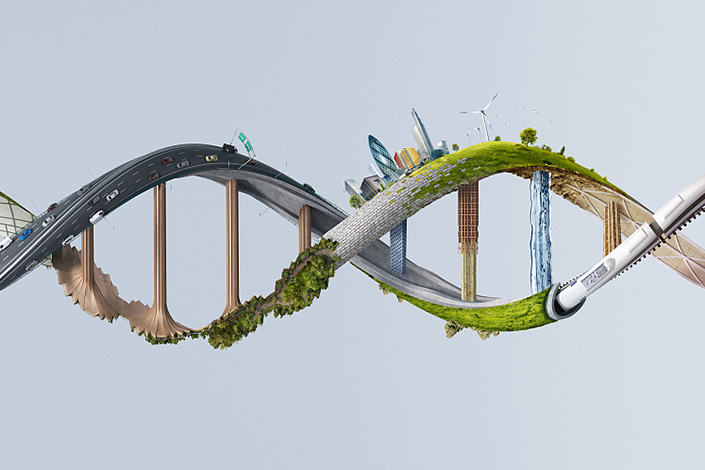 The concept of the circular economy is rising in importance, particularly as the U.N. climate conference COP26 approaches. Photo: VCG

(Oxford Analytica) — The circular economy concept was developed in 2013 and a study in July 2021 by Chatham House and Just Economics estimates that governments, firms and financial institutions invest around USD1.4tn per year in the circular economy. A circular economy is one that avoids waste and pollution, keeps materials in use and replenishes the natural world, helping to limit climate change and promote biodiversity.

In high- and middle-income nations especially, consumers will have to cut or adapt consumption if the circular economy is to flourish.

Asset managers are likely to see more demand for circular economy funds as part of the broader move to sustainable investment.

The circular economy process starts when products are designed to be reused, repaired or remanufactured. Products are broken down into components, which are made into new products, or biological ones, which return to the soil (in a “cradle-to-cradle” cycle). Circle Economy is a not-for-profit consultancy and its founder, Robert-Jan van Ogtrop, has said that “nature...is, in itself, a perfect ‘circle economy’.”

Urbanization, globalization and population growth are drivers of increasing waste and pollution; growing recognition of this is stoking calls for action. The main principle of the circular economy is “zero waste.” According to National Geographic magazine, more than 100 billion tons of raw materials are used annually, most of which ends up as pollution, for example, in landfill.

The circular economy contrasts with a linear “take, make, waste” model whereby raw materials are turned into products, sold, and then disposed of. A related “lease business model” is circular, as it involves sharing, renting, and leasing products instead of buying them.

Estimates suggest that 70% of greenhouse gas (GHG) emissions come from the production of everyday goods. Changes in energy systems alone will not deliver a net-zero economy. Behavioral change in industry, agriculture and land use is also required.

The Ellen MacArthur Foundation, a resource efficiency think-tank, sees plastic, food, fashion, finance and cities as the areas where shifting to a circular economy could have the most impact.

With more than 8 million tons of plastic entering the ocean per year (doing damage to marine ecosystems, tourism and fishing estimated at USD13bn), there could be more plastic than fish by weight in the sea by 2050. However, by 2040, adoption of a circular economy could cut the amount of plastic going into oceans by 80%, lowering GHG emissions and bringing annual savings of USD200bn, while creating 700,000 extra jobs.

The food system, and particularly industrial farming practices, are a leading source of GHG emissions and pollution. Almost one-third of food is wasted and nearly 10% of the world's population is classified as hungry according to the UN. Regenerative food production and waste elimination are key areas to focus on.

The fashion industry is one of the largest contributors to ocean pollution because of plastic microfibers. Industry and government can work together to redesign the way clothes are made and used. Approximately 87% of clothing is burned or buried in landfill per year, costing over USD100bn.

The Ellen MacArthur Foundation estimates that cities consume 75% of global natural resources, produce 50% of the world's waste and generate over 60% of GHG emissions. With an estimated 56% of humanity living in cities, their consumption of resources is disproportionately high. Introducing a circular economy in urban centers could generate large economic, social, and environmental benefits, and these would grow to 2050 by when the UN estimates that two-thirds of the world population will be urban-dwellers.

Circular economy funds can generate attractive risk-adjusted returns for investors while meeting ESG criteria. BlackRock’s circular economy fund now has more than USD2bn in assets under management. About half its investments are in Europe, with the materials and capital goods sectors accounting for over 40% of its exposure and its top (mostly large-cap) holdings including well-known companies such as semiconductor manufacturing equipment company ASML, software firm Microsoft, sportswear giant Nike, cosmetics company L’Oreal, and beverage-maker Coca Cola.

A more circular economy will improve the environment, improve soil health and reduce air, water and land pollution. This should help to combat climate change and increase biodiversity. Consumers might save money in the long term by using more modular products. There would be less reliance on natural resources to create new products. The circular economy could create jobs, particularly in niche areas. Innovation will be needed to improve efficiencies. Firms' supply chains could become more resilient, with less reliance on raw material prices.

At the same time:

Consumers will need to adapt to consuming less.

It could raise prices in the short term.

Unpredictable events such as the pandemic will increase the challenge -- for example, around 129 billion single-use face masks are now used per month, with each mask taking 450 years to decompose.

Current circularity models are oversimplified, and it can be hard -- with no standardized metrics -- to quantify the concept's impact on sustainability.

Only 9% of companies and governments were designed for a circular economy in 2019, according to the World Economic Forum. Few public companies have completely adopted a circular business model, but many brands including Levi's, Toshiba, and Smurfit Kappa have announced initiatives.

Governments are increasingly adopting policies to promote circularity. For example, the United Kingdom is planning to tax all plastic packaging made from less than 30% recycled plastic from 2022.

The European Commission’s action to promote circularity aligns with the EU’s priorities and global efforts on sustainable development. The European Green Deal, introduced in 2019, aims for a circular economy with a goal of climate neutrality by 2050. The EU’s Circular Economy Action Plan, adopted in March 2020, has taken effect this year. According to the Ellen MacArthur Foundation, a circular model could generate EUR600bn (USD694bn) of savings per year and bring EUR1.8tn of benefits to Europe's economy by 2030.