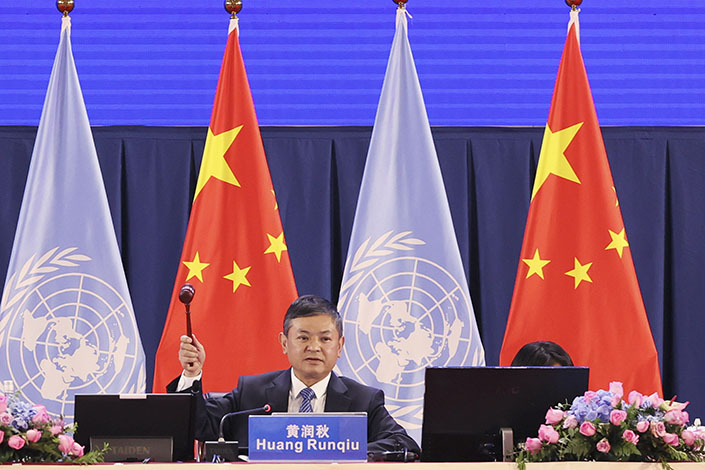 Minister of Ecology and Environment Huang Runqiu presides over the closing ceremony of the U.N. Conference on Biodiversity (phase 1) on Wedenesday in Kunming, Southwest China’s Yunnan province. Photo: VCG

The United Nations biodiversity conference in Southwest China’s Yunnan province concluded Friday with the adoption of the Kunming Declaration, and several countries have pledged new funding to promote biodiversity.

Under the declaration, more than 100 countries committed to ensuring the development, adoption and implementation of an effective post-2020 action plan for setting protection goals for global biodiversity over the next decade. The goal of the framework is “to reverse the current loss of biodiversity and ensure that biodiversity is put on a path to recovery by 2030 at the latest, towards the full realization of the 2050 Vision of ‘Living in Harmony with Nature’.”

Several countries also noted their plans for funding, according to the U.N. Japan has promised to add $17 million to its Japan Biodiversity Fund. The European Union agreed to double external funding for biodiversity. France’s President Emmanuel Macron pledged to use 30% of climate funds for biodiversity, while the U.K. announced that a significant part of its increased climate funding will be used for biodiversity.

The first part of the 15th meeting of the Conference of the Parties to the U.N. Convention on Biological Diversity (COP15) was held in the provincial capital city of Kunming from Monday to Friday. The conference will continue next year in Kunming with its second set meetings from April 25 to May 8.

The declaration noted the key elements needed for a post-2020 global biodiversity framework, including “phasing out and redirecting harmful subsidies and recognizing the full and effective participation of local communities and indigenous peoples, in helping monitor and review progress,” according to the U.N.

“The declaration made a reference to the 30×30 target, but did not indicate if Beijing is on board with it or not,” Li Shuo, global policy advisor for Greenpeace East Asia, said in a press release. “That’s a balancing act to recognize the growing momentum behind this goal while not prejudicing the multilateral process. Beijing should make up its mind soon if it wants to lead from the front.”

During the conference, many developing countries noted their need for more funding.

On Tuesday, President Xi Jinping pledged to set up a fund with an initial contribution of 1.5 billion yuan ($232.5 million) to support biodiversity in developing countries. He said China called on and welcomed other parties to contribute to the fund.

As a developing country, China’s declaration to establish the fund shows its willingness and determination, as well as its leadership and openness, said Fang Jie, chief representative of the World Resources Institute in Beijing. However, there are still many details to be explored and implemented about who and how the fund will be operated, Fang noted.

Li from Greenpeace East Asia also noted that “there are important questions such as what the specific purpose of the fund will be, the duration, the attributes and legal status, as well as whether it will be a Chinese fund or an international fund — as other countries have to consider these issues as they are invited to contribute to the fund.”