By Wang Bowen and Ding Yi 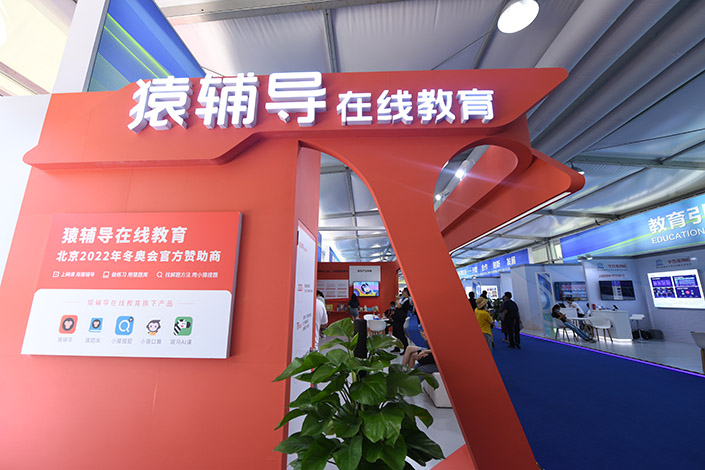 A Yuanfudao booth at the China International Fair for Trade in Services in Beijing in September 2020. Photo: VCG

Yuanfudao, which a year ago was China’s most highly valued private online tutoring startup, has denied it plans to pivot out of edtech in the face of the sweeping crackdown against the sector, saying a recent investment in an apparel company set up by its parent company would not distract it from its education focus.

Instead, a source close to the matter told Caixin that last month’s move by Yuanfudao’s parent company, Beijing Yuanli Education Technology Co. Ltd., to set up a wholly owned subsidiary to design and sell down jackets clothes was an effort by Yuanfudao founder Li Yong to invest in a business run by a former subordinate of his, Chen Mengcang.

On Friday, Yuanfudao issued a statement on social media that the newly established Beijing Bingyuan Garment Co. Ltd. “has nothing to do with Yuanfudao’s education business” and “will be operated by a special team independently.” The statement did not give specifics.

Industry insiders say a more likely explanation for the push into down-jacket marketing could be tied to Yuanfudao’s role as an official sponsor of the 2022 Winter Olympic and Paralympic Games in Beijing. According to official news agency Xinhua, Yuanfudao will develop Olympics-related courses and help promote winter sports in China as part of its sponsorship deal, announced in July 2020, when the company was nearing its highwater mark in valuation terms.

In October last year, Yuanfudao announced it had raised $2.2 billion in late-stage venture funding valuing the company at the time at $15.5 billion, according to TechCrunch.

The source told Caixin that Yuanfudao executives and employees consider the investment in Beijing Bingyuan Garment to reflect close ties between the Yuanfudao founder Li and Chen stretching back to when he was Li’s subordinate at NetEase from 2009 to 2012. Yuanfudao will not spend heavily in such a small garment business, the source added. Chen is named as legal representative of the new apparel unit, according to corporate information provider Tianyancha.

Private tutoring firms in China have been forced to recalibrate their businesses since July after authorities announced harsh measures that would turn them into nonprofit institutions, bar them from public market financing and prevent the creation of new businesses providing school curriculum subjects.

In its own move to diversify, Yuanfudao has recently launched a new brand, named Feixiang Planet, which is designed to provide education products and services to schools and governments, according the source. They said that a team has been set up to run the business, adding that Feixiang Planet is likely the company’s focus in the wake of the July regulations.

Yuanfudao’s domestic rivals have also scrambled to reorganize their businesses. For example, Baidu-backed online tutor Zuoyebang has begun selling its Go livestreaming courses on Alibaba’s Tmall Marketplace, which it said is supported by technologies like smart sparring partners.

However, the sector is struggling to retain the trust of parents following the regulatory crackdown. Earlier this month, U.S.-listed OneSmart International Education Group reportedly closed all of its off-campus tutoring programs and learning centers across China, sparking outrage from angry parents who have demanded refunds.