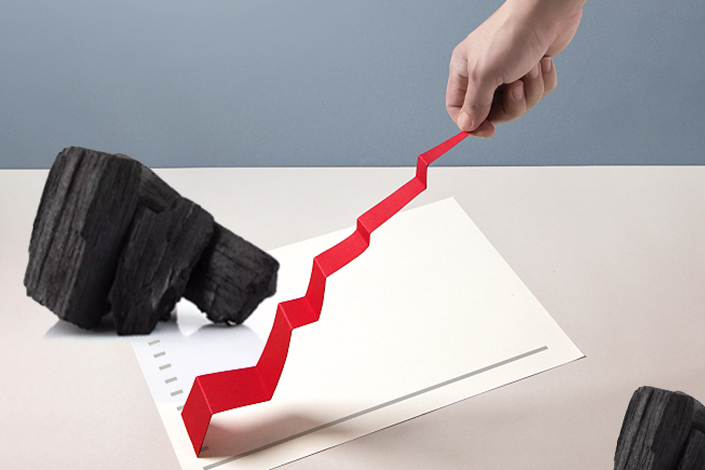 This week’s measures by the NDRC were the latest in a flurry of activity in recent months as officials seek to halt the rally in coal, which provides more than half the country’s energy. Photo: VCG

China’s top economic planner said it would consider limiting the fluctuation of coal prices, as the commodity’s soaring value continues to fuel a power crunch that is endangering energy security and economic growth.

The National Development and Reform Commission (NDRC) is “studying the establishment of a coal market price formation mechanism to guide the long-term stability of coal prices in a reasonable range,” it said in a statement on Tuesday (link in Chinese).

Officials are considering a coal pricing mechanism that weighs production costs, average profitability and market changes, and includes a “benchmark plus fluctuation” formula, the statement said.

It follows the NDRC’s announcement Monday that it will investigate coal index providers, following claims that some have falsified and manipulated transaction prices.

“Some coal and other energy information agencies had failed to use authentic transaction prices, abused the price quotation system, published ‘hearsay’ information, fabricated and issued fake price indices as well as manipulated price indices, which stoked speculation and as a result led to coal prices completely deviating from the fundamentals of supply and demand, seriously damaging the public interests of the nation and society,” the NDRC said in a statement (link in Chinese). It did not name the index providers.

The NDRC said it would set up joint work groups with related agencies and launch evaluations and compliance reviews on all influential coal price index providers. Providers found to have violated the rules face being added to a credit blacklist and having their publications suspended.

The most-active thermal coal contract on the Zhengzhou Commodity Exchange fell as much as 7.6% on Tuesday morning to 1,207 yuan ($189) a ton, the lowest intraday price in almost a month.

On May 11, the China Coal Transportation and Distribution Association (CCTD) said it would halt the publication of the CCTD Bohai Rim Price for spot thermal coal, citing “continuous and abnormal fluctuations in thermal coal markets.” The publication resumed nine days later.

This week’s measures by the NDRC were the latest in a flurry of activity in recent months as officials seek to halt the rally in coal, which provides more than half the country’s energy. Since late September, many parts of China have suffered electricity shortages that have forced factory shutdowns and blackouts. High coal prices and an associated plunge in inventories are said to be the main drivers, while a post-pandemic export boom and a government energy consumption reduction campaign are also thought to have contributed.

On Friday, the NDRC met with the China National Coal Association and major coal producers to discuss a clampdown on profiteering and measures to ensure price stability.

This month, the commission called on coal suppliers to sign a letter of commitment to cap coal prices. At least four major coal companies and two important coal ports have signed the letter.

At the same time, coal mines have been urged by the NDRC to operate at full capacity in the fourth quarter to achieve a daily output of at least 12 million tons, provided they can do so safely. As a result, coal inventory at power plants reached 95.69 million tons on Sunday, 17 million tons higher than levels at the end of September, according to the agency in a separate statement on Monday (link in Chinese).