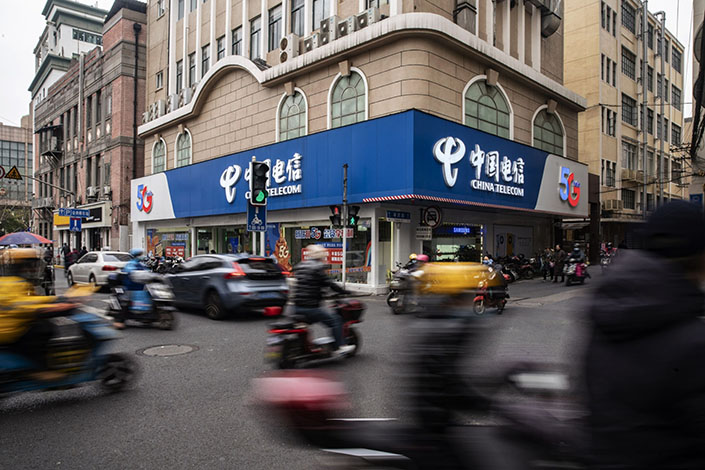 Traffic breezes past a China Telecom store in Shanghai on Jan. 6. Photo: Bloomberg

(Bloomberg) — A U.S. ban of China Telecom (Americas) Corp. by regulators shows that broad concerns about Beijing persist in Washington, even as the Biden administration takes steps to improve communications between the world’s biggest economies.

The U.S. Federal Communications Commission (FCC), an independent government agency overseen by Congress, on Tuesday voted 4-0 to cancel permission to operate in the U.S. for the unit of China Telecom, one of three leading communications providers in China.

Though the company doesn’t do a lot of business in the U.S., being barred from the market is significant coming on the heels of the moves against other strategic Chinese tech giants, including Huawei Technologies Co. Ltd.

“It’s an important action,” said Martijn Rasser, director of the technology and national security program at the Center for a New American Security in Washington. “It also sends a broader message to Beijing, that regardless of who’s president, the U.S. continues to be concerned about the risks posed by Chinese tech firms operating in the U.S.”

Leaders Joe Biden and Xi Jinping are expected to meet virtually later this year, as overall relations show signs of warming following a Sept. 9 phone call between them. Shortly afterward, the U.S. reached a deal to release Huawei Chief Financial Officer Meng Wanzhou from extradition proceedings in Canada — one of Beijing’s top demands.

Since then, the U.S. and China have moved to rebuild communication lines cut off during years of clashes during the Trump administration over everything from trade and Taiwan to tech and the origins of the coronavirus. Vice Premier Liu He and U.S. Treasury Secretary Janet Yellen this week held their second call in about four months, which China described as “pragmatic, candid and constructive.”

Still, areas of tension remain. In addition to U.S. sanctions and other punitive actions on Chinese officials and companies, the Biden administration’s overtures to Taiwan have angered Beijing. The Hang Seng Tech Index, which tracks mostly Chinese technology firms traded in Hong Kong, declined as much as 3.9% on Wednesday, the most in more than a month.

The case against China Telecom was first brought during former President Donald Trump’s administration, along with actions against China Unicom Americas Ltd., Pacific Networks Corp. and its subsidiary ComNet. The FCC is also moving toward ending authorizations for those companies.

The Trump administration pursued an aggressive strategy against China, using export controls, prohibitions and executive orders to block companies including China’s biggest technology company, Huawei, and chipmaker Semiconductor Manufacturing International Corp. The FCC has also stepped in with actions against Huawei, China Mobile Ltd. and others.

“Our record makes clear it operates as a subsidiary of a Chinese state-owned enterprise” giving the Chinese government the ability to control its actions, said acting FCC Chairwoman Jessica Rosenworcel. “That can lead to real problems with our telecommunications networks,” including surveillance and misrouted traffic.

Beijing-based China Telecom is one of the largest phone companies in China and the second-largest wireless carrier in China with 370 million subscribers, according to an Oct. 22 securities filing by the company. Along with China Mobile and China Unicom, it dominates the Chinese telecommunications market, according to a U.S. Senate report last year.

‘Arms of the government’

“The FCC action is long overdue,” said Derek Scissors, senior fellow at the American Enterprise Institute. “The Chinese telecom majors are arms of the government much more than they are commercial enterprises.”

China Telecom earlier told the agency it’s an independent business based in the U.S. and isn’t subject to Chinese government control.

“The FCC’s decision is disappointing,” Ge Yu, a China Telecom spokesman, said in an email. “We plan to pursue all available options while continuing to serve our customers.” There was no response to an email sent to the press contact at the Chinese embassy in Washington.

The FCC’s action shows that more moves against Chinese tech may be brewing, said Roslyn Layton, co-founder of the China Tech Threat website that tracks Chinese technology and suggests policies to bolster security.

“This move demonstrates that the FCC is not afraid to take action against the world’s big players,” Layton said in an email.

China Telecom needs to cease operations in the U.S. within 60 days of the FCC’s order being published, the agency said in a news release. The company’s U.S. business is dwarfed by its activities elsewhere.

The U.S. business’s contribution to the overall revenue and assets is small, China Telecom’s Chief Executive Officer Ke Ruiwen said during an earnings call in August 2020, without giving details. Its U.S. unit leases lines from American infrastructure providers and carriers to provide enterprise and wireless services.

“Essentially what they do is provide a very reliable domestic Chinese network for multinational companies in a variety of markets that are looking to access supply chain partners or customers. Conversely, they provide reliable U.S. connectivity for Chinese entities,” Byrne said.

“In the current environment, many Chinese operators and telecoms equipment vendors are being painted with the same brush — no real evidence of any misdoings but a general perception that they could commit some sort of malfeasance at the behest of Chinese government actors — corporate espionage or the like,” Byrne said. “And frankly there is no constituency at this moment for a U.S. politician or regulator appearing to take the side of the Chinese government.”

U.S. officials have said they get information about potential threats in confidential briefings.