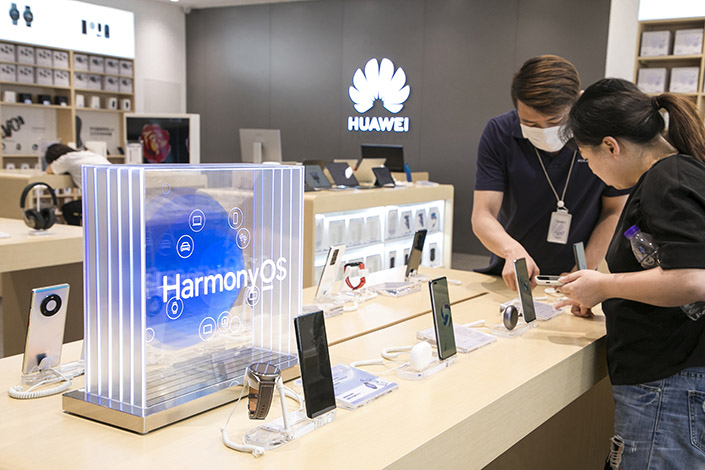 A customer checks out a smartphone equipped with HarmonyOS operating system in a Huawei store in Shanghai on July 28. Photo: VCG

And as the telecoms giant’s push into smart cars gathers pace, it is working to bring the home-grown operating system to displays in vehicle cockpits.

A new premium Seres SUV equipped with a HarmonyOS intelligent cockpit is expected to be launched at the end of this year or early next year, said Yu, who was appointed chief executive of the company’s smart car solutions business unit in May. The vehicle is jointly developed by Huawei and Chongqing-based automaker Sokon Industry Group Co. Ltd. (601127.SH).

At the Shanghai Auto Show in April, the companies unveiled the Seres SF5, featuring car components and smart cockpit solutions from Huawei. Branded as “Huawei Smart Selection” and being sold in Huawei flagship stores, the car received around 3,000 orders within two days of pre-sales starting on Apr. 20.

Since its foray into the competitive automotive space in April 2019, apart from Sokon, Huawei has announced smart EV tie-ups with BAIC BluePark New Energy Technology Co., Ltd., GAC Group Ltd. and Chongqing Changan Automobile Co. Ltd. to supply the three auto companies with “Huawei Inside,” its intelligent automotive solution that includes software functions such as autonomous driving, as well as hardware including lidar, millimeter-wave radars and centralized control panels.

According to Gong Ti, president of Huawei’s consumer business software department, compared with traditional vehicles, a smart cockpit powered by the HarmonyOS will enable interconnection between mobile phones and the vehicle itself, as well as supply the vehicle with a wider range of updated applications based on the OS’s ecosystem.

Huawei unveiled HarmonyOS in August 2019 as an alternative to Google’s Android OS, three months after it was placed on the U.S. “entity list,” depriving it of access to Android and Google Mobile Services, a collection of Google apps that often come preinstalled on Android-powered devices.

The telecoms giant has invested 50 billion yuan ($7.8 billion) in developing an ecosystem for HarmonyOS over the past three years. The system now has 1,800 partners with 4,000 products that can be syndicated or connected with Huawei’s system, Yu said.

Besides diversifying into the auto sector, Huawei has also brought HarmonyOS to industrial applications. Last month, the company launched a Harmony-based operating system for the National Energy Group that could replace the Linux, Unix and Windows operating systems currently in use on coal mining equipment.

The Kuanghong operating system adds more features, including a unified data protocol, which enables all underground mining equipment to use a single interface to transmit and gather data for analysis. The system is compatible with nearly 400 types of equipment used in coal mines, according to the company.

In February, Huawei opened a new lab in the northern Chinese city of Taiyuan, aiming to bring innovative technology to the mining industry. Huawei founder Ren Zhengfei previously said Huawei’s intelligence systems could help coal mining companies reduce the number of surface workers by 60% and underground miners by 10%–20% each shift.

As for its smartphone business, sales have been plunging due to the impact of U.S. sanctions. In the first quarter, Huawei sold 14.9 million smartphones in China, down 58.6% from the same period last year, according to market monitor IDC. Its market share fell to 15% in the same period, from its peak of 33% in the second quarter of 2020, according to a report from Counterpoint Research.

At a press briefing in September, rotating Chairman Eric Xu said Huawei expects to see revenue from its smartphone business drop by at least $30 to $40 billion this year. Last year, the business generated around $50 billion.