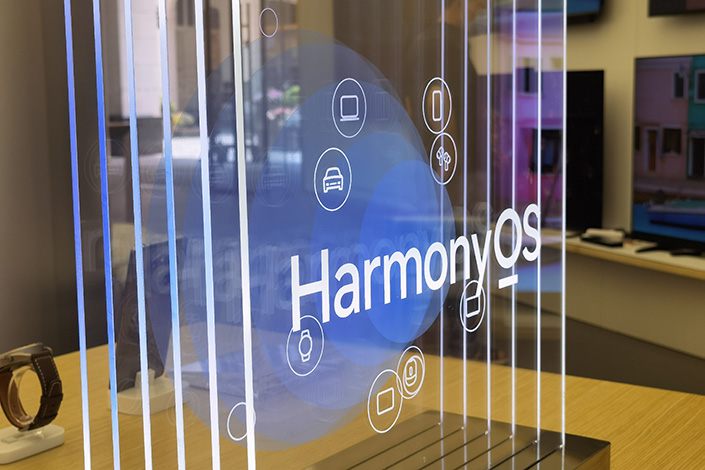 Known as “hongmeng” in Chinese, the development is of significance to more than just gadget-fans. Here are four things you should know:

It's an operating system like Android or iOS, but Huawei is keen to stress it’s about more than just smartphones. It’s in the news this week because on Thursday to great fanfare the company launched a range of smartphones, wearables and tablets that all use it.

HarmonyOS’ launch was necessitated by the company being put on U.S. blacklists that banned Android developer Google LLC from doing business with it, which in turn meant even Huawei’s exported phones could not use popular Android apps like Gmail and YouTube.

But the platform was supposedly in development for the past five years, which would predate U.S. sanctions. Some say the sanctions forced Huawei to speed up the system’s development, or even to roll HarmonyOS out prematurely because it had no other choice.

Huawei had already developed the core of the first edition of HarmonyOS, called Harmony 1.0, as of 2017. The company previously disclosed at its 2018 developer conference that it had planned to unveil the operating system in the spring of 2020. But it decided to speed up the process in light of the U.S.-China trade war that was raging at that time.

The company first showed the public Harmony 1.0 in August 2018, including its incorporation into several products including a smart monitor. At a developer conference last September where it first unveiled Harmony 2.0, Huawei said its ecosystem currently had about 96,000 apps — a fraction of the nearly 3 million tailored for Android at that time.

Huawei had previously said that it aims to have Harmony installed on 300 million devices by the end of this year, with about 200 million of those made by Huawei itself.

What is it for?

Like Android, Harmony is built on top of the Linux free open source operating system. It is designed to be used in highly sophisticated devices like cars or smartphones, but also on much simpler devices like appliances that don’t have nearly as much memory.

Huawei says the future will bring about a world of interconnected devices, but right now most of those run on a wide range of operating systems that make communication between them more difficult. “Siloed systems tend to complicate interconnectivity and operations, which have ultimately led to a fragmented user experience,” according to its release, adding Harmony provides a “common language for different kinds of devices to connect and collaborate.”

At the launch, the Huawei unveiled two smartphone models running HarmonyOS, as well as a smart watch and a tablet PC. The tablet, called the MatePad Pro, will sell for 4,999 yuan ($770) to 7,999 yuan.

It also released a few other devices, including wireless ear buds and two high-end monitors that will run on the operating system, and said roughly 100 Huawei devices will be upgraded to use it. Many of its existing products will become eligible for upgrades to HarmonyOS on a rolling basis over the next year, Huawei said in a statement.

3. Could it rival Google’s Android?

So far Huawei has inked agreements with a number of Chinese electronics firms, including home-appliance brands Midea and Joyoung and smartphone-maker Meizu, to integrate HarmonyOS into their products. But Wednesday’s launch didn’t announce any major new tie-ups.

The task of developing HarmonyOS grew in urgency after the U.S. first blocked Huawei from working with Google, cutting the Chinese company off from the Android operating system it was using in most of its smartphones. Huawei has continued to use a free version of Android since then, but was banned from installing the Google Play store on its phones sold outside China, making them far less attractive.

In the absence of some kind of radical policy change, there is no suggestion that Huawei’s main rivals like Xiaomi Corp, which can still do business with Google and has been eating the Chinese firm’s lunch when it comes to smartphone sales, will have any reason to use the HarmonyOS.

Probably not, which could be why the firm is placing so much emphasis on the Internet of Things in its marketing materials. While Xiaomi reported surging first-quarter revenue and profit growth on the back of increased global smartphone sales, Huawei continued to shed market share after selling its budget smartphone brand Honor in December.

The reason: U.S. sanctions have cut off the firm’s access to its advanced self-developed Kirin chips. Most of the products announced at Wednesday’s launch also use these chips.

Huawei was once China’s lead chip designer through its HiSilicon unit. But that unit was hobbled after the U.S. forced its manufacturing partner, TSMC, to stop working with HiSilicon. TSMC was one of only a very few companies in the world capable of producing the advanced chips. As a result, Huawei is believed to be working its way through a dwindling stockpile of Kirin chips.