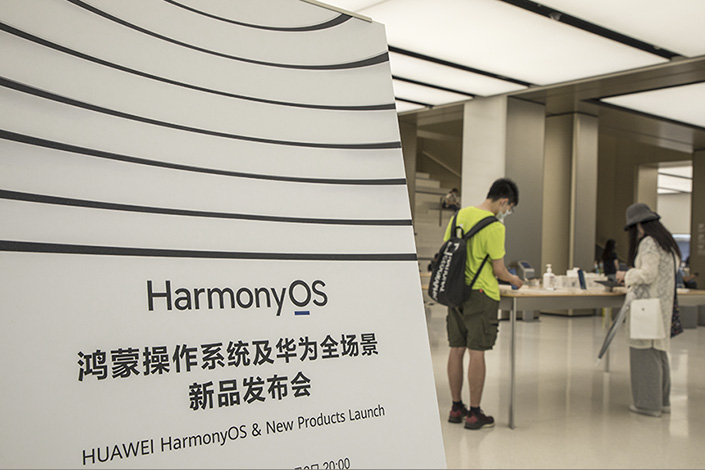 People try out Huawei smartphones at a HarmonyOS launch event on Wednesday in Shanghai. Photo: VCG

Is the world ready for another major smartphone operating system (OS) to compete with the dominant pair of Google’s Android and Apple’s iOS?

Embattled Chinese smartphone-maker Huawei Technologies hopes the answer is “yes,” as it prepares to unveil the first models using its homegrown Harmony operating system at an event late Wednesday. The company is making the move largely out of necessity, following U.S. sanctions that have cut off its access to many of the most important features on the Android system it has used up until now.

But the company will face a long uphill battle, and is following in a trail that has claimed casualties in the likes of software titan Microsoft and former leading cellphone-maker Nokia. One element that might work in its favor is its home field advantage, as China is currently home to five of top world’s top seven phone players – one of which was Huawei in the first quarter of this year.

While all of the Chinese brands currently use Android, some could experiment with the Huawei-developed OS with the launch of Harmony 2.0. Such experimentation could be partly market driven. But it could also be partly the result of pressure from Beijing to support one of the country’s earliest high-tech success stories, as Huawei suffers under the weight of U.S. sanctions that have cut it off from many of its American suppliers.

The company will try to make a splash both at home and abroad with its big launch event broadcast live over the internet from its hometown of Shenzhen. It has previously said it aims to have Harmony installed on 200 million devices by the end of this year, with about half of those made by Huawei itself.

So far Huawei has inked agreements with Chinese home-appliance makers Midea and Joyoung to integrate Harmony into their products. It has yet to announce any major smartphone-makers that will use the system, though such announcements could come at the launch event.

Speaking before the event, IDC analyst Bryan Ma said he didn’t expect the launch to have much of an impact on the smartphone market, though that’s not entirely the point. “Don’t forget Harmony OS isn’t just about phones,” he said. “In fact, I’m expecting they’ll probably do some stuff around wearables, maybe some stuff around TV and smart home and internet of things.”

Huawei began developing Harmony about five years ago with an aim of creating an operating system that could be adapted for use in a wide range of connected devices — from smartphones to home appliances, cars and even drones — in a future era often referred to as the internet of things. The system was still in development when Washington launched a series of sanctions against the company, initially severing the company’s ties with Google.

While Harmony may have many of the technical abilities of Android and iOS, one place it will be at a huge disadvantage is in apps it can offer. At a developer conference last September where it first unveiled Harmony 2.0, Huawei said the Harmony ecosystem currently had about 96,000 apps — a tiny fraction of the nearly 3 million tailored for Android at that time.

Many developers may be reluctant to develop Harmony versions of their apps due to lack of supporting Google and Apple features that normally come with Android and iOS, such as maps, video players and readers.

While the lack of apps means Harmony will already have its work cut out, an even bigger factor facing Huawei’s smartphone business is a newer round of sanctions by Washington dating back around a year that choked off the company’s supply of microchips. Such chips are the central brains of all phones, with Washington specifically targeting chips needed for the latest 5G models.

Thus, even if Harmony can find an audience inside or outside China, it would do little to help revive Huawei’s own smartphone business that is rapidly using up a dwindling stockpile of 5G chips.

“Even if Huawei were to get all the premier apps on board, it still doesn’t matter if they don’t have the raw materials to build the hardware,” said IDC’s Ma. “So the chips are the bigger gating factor at this point. That’s why Huawei’s smartphone shipments have been petering out lately because they have been pacing themselves with their remaining stockpile. And that actually is the bigger factor which kind of makes this services stuff a bit of a moot point.”