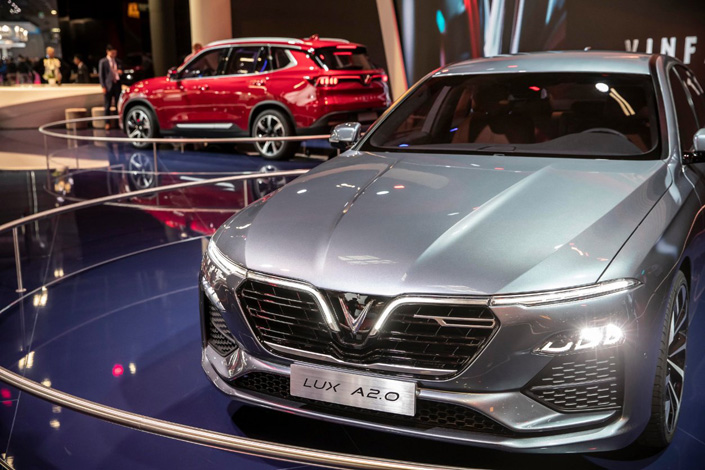 (Nikkei Asia) — Vingroup, Vietnam's largest conglomerate, is pulling out all the stops as it prepares to break into Western auto markets with its first electric vehicles, just a few years after its first foray into auto manufacturing.

Two electric models from subsidiary VinFast will be on display at next month's Los Angeles Auto Show in California. The company will begin taking orders in the U.S. and Europe in the first half of next year. Pricing and other details are expected to be announced on Nov. 17.

"We have made vigorous investments and conducted extensive market research to create premium EVs that will satisfy the desires of global customers. This is just the beginning," Vingroup Vice Chair Le Thi Thu Thuy said this month.

With electrics still facing hurdles to broader adoption in Vietnam, overseas markets will be essential for achieving Vingroup's goals for a business that the company is rapidly building into a core part of its portfolio.

VinFast has set an ambitious target of eventually selling 160,000 to 180,000 vehicles a year in the U.S., equivalent to 1% of all annual auto sales there.

The company is set to roll out its e34 electric sport utility vehicle in Vietnam this year. The car, priced at 690 million dong ($30,300), can run 300 km on a full charge. This will mark the first release of an electric model here by any major automaker, domestic or otherwise, with a base in the country -- a point that VinFast hopes will pique the interest of well-off consumers.

Vietnam's auto industry has responded with some surprise to the enthusiasm with which Vingroup has dived into the field, going so far as to make its own batteries in-house to keep costs down.

The conglomerate plans to invest nearly $400 million in a new battery plant in the central province of Ha Tinh. The facility, slated to open by next September, will start off with an annual capacity of 3 gigawatt-hours in the first phase, rising to 5 GWh in 2025.

The facility will produce lithium iron phosphate batteries, which do not use certain expensive materials, such as cobalt, found in standard lithium-ion batteries. Vingroup is expected to receive technical assistance from partner Gotion High-Tech, a major Chinese battery maker.

Profitability is still an issue. The company sold about 30,000 vehicles last year -- enough for about a 10% share of the Vietnamese market, but a far cry from the 250,000 it can make each year.

Vingroup's manufacturing segment, which centers on autos, logged a pretax loss of 11.3 trillion dong in the first half of 2021, more than double the red ink a year earlier. Viet Capital Securities estimates that VinFast will break even in terms of earnings before interest, tax, depreciation and amortization in 2026.

The conglomerate is focusing resources in autos and its core real estate business while slimming down elsewhere. It announced plans in late 2019 to shed its retail operations -- the largest in Vietnam -- and decided in May to exit smartphone and television production.

Founder and Chairman Pham Nhat Vuong has said that Vingroup's tenacity in pursuing its auto ambitions is "not for the company, but for the country." This may be linked to the desire of Vietnam's government and the ruling Communist Party to build up the country's auto industry.

By jumping into the electric vehicle market early on, before the pecking order is firmly established, Vingroup aims to carve out a foothold for itself in the industry. The conglomerate seeks a slice of the massive American and European markets, following Chinese players like SAIC Motor and XPeng Motors that have expanded into Europe.

Bolstering the brand will be crucial to making inroads in the U.S. and Europe. The U.S. is home to over 2 million people who were born in Vietnam or have Vietnamese ancestry, but Vingroup is little known there outside that group.

In a push for greater recognition, Vingroup is considering listing VinFast in the U.S. The group has said it is looking into a range of fundraising opportunities, and its unit could become the first Vietnamese business to debut in the U.S.

"If the IPO succeeds, Vingroup could both raise funds and gain name recognition at the same time," said an analyst at Tokyo-based Aizawa Securities.

But westward expansion also means competing with leading EV maker Tesla, as well as big-name automakers like Volkswagen. "Vingroup will need to make aggressive moves regardless of their impact on profitability until the brand is more established," the analyst said.