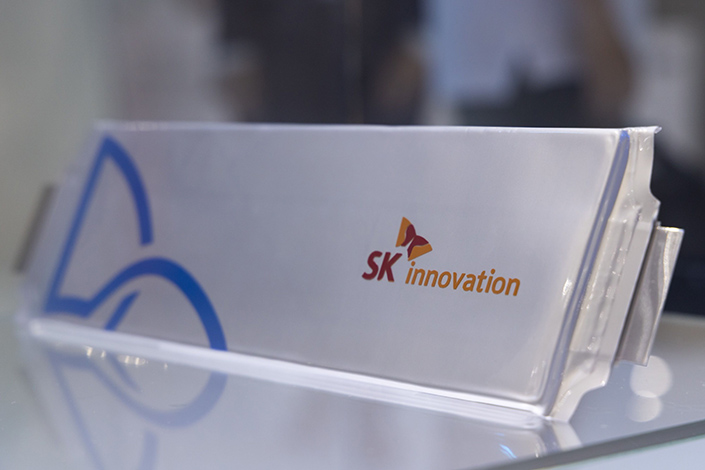 An SK Innovation battery cell for electric vehicle at the InterBattery 2021 in Seoul, South Korea, on June 9. Photographer: Bloomberg

(Bloomberg) — SK Innovation Co. plans to get two years or more ahead of its rivals and deliver solid-state batteries by 2025, according to the head of battery research at the South Korean company, which released results Friday showing a jump in sales last quarter.

Battery sales rose 68% from a year earlier to 816.8 billion won ($698 million), the company said. It forecasts sales to climb above 3 trillion won next year and 6 trillion won in 2022, when it aims to turn to profit. The results followed an announcement the previous day that SK Innovation is teaming up with U.S.-based Solid Power Inc. to develop and produce solid-state batteries.

The batteries are a keenly anticipated development in the industry, potentially hastening EV adoption by providing automakers with a safer and cheaper alternative to lithium-ion batteries. The technology could potentially slash EV charging times to about 10 minutes from as much as several hours.

SK Innovation plans to use a nickel-cobalt-manganese cathode and anode based on silicon or graphite for its solid-state batteries by 2025 and also seeks to deliver one with a lithium-metal anode by 2030, said Seongjun Lee, head of the department overseeing battery research.

LG Energy Solution, the world’s second-largest lithium-ion battery maker, has said it aims to commercialize solid-state batteries between 2027 and 2030. Another Korean player, Samsung SDI Co., is forecast to start mass producing the batteries in 2027, according to BloombergNEF.

“We have never caused fires with our batteries and we have the world’s best technology for high-nickel batteries,” Lee said in an interview on Thursday at the company’s campus in Daejeon, to the south of Seoul.

The unit of conglomerate SK Group hasn’t laid out a schedule for its next-generation battery before. The plan comes as the company looks to increase its global presence, and after LG apologized for a $1.9 billion recall of General Motors Co. Chevrolet Bolts due to battery fires.

As part of Thursday’s agreement with Solid Power, which is backed by Ford Motor Co. and BMW AG, SK Innovation will invest $30 million for a stake in the Colorado-based company, which plans to go public via a reverse merger. Among others, BMW has joined the race with a plan to build a prototype of a solid-state battery car before 2025, while Toyota aims to commercialize EVs with the batteries by mid-to-late decade.

“Why the relationship with SK is so valuable to us is that our business model doesn’t have us being a cell producer in this automotive industry at scale,” Solid Power Chief Executive Officer Douglas Campbell said Thursday.

Solid Power has an agreement to test its cells in Ford and BMW vehicles. Campbell said in an interview last month that if manufacturing is successful, the company will deliver them in 2022, with an eye toward full battery production in 2025 and vehicle manufacturing in 2026. He said Solid Power would look to partner with an automaker or existing battery manufacturer for full production.

SK Innovation chose Solid Power as a partner because its quality of sulfide electrolyte might enable the Korean firm to switch some of its operation lines from lithium-ion batteries to solid-state, Lee said. The company aims to use 60%-70% of its production lines for solid-state batteries in the future.

SK Innovation is seeking other partners mainly in the U.S., he added.

Asked about solid-state batteries during Friday’s earnings call, SK Innovation’s head of business strategy, Jinsuk Yu, said the company is seeking various partnerships, especially to resolve problems such as dendrite. That refers to spiky structures formed by lithium ions as a battery charges. They can grow long enough to reach the other electrode and short-circuit the battery, potentially causing a fire.

“SK Group has a reputation of good investment strategy, especially in M&A,” said Hyun-Su Kim, a fund manager at Seoul-based IBK Asset Management. “If SK invests on something, you need to look at it even if the size is small.”

South Korea unveiled plans in July to invest $35 billion in its EV battery industry by the end of the decade. SK Innovation’s shares have soared 88% in the past 12 months, giving it a market value of almost $20 billion.

Despite the rising sales, SK Innovation’s battery division posted an operating loss of 98.7 billion won in the third quarter through September. Overall, though, the company’s operating profit beat analyst expectations, coming in at 618.5 billion won compared with a loss of 28.9 billion won a year earlier.

“We aim to hire more researchers for solid-state batteries,” Lee said. “We already have about 150 specialists in organic and inorganic chemistry at our refinery and petrochemical businesses. They are now helping battery projects. This campus will be getting bigger.”