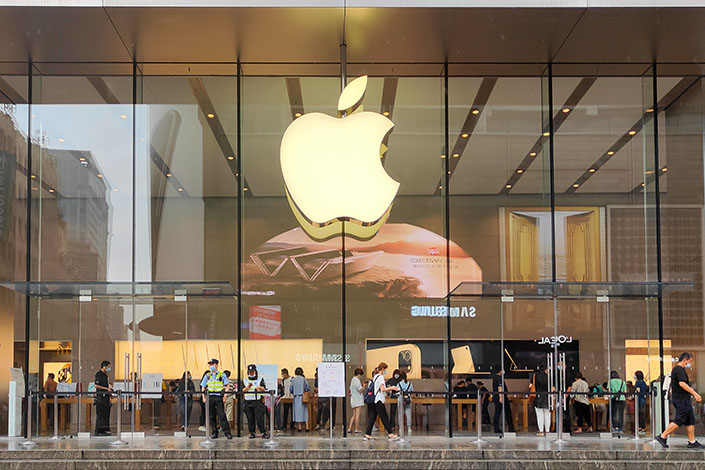 An Apple store is seen in Shanghai on July 2. Photo: VCG

(Nikkei Asia) — Apple posted record September-quarter revenue of $83.4 billion on Thursday, driven by sales of 5G iPhones, especially in the Chinese-speaking world, but would have made billions more if not for the supply chain bottlenecks plaguing the global tech sector.

The American technology giant warned of possible further headwinds in the current quarter ending December — usually its best-performing period, thanks to the holiday season.

"We estimate these constraints had around a $6 billion revenue dollar impact, driven primarily by industrywide silicon shortages and COVID-related manufacturing disruptions," he said.

"But we believe that by the time we finish the [current] quarter, that the constraints will be larger than the 6 billion that we experienced" in the September quarter, the CEO added.

Cook blamed the supply constraints largely on the industrywide chip shortages and the coronavirus-related manufacturing disruptions in Southeast Asia. The latter "improved materially across October," he said, but the chip shortages continue.

Greater China, which covers the Chinese mainland, Hong Kong and Taiwan, reported the highest revenue growth of all regions: an 83% year-on-year jump to $14.6 billion.

Apple is selling the new iPhone 13 in China at a lower price than it set for the iPhone 12 launch there last year. Asked whether this pricing strategy will be employed globally to drive up sales, Cook said decisions are made "region by region."

Global iPhone sales increased 47% to $38.9 billion. But the company also saw growth in all other product categories, with Macs and services recording all-time highs in revenue, Cook said.

The strong year-on-year growth around the world was partly due to Covid-19 lockdowns and the delay of a new iPhone launch last fall, which hit the company's revenue hard at the time.

Apple started shipping the iPhone 13 on Sept. 24, but buyers face longer-than-expected waits due to manufacturing delays from the Covid wave in Vietnam and the deployment of a new camera feature.

The iPad would be hit particularly hard by the supply issues in the current quarter, the company forecast.

"We expect revenue for each product category to grow on a year-over-year basis, except for iPad, which we expect to decline year over year" on supply constraints, Apple finance chief Luca Maestri said on the earnings call.

Cook said Apple is advocating for the CHIPS Act, which includes $52 billion for the semiconductor sector in the U.S. The act has passed the Senate as part of a larger package, but it has not yet made it through the House.