By An Limin and Bonnie Cao 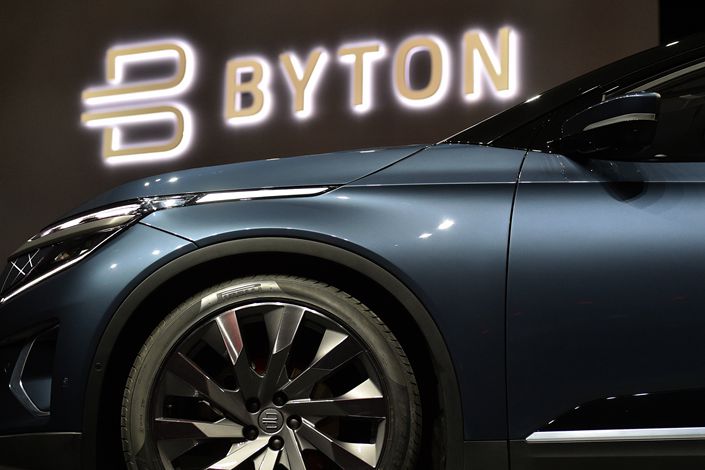 Founded in 2016 by former BMW and Nissan Motor executives, Byton is among a group of Chinese startups that rushed into the burgeoning new-energy vehicle sector

Byton suspended worker payrolls while its factories halted operations, according to a person close to the company. Byton, which unveiled its first M-Byte concept car in 2018, has yet to start commercial production that was originally scheduled for 2019. Even if the company could launch products soon, Byton cars would not be competitive with rivals under current market conditions, the person said.

Byton didn’t immediately respond to a request for comment on the bankruptcy case and its latest business problems.

In 2017, Future Mobility formally adopted the brand name Byton shortly after it secured $240 million of funding from retail giant Suning and Fullshare Holdings.

In 2018, state-owned China FAW Group led Byton’s $500 million B round financing and signed a cooperation framework to collaborate in areas such as components purchasing, platform technology and investment. In September 2018, Byton acquired an FAW unit for 850 million yuan ($133 million) to obtain an automobile manufacturing license.

Byton’s capital stress started emerging in September 2019 when it failed to complete a funding round to be led by FAW. A management overhaul and the Covid-19 pandemic further exacerbated Byton’s troubles in 2020. The company suspended all domestic operations and furloughed staff in July last year. Former CEO Daniel Kirchert left the company and joined Evergrande’s EV unit shortly afterward.

“It will probably be very difficult for Byton to revive,” said a person close to the company. Byton’s main research and development unit was abroad with high costs, which required a large amount of new investment to rekindle production.

The company applied to register a new tech company named Shengteng in September 2020. It planned to raise 2 billion yuan ($289 million) from FAW and the investment vehicle of the Nanjing city government to accelerate mass production of the M-Byte electric SUV.

A new lifeline appeared in January this year after Byton struck a strategic cooperation deal with Apple Inc. supplier Foxconn. Mass production of the M-Byte was planned for 2022.

While the survival of Byton hinges on funding from FAW, the Nanjing government or Foxconn, the three parties may have lost interest, according to people familiar with the matter. FAW is fully devoted to converting its flagship brand Red Flag to electric vehicles by 2030. Foxconn pulled out of its investment after a few months of due diligence. The Nanjing government, which once helped Byton make payrolls, has stopped providing aid for two months.

Byton also faces new rivals in the electric vehicle market as competition has intensified compared with a few years ago. Homegrown startups Nio Inc., Li Auto Inc. and Xpeng Inc. debuted on the U.S. stock market, while tech giants from Baidu Inc. to Xiaomi Inc. ploughed billions of dollars into their own electric vehicle ventures.