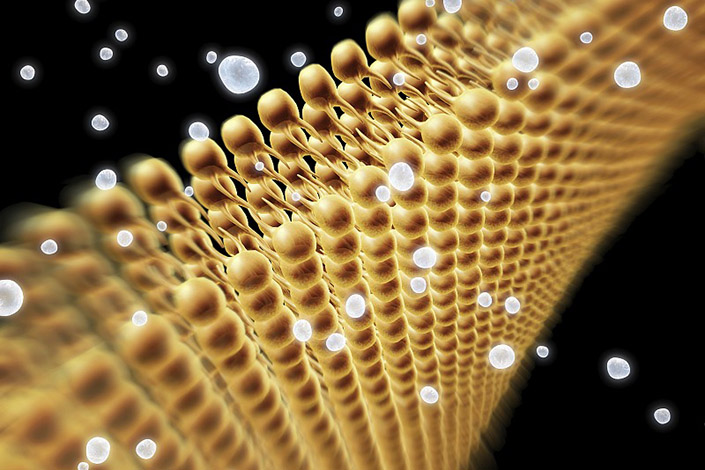 The FRI technology could also help China to achieve its green goals and curb some of the dramatic climate change impacts of the livestock industry. Photo: VCG

Researchers in China say they are pioneering a way to produce livestock fodder from exhaust gas at an industrial scale, in a move that could one day reshape commodities markets and reduce the nation’s dependency on foreign soybeans.

The process uses a special microbe to synthesize animal feed protein from simple carbon and nitrogen sources at a clip which makes it a promising alternative to natural options, according to a report from a newspaper run by China’s Ministry of Science and Technology.

The microbe is a bacterium called Clostridium autoethanogenum — and it’s typically seen in the biofuel industry where it is used to make ethanol. The research, part of a growing global body of work on industrial waste fermentation, was unveiled at a press conference Saturday by the Feed Research Institute (FRI) of the Chinese Academy of Agricultural Sciences and Beijing Shoulang Biotechnology Co. Ltd., which partnered on the project.

“The move breaks through the time and space constraints of natural protein plant synthesis, and provides a national weapon that makes up for the biggest shortcoming of Chinese agriculture — the excessive dependence for feed proteins on foreign sources,” the report in the Science and Technology Daily said.

It comes after the country’s vast imports of American soybeans became a flashpoint in the U.S.-China trade war, and as food security jitters drive growing Chinese policy support for artificial proteins like lab-grown meats.

China is the world’s largest importer of soybeans, buying about 100 million tons last year. Much of those were used to feed the nation’s livestock. About 24 million tons were sourced from the U.S., according to customs data.

The FRI technology could also help China to achieve its green goals and curb some of the dramatic climate change impacts of the livestock industry, the report said.

Xue Min of the FRI said the team’s synthesis of protein from carbon monoxide and nitrogen sources was faster and more efficient than natural processes, and resulted in material with a higher protein content, according to the report. The work has not been published in a peer-reviewed journal.

C. autoethanogenum is a type of bacteria that metabolizes carbon monoxide and carbon dioxide into acetate and protein, said Michelle Colgrave, a Professor of Food and Agriculture at Australia’s Edith Cowan University who was not connected with the project.

“If you think about a yeast used for brewing beer, those yeast can themselves be harvested from a brew tank and used as an ingredient in food,” Prof. Colgrave said. In this case, the C. autoethanogenum eat nitrogen and carbon monoxide, grow, produce acetate, and themselves become a protein-rich biomass that can be used as an animal feed input.

Using microbes to make animal feed protein from simple carbon sources is “not unique,” Prof. Colgrave said, citing work being done by the UK’s Deep Branch Technology and U.S. firm NovoNutrients. “But the use of tail gas as a feedstock or input into the protein value chain is a very interesting concept,” she said.

The use of C. autoethanogenum in such a way might be a world first, Prof. Colgrave said, but it was hard to be sure because firms working in the area tend to carefully guard their research.

“This is very exciting technology,” said Michael Boddington, managing director of Asian Agribusiness Consulting. “It's a further step in the right direction — utilizing science to produce food in a more sustainable way and helping China to feed itself.”

Boddington said it would be exciting to watch the commercialization of the technology and how the new protein form compares to current ones. “Consumers are becoming increasingly aware of the importance of sustainability and the environment and I look forward to seeing this technology become a commercial reality.”