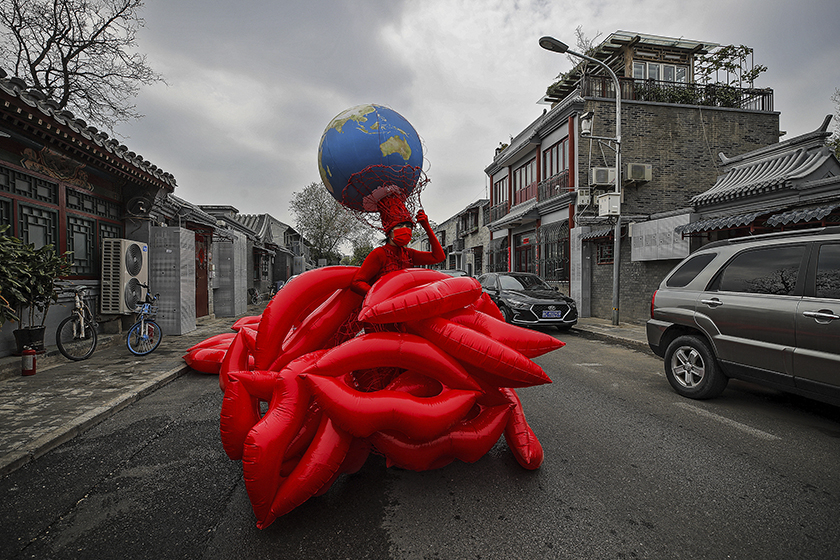 Chinese artist and environmental activist Kong Ning wearing a globe-shaped crown and 40 inflatable red lips, displays one of her works from a collection called “Kiss the earth” on April 22 in Beijing, to draw attention to environmental protection. Photo: VCG 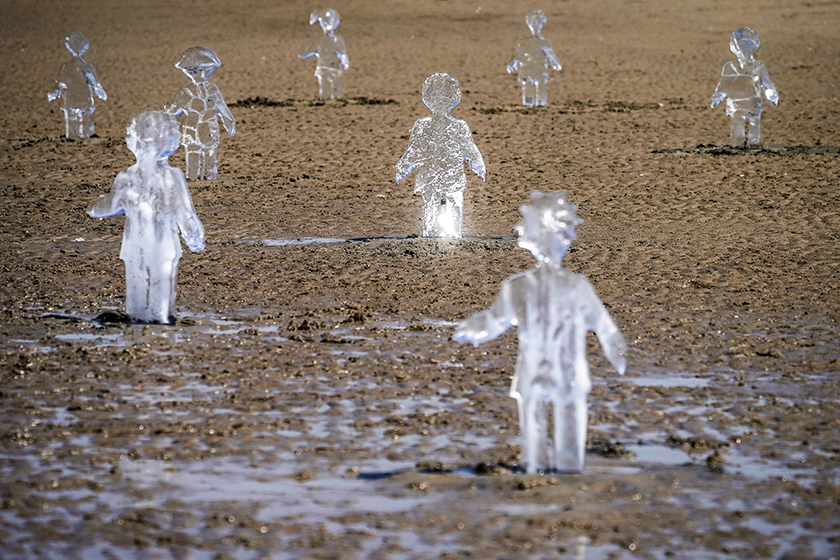 Ice statues of children are seen on May 31 on New Brighton Beach of Wirral in Merseyside, U.K., to highlight global warming issues and the COP26 conference, which started on Oct. 31 and will last 13 days. Photo: VCG 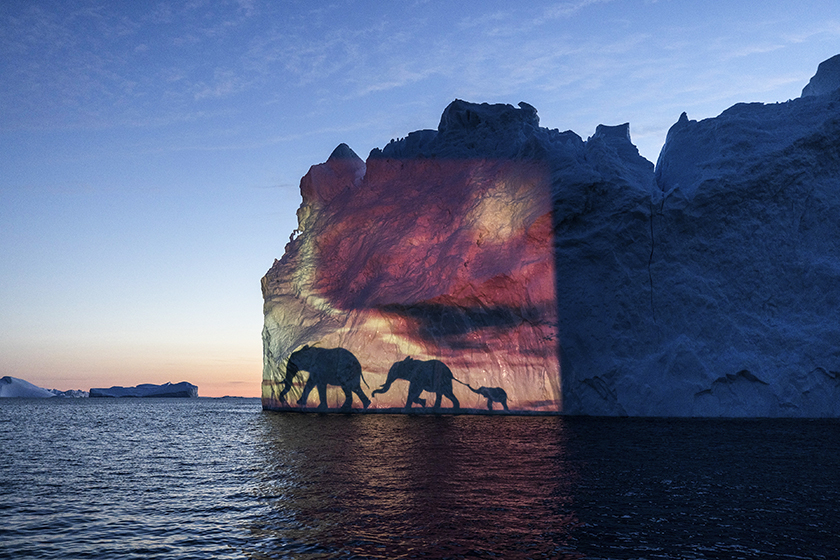 Swiss light artist Gerry Hofstetter illuminates an iceberg with an image of elephants on Oct. 12 at the West Coast of Greenland in the Arctic as part of a project the artist created for COP26. Photo: IC Photo 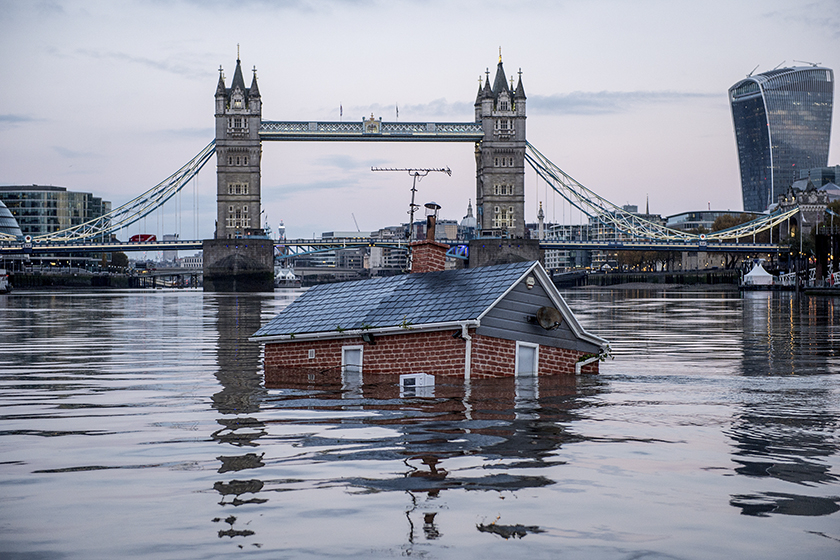 An environmental protest group put a model of a British house in the River Thames in London in an action entitled “Our house is flooding” in November 2019 to bring attention to the rising sea levels around the world. Photo: VCG 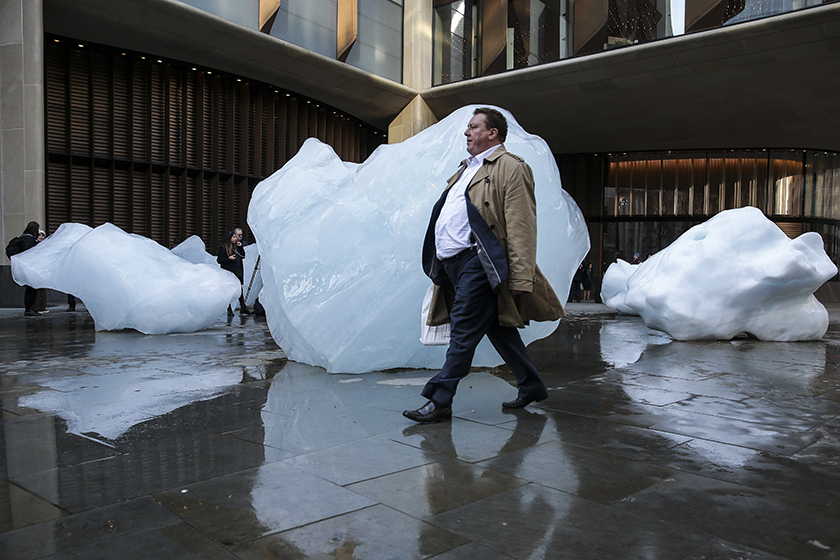 A man walks past a block of melting ice in an exhibit entitled “Ice Watch” by artist Olafur Eliasson and geologist Minik Rosing outside the Bloomberg building in London, the U.K., in December 2018. The ice used in the installation was sourced from the waters in Greenland. Photo: VCG 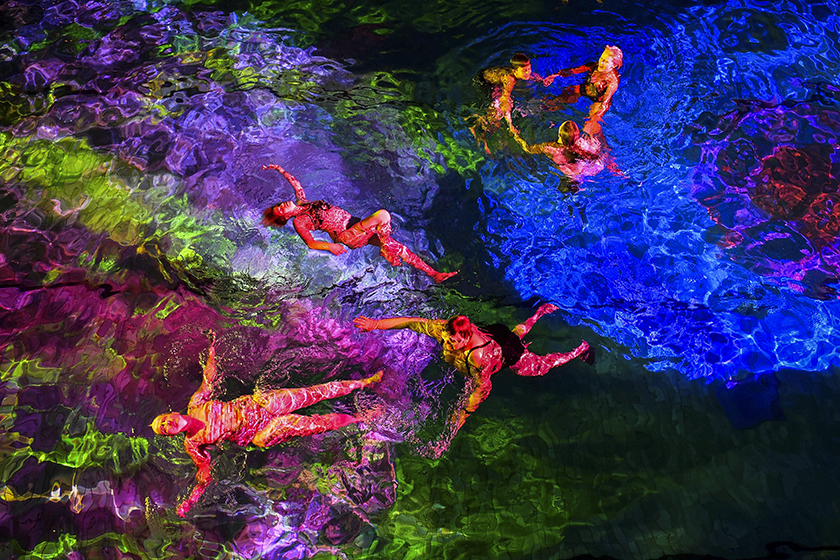 People swim in a lighted indoor swimming pool in October 2018 in Bern, Switzerland, during a performance by Swiss visual artist Pipilotti Rist and the World Wide Fund for Nature to denounce the disappearance of corals due to global warming and acidification of the ocean. Photo: VCG 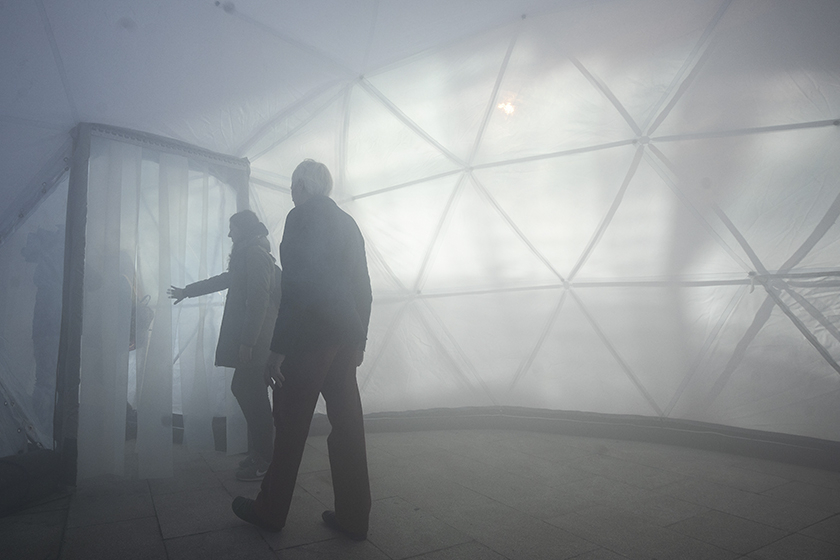 People visit the art installation “Pollution Pods” by artist Michael Pinsky during COP25 on Dec. 2 in Madrid, Spain. The pods allow visitors to be immersed in choking smog that is simulated by perfume blends and fog machines to drive people to take action on air pollution. Photo: VCG 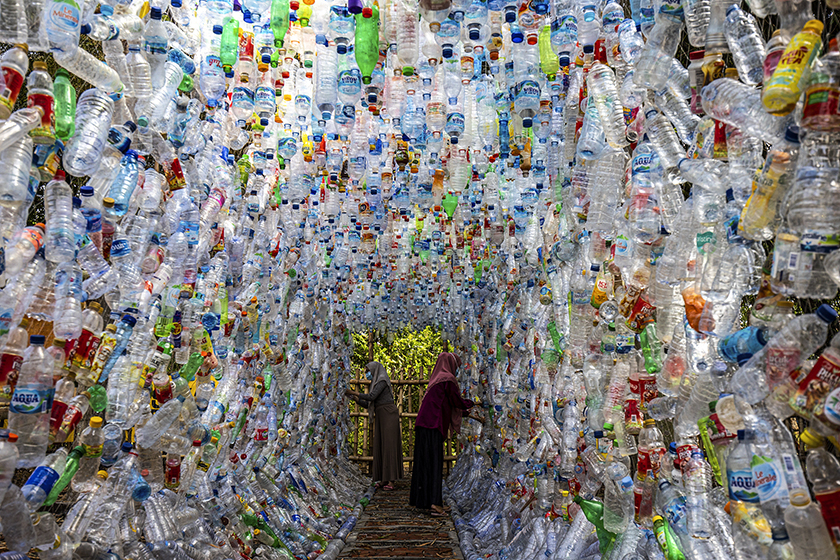 ECOTON environmental activists prepare a 12-meter long plastic bottle tunnel on Sept. 15 in Gresik, Java, Indonesia as part of a three-floor plastic waste museum the group built to remind people of the plastic waste pollution in the rivers and oceans. Photo: VCG 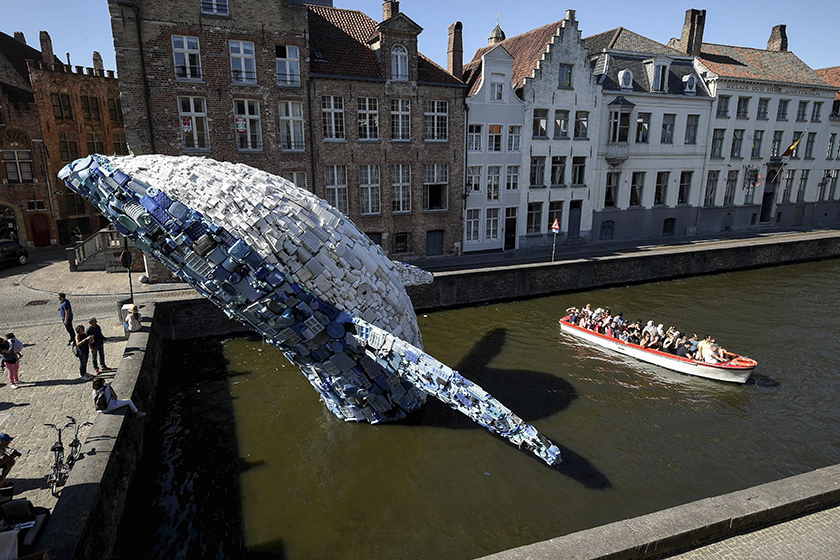 A boat of tourists sails past a 10-meter whale installation made up of five tons of plastic waste pulled out of the Pacific Ocean in July 2018 in Bruges, Belgium. Photo: VCG 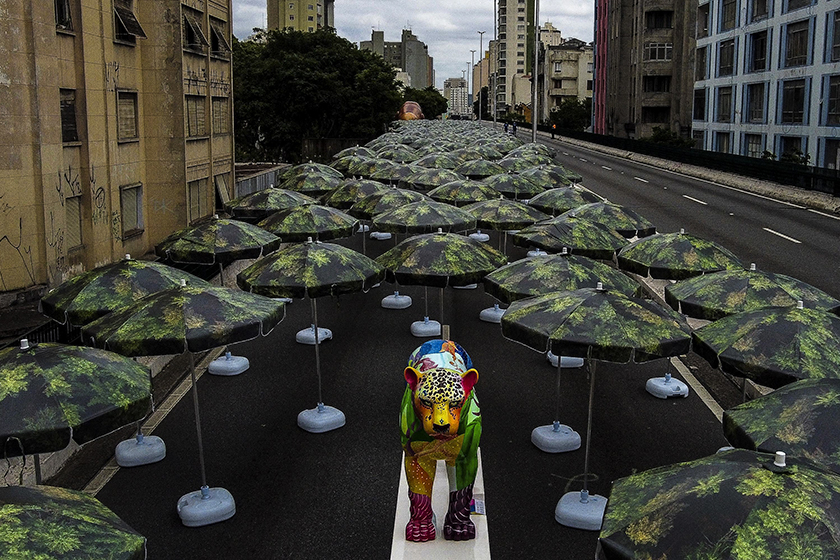 The installation “I Was a Different Jungle” by a group of artists, presented at the Virada Sustentavel Festival on an elevated highway in Sao Paulo, Brazil, in October 2020, intends to draw attention to deforestation and its impacts for the next generations with 200 patterned umbrellas and animal sculptures. Photo: VCG 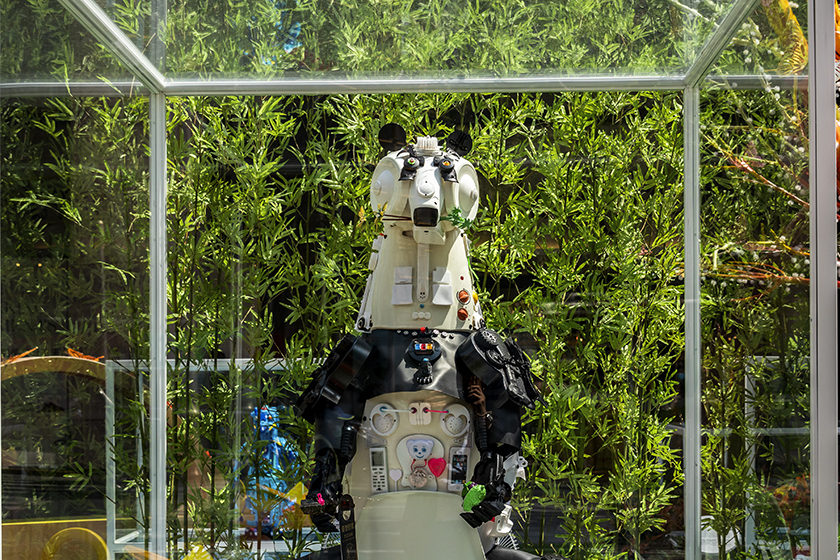 A panda statue made up of seven types of plastic waste is on display in April 2020 in Shanghai. Photo: VCG 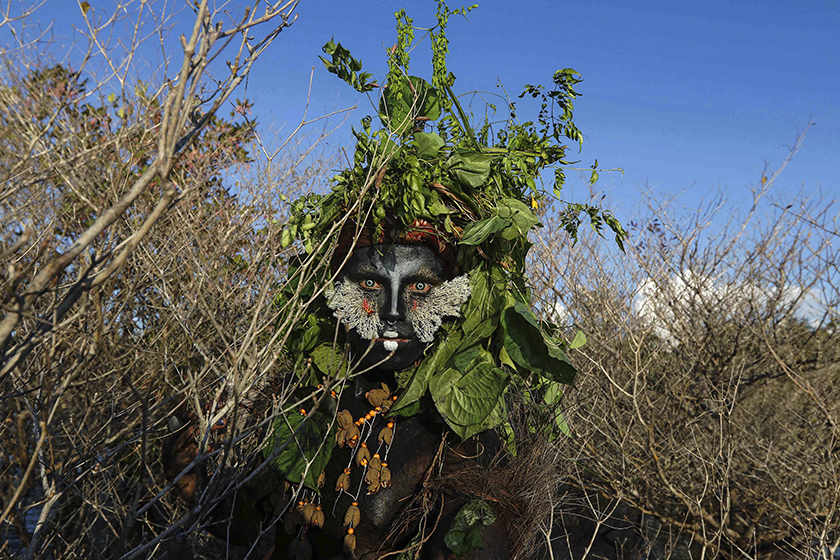 Artist and activist Emerson Munduruku pose for a photo through his drag queen alter ego character Uyra Sodoma, at the Sustainable Reserve of Anavilhanas in the state of Amazonas in Brazil, in July 2018. The artist creates his costume with natural materials and travels around to teach children about environmental protection. Photo: VCG 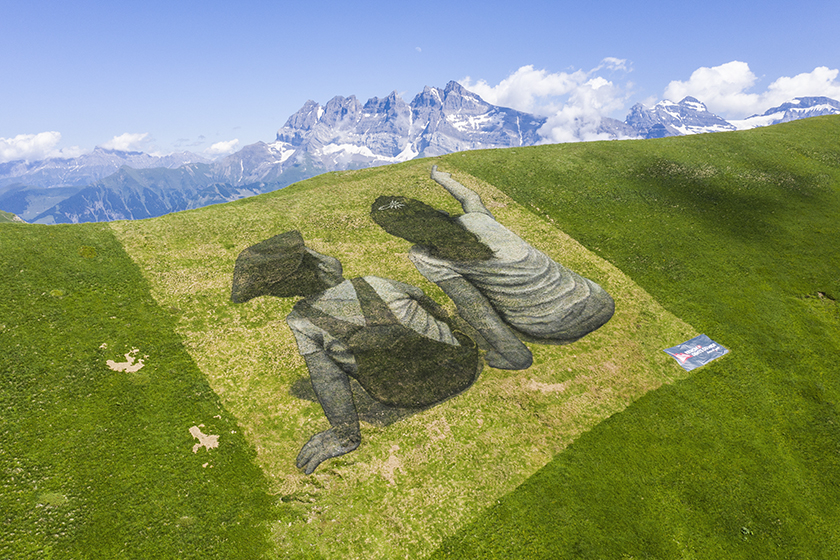 A land graffiti by artist Saype showing a boy and a girl pointing to the Dents du Midi summits is seen in July 2019 in Switzerland. The artist is known for using biodegradable materials to create large paintings on land. Photo: VCG 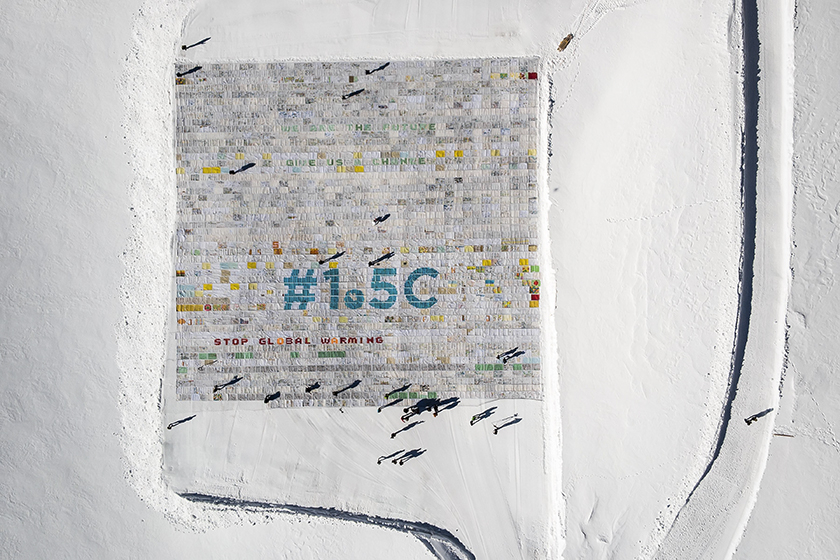 People roll out a collage of 125,000 drawings and messages measuring 2,500 square meters from children around the world about climate change in November 2018 in the Swiss Alps. The piece was displayed ahead of COP24 in Poland. Photo: VCG