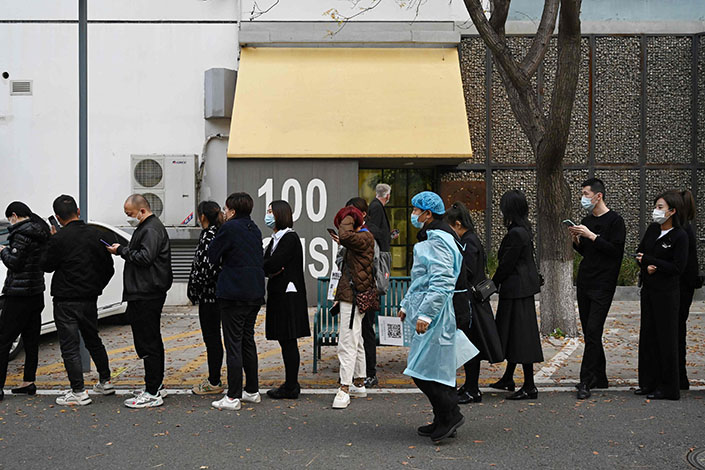 More Chinese cities have followed in Beijing’s footsteps by adopting so-called “space-time” rules to designate the close contacts of confirmed Covid-19 cases, taking up the more expansive criteria as they scramble to contain the latest outbreak which has spread to most provincial regions.

Since Wednesday, many residents in the southwestern city of Chengdu have received notifications from the local authorities saying they have been identified as being in the same “space-time company” as Covid-19 patients and might be at risk.

Broadly, “space-time company” refers to people — or more precisely their phones — being in the same place at the same time but the definition of “same place” and “same time” varies, and not every city has offered precise definitions. While regions’ previous criteria for close contact designation were also usually based on physical proximity, rules based on “space-time company” seem to be more expansive in practice.

In the northwestern city of Jiayuguan and Chengdu, it refers to people whose mobile phone has been within the same 800-meter grid square as the phone of a confirmed Covid case for over 10 minutes, and any of the two sides’ phones has been in the city for more than 30 hours in the last 14 days, according to state-run broadcaster CCTV, citing local health officials.

Meanwhile, the disease control center in Changsha, Central China’s Hunan province, said people whose phone signals have “collided” with infected patients at the same base station for a specific period of time could be recorded as “space-time company.”

Chengdu’s move came days after Beijing officials notified residents who have had a “space-time overlap” with a reported Covid case to self-isolate, follow local epidemic control measures and put off plans to return to the capital if they are elsewhere in the country.

A health official responsible for tracing close contacts in Sichuan told Caixin that sharing “space-time company” could result in people’s digital health code turning from green to yellow, which would restrict their movement for a period.

This is a new concept established for current epidemic prevention and control needs, and definition standards still need to be unified, a health official at the Chinese Center for Disease Control and Prevention told Caixin.

China reported 40 locally transmitted cases on Friday, down from 68 a day earlier, according to the National Health Commission. The country recorded a three-month high of 93 local infections on Tuesday.