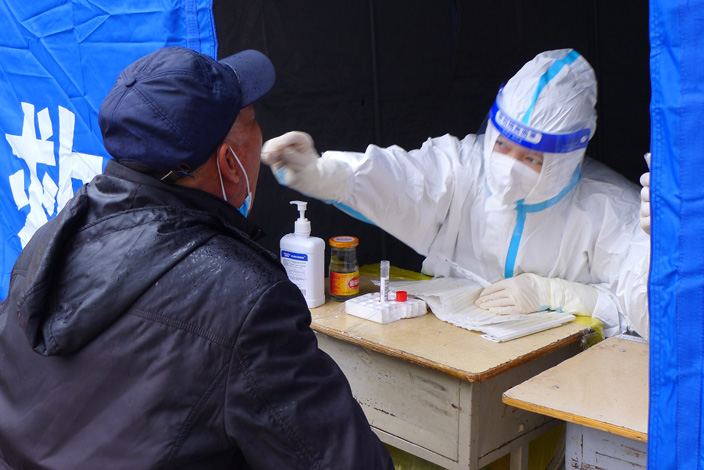 Local Covid-19 outbreaks in mainland China have spread to 19 out of 31 provincial-level regions, the widest distribution nationwide since the Wuhan outbreak early last year, as the number of infections mostly linked to trips in northern China since mid-October continues to grow.

As of Wednesday, China had recorded more than 700 locally transmitted infections in dozens of cities in 19 province-level regions since Oct. 17 when Xi’an, the capital of northwestern Shaanxi province, confirmed two cases in a group of eight who had visited Inner Mongolia and Gansu province. The widest spread prior to this began in Nanjing on July. 20 before reaching 16 provinces in a month.

The country confirmed 87 new locally transmitted cases (link in Chinese) on Wednesday, down from a three-month high of 93 a day earlier, according to the National Health Commission (NHC). About half of these cases were found in the city of Heihe in Northeast China’s Heilongjiang province, which recorded its highest daily number of local Covid cases since the city reported its first positive case on Oct. 27.

Health authorities in China have been scrambling to control the multiregion Covid outbreak as the number of local infections linked to trips in northern China continues to grow. Nearly 500 of the some 700 total confirmed cases recorded since mid-October are directly and indirectly linked to outbreaks in Inner Mongolia and Gansu, according to local health authorities.

As of Wednesday, the city of Heihe, Heilongjiang province, has recorded 184 cases in eight days since one confirmed case was found in Anhui district on Oct. 27. The city has locked down multiple communities, conducted six rounds of mass testing for the coronavirus, and since Wednesday closed all public venues.

Wu Liangyou, deputy director of the NHC’s disease prevention and control bureau, said at a press conference Saturday that the local cluster in Heihe, which neighbors Russia’s major Far Eastern city of Blagoveshchensk, was not linked to outbreaks in other regions but instead caused by new imported cases.

North China’s Hebei province, which has the second-highest daily count among provincial regions, confirmed 23 cases on Wednesday, with 20 of them found in its capital city Shijiazhuang.

The Chinese capital recorded zero new cases on Wednesday. The city confirmed 9 local cases the previous day, all in Changping district. As of Tuesday, the city has recorded 39 locally transmitted cases in three districts in its latest local outbreak.

Other cities have reported new cases linked to outbreaks in North China. The city of Chengdu in Southwest China’s Sichuan on Tuesday confirmed a locally transmitted case of a person who had travelled on business to Xi'an, Yinchuan, Lanzhou and Chongqing from Oct. 8-17.

Chongqing municipality on Tuesday confirmed four new local cases, two of which have had contact with the Chengdu case. The eastern city of Changzhou, Jiangsu province, on Tuesday reported three new cases linked to cases confirmed in Chongqing.

The country has been implementing its “zero tolerance” policy with strict disease control measures, which prominent infectious disease expert Zhong Nanshan has defended in a state media interview, saying that measures to deal with sporadic Covid-19 outbreaks are less costly than treating patients after they’ve been infected.

Zhong has said at a Saturday conference that the country could effectively contain the latest outbreak within a month.