Songyang’s Once Young: Portraits From a Forgotten Countryside 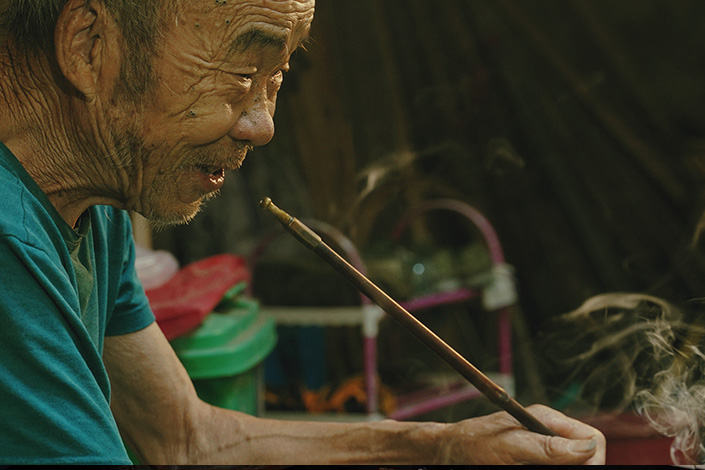 It is well known at this point that many of China’s best kept secrets lie in the countryside. Beyond the skyscrapers and metro systems of the country’s bustling urban centers exists a parallel world of farm and furrow where the tempo of life is dictated by the metronome of the seasons rather than the corporate schedule of industry.

For visitors, domestic and foreign alike, escaping China’s cities to access the rural experience has increasingly become the objective of traveling in the country, akin to journeying back in time to a version of the Middle Kingdom unchanged for millennia, whose agricultural rhythms form the primordial bedrock on which Chinese culture and society today is built.

Yet the rich historicity of China’s countryside is as much a curse as a blessing. In recent decades, perceptions of rural areas and modes of living as backward or outdated have seen swathes of people, mostly young, relocate to cities, attracted to the magnetic pull of higher wages and an urban way of life.

According to census data, China’s urban-rural population was split more or less evenly in 2010, pulling level for the first time in the country’s long history. But by 2020, around 900 million people were living in cities, with 500 million living in the countryside. This rapid transformation has many asking what might be lost if the trend continues.

Xiangjun and Zhang Zhanping are two Shanghai-based artists attempting to confront this question. Their new exhibition focuses on Songyang, a picturesque village in southeast China’s Zhejiang province that is facing a challenge to reinvent itself following the exodus of young people to nearby cities.

The pair set out to capture the essence of traditional life in Songyang through a parallel series of photographs – landscape and portrait – that depict the keepers of the village’s history and customs: its ancient buildings and elderly population. Their aim is to remind people, especially younger generations, what is at stake as the population of places like Songyang reach the end of their lives, and hopefully renew interest in these forgotten places.

The exhibition, to be held at the Sinan Mansions in Shanghai between November 5 and 19, is a compassionate portrayal of life in the village. For Xiang, the project is personal. His family hail from Songyang, and while he grew up five-hours away in Shanghai he spent much of his childhood visiting older relatives in the village.

“My parents are both in their nineties, they are from Songyang but now live in Shanghai,” he says, “Every time we go back to Songyang I know it could be their last time. I want to do this exhibition while my parents are still alive.”

It is in Shanghai that both Xiang and Zhang have forged successful careers in the city’s art scene, although lacquerware, not photography, is the medium for which they are best known.

Xiang has been working with lacquer since the 1970s. His work has won numerous awards in the years since and has appeared in the country’s top exhibitions and museums. Zhang, meanwhile, is a floral designer by trade, but is well known in the city as deputy curator of the Shanghai Yiming Lacquer Collection and one of the founders of the Shanghai Muchuanjian Lacquer Art Space. Both men felt that for the Songyang project photography was the best way to convey their artistic message and better connect with their subjects.

“We went into people’s homes and had intimate conversations with them,” Xiang explains, “It was during this process we realized that every elder’s experience is written on his or her face. The people we photograph have a sense of calm that younger people don’t. For them, the geography of Songyang is entwined with their lives – it is a feeling I don’t think exists in city life.”

They are both clearly fond of their subjects. One elderly lady they describe as having the elegance of a ballerina. Another man, they say, looks like Hemingway. It is a bold claim, but the resulting photo is proof aplenty of the uncanny resemblance. Each portrait in the series is candid and sincere, full of the tenderness and humanity usually reserved for photographs of family or friends.

Beyond their human connection to these individuals, Xiang and Zhang care deeply about the world of ideas they represent. For them, these elderly villagers are the countryside – one and the same – custodians of Songyang’s historic memory, representatives of a lost age that may soon be gone.

“Life will disappear. When the buildings collapse, they can be repaired, but when the elderly disappear they will be gone forever. This feeling is very powerful for me,” Xiang says.

To some extent, the perceptual shift these artists seek is already underway. Cultural movements to reject the modern rat race have sparked discussion on Chinese social media in recent years, while the stardom of rural vloggers like Li Ziqi has helped more of China’s young to see the countryside as a viable place to live.

With their exhibition, Songyang’s Once Young, Xiang and Zhang tap into this complex discourse of culture and loss in relation to China’s villages, but they insist they do so without any preconceptions.

“We don’t want this to be a judgment or evaluation of the social phenomenon. We’re not trying to present the lives of these people as difficult compared to life in the city.”

“We hope that through this exhibition, the younger generation can see life in ancient villages from another angle,” Xiang continues, “we don’t want to discuss whether it’s good or bad. We want to let the audience think and feel for themselves.”

Laurence Coulton, writer for WildChina, is a British photographer and writer with a focus on East Asian culture and society.