By Zeng Jia and Bonnie Cao 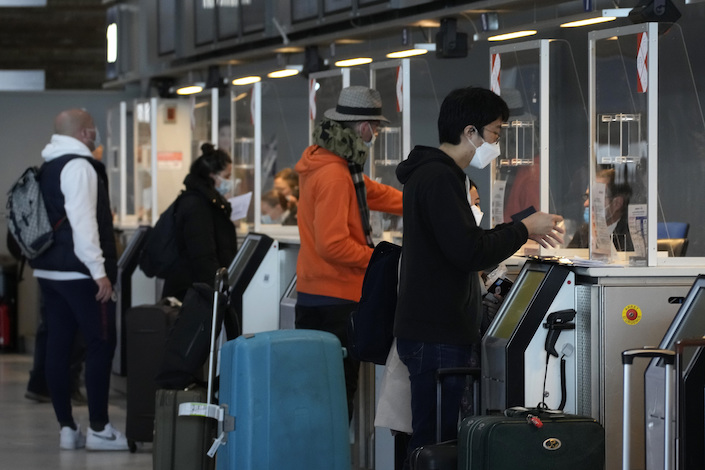 The United States reopened its border to international travelers on Nov. 8 after barring them for nearly two years

The U.S. embassy and consulates in China resumed regular visa services as the country reopened its border to international travelers after barring them for nearly two years under Covid-19 restrictions.

Vaccinated international travelers are allowed to travel to the U.S. with a negative Covid-19 test taken within 72 hours before their flights, said David Meale, chargé d’affaires of the U.S. embassy in Beijing, at a press conference Tuesday. Proof of vaccinations authorized by the World Health Organization, including the ones produced by Sinopharm and Sinovac, are accepted, according to Meale.

Unvaccinated travelers can also apply for U.S. visas, though they will need to show a negative Covid-19 test within the previous 24 hours upon boarding, said Consul General Sharon Ann Weber. All travelers are not required to quarantine upon arrival in the U.S. as long as they test Covid-19 negative, Weber said.

Amid the Covid-19 pandemic, the U.S. embassy and consulates in China canceled the vast majority of in-person appointments for immigrant and nonimmigrant visa processing more than 18 months ago. In May, visa appointments for Chinese students planning to study at American universities were resumed after the U.S. lifted travel restrictions for students from China and several other countries.

Resuming international travel to the United States bolsters people-to-people ties between the U.S. and China, Meale said, while there’s “a sense of optimism that the two countries are resuming multi-level exchanges.” Meale cited recent phone calls between American and Chinese leaders and communications on climate change.

Meale said he hopes China visas for U.S. citizens could be normalized “sooner than later” because “Americans are very interested in traveling to China.” He said his two sons would like to visit China by next summer.

Asked to comment on the rising cases of repatriation of Chinese students, Meale said the U.S. promotes “legitimate student travel,” but not all visa applications will be approved after adjudication.

The U.S. is the top destination for Chinese students to study abroad. About 370,000 Chinese students are studying in the U.S., accounting for one-third of international students there. More than 90,000 student visas have been issued in China since May last year, according to Weber, who acknowledged that the number during a similar period before the pandemic was “far more,” without giving a total.

In August, nearly 30 Chinese students and visiting fellows to the U.S. encountered difficulties entering the country, with many reporting rough handling during interrogation and search, according to statistics from China’s Foreign Ministry.

China urges the U.S. to stop such practices and provide necessary conditions for people-to-people and cultural exchanges between the two countries as well as education cooperation, Foreign Ministry spokesman Wang Wenbin said Nov. 3 at a press conference.

The U.S. has no updates on this policy, Meale said.