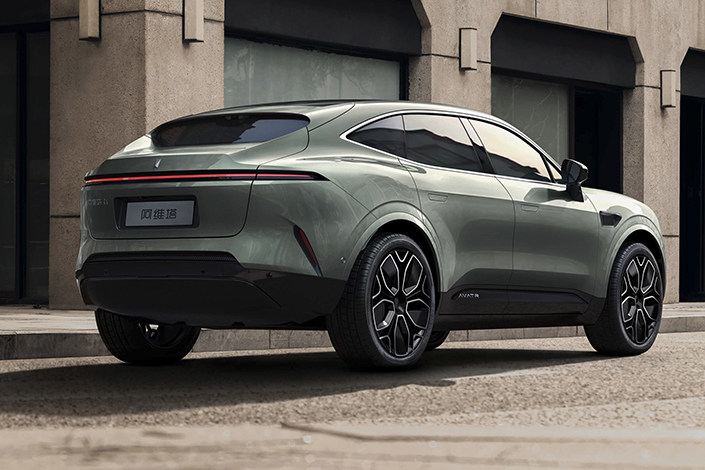 The Avatr 11 SUV is scheduled to start deliveries in the third quarter of 2022, Avatr Technology (Chongqing) Co. Ltd. said on Monday. Chongqing Changan is the unit’s biggest shareholder with a nearly 40% stake.

The SUV, created in collaboration with Huawei Technologies and battery giant CATL, will carry the “HI” logo. That stands for “Huawei Inside” — the tech company’s smart car platform, which includes driving software as well as gadgets used for navigation.

The announcement comes at a time when Huawei is seeking new revenue sources under the weight of U.S. sanctions that have battered its formerly core smartphone business.

Also on Monday, Avatr Technology announced plans to launch four more models in the next five years, which will be built on new platforms it will develop with Huawei and CATL. It did not provide any further details.

On Nov. 5, Avatr Technology raised 2.42 billion yuan ($378 million) in a strategic funding round joined by several investors including CATL, the first financing effort since its establishment in 2018 as a joint venture with New York-listed electric vehicle startup Nio Inc.

In May, the company’s name was changed from Changan Nio to Avatr Technology, with 95.38% owned by Chongqing Changan and 4.62% held by Nio.

The Nov. 5 fundraising made CATL the second-largest shareholder in the company with a 23.99% stake, according to an exchange filing (link in Chinese).

During a group interview on Monday, Avatr Technology CEO Tan Benhong said that the Avatr 11 will be equipped with CATL’s latest electrification technology, but remained silent on rumors that the car will use the company’s cell to chassis (CTC) technology, touted as being able to reduce battery weight while increasing vehicle’s driving range to over 1,000 kilometers.

Responding to concerns that letting third-party firms to provide key components will weaken Avatr’s ability to build its own core competencies, Tan said that manufacturers have slim chances of success without the support of competent suppliers, especially at a time when the industry is accelerating its pivot toward electrification and intelligentization.

Last week, CATL announced plans to participate in Shanghai-based electric carmaker Hozon Auto’s series D2 funding round, in an investment seen by industry analysts as part of the battery-maker’s effort to incorporate its technologies into Hozon’s future cars.

Driven by fears of being outshone in smart electric vehicle manufacturing by startups like Nio and Xpeng Inc. and tech giants such as Xiaomi Corp. and Baidu Inc., a growing number of traditional Chinese automakers have scrambled to launch their own new-energy vehicle sub-brands in a bid to survive the race, including Dongfeng Motor Group Co. Ltd. and GAC.

Level 3 refers to features that enable a car to drive itself only under certain circumstances and require a human driver to be ready to take control in the event of an emergency, according to U.S. engineering standards group SAE International, which classifies autonomous driving from Level 0 to Level 5.