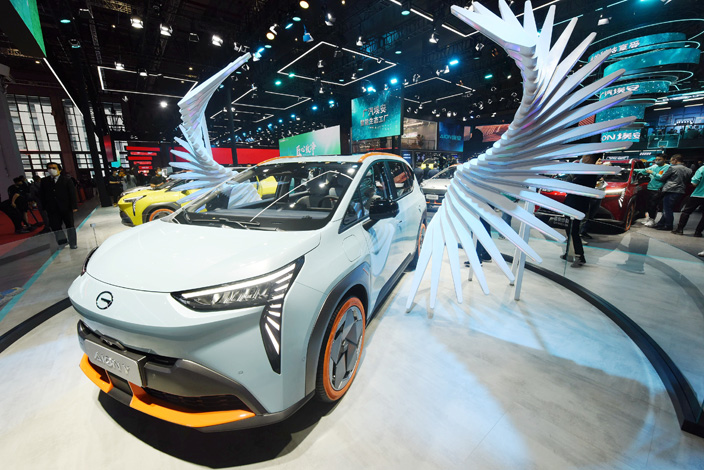 A new-energy vehicle developed by GAC Aion sits on display at an auto show in Shanghai on April 19. Photo: VCG

The carmaker, a unit of the state-owned Guangzhou Automobile Group Co. Ltd. (GAC), said the move will “accelerate the industrialization” of its battery technologies through tests on the manufacturing process, product consistency and costs, as well as help prepare for future mass production, according to a Friday exchange filing by GAC.

The investment could be seen as a renewed effort by GAC to diversify its sources of the core electric vehicle component amid surging demand in the world’s largest auto market.

When contacted by Caixin on Saturday, a GAC Aion representative said that the planned production line will not be used for mass production, but mainly to verify the technology’s capabilities. It did not provide specifics.

Friday’s announcement could be seen as part of a strategy GAC unveiled at GAC Tech Day in April, when the automaker said that it will focus on accelerating the scaled-up application of its in-house batteries with sponge-like silicon cathodes and fast-charging technologies.

According to Mei Ao, head of the battery division at the GAC Research Institute, its silicon cathode batteries are able to provide a higher energy density than many other batteries of the same size or weight. This means that the battery can power a car for longer on a single charge. Mei also said that the company has also developed a technology that makes silicon negative plates as soft as a sponge, thus protecting the battery’s structural integrity from potential damage during charging and discharging.

Besides the silicon cathode batteries, GAC Aion has also developed a fast-charging battery technology through Guangzhou Juwan Technology Research Co. Ltd., a one-year-old startup incubated from GAC. Juwan General Manager Pei Feng said this technology can provide an 80% charge for car with a battery range of 500 kilometers in 10 to 20 minutes.

The Aion V70 SUV equipped with the fast-charging technology hit the market on Sept. 30, while the silicon cathode battery-powered Aion LX SUV, which has a cruising range of 1,000 kilometers on a single charge, will go on sale by the end of this year, according to GAC.

In recent years, GAC Aion, whose car sales grew 124% year-on-year to 13,586 units in September, has been trying to gain wider access to batteries.

In July 2018, GAC Aion and its parent announced their partnership with Tesla battery supplier Contemporary Amperex Technology Co. Ltd. to establish two battery joint ventures with plans to build a plant in Guangzhou.

In the first nine months of 2021, sales of new-energy vehicles in China — including electric, plug-in hybrid and fuel-cell vehicles — hit 2.2 million units, representing a year-on-year increase of 190%, according to statistics from the China Association of Automobile Manufacturers.