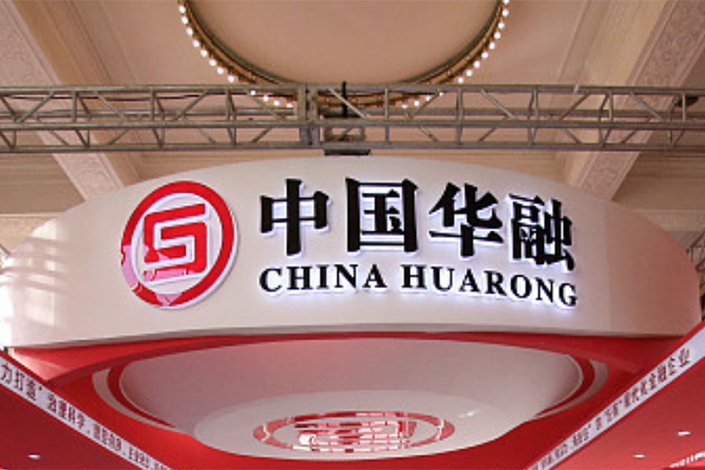 The logo of China Huarong Asset Management at an exhibition in Beijing in 2018. Photo: VCG

China Huarong Asset Management Co. Ltd. has won regulatory approval to sell bonds to raise as much as 70 billion yuan ($10.95 billion), three months after a government-backed rescue plan was secured to salvage the debt-ridden distressed-asset manager.

The proceeds must be used mainly for its main business such as the acquisition and disposal of nonperforming assets and debt-to-equity swaps, the China Banking and Insurance Regulatory Commission said (link in Chinese) on its website on Tuesday. The announcement, which was dated Nov. 11, said Huarong should strictly abide by the regulations for issuing financial bonds and disclosing information and provide a written report about the issuance to the commission within a month of its completion.

The fundraising plan marks the latest step in Huarong’s restructuring and rehabilitation after it was led to the brink of collapse by its corrupt former Chairman Lai Xiaomin, who embarked on an aggressive, debt-driven expansion that burdened the company with hundreds of billions of yuan of debt. Lai, who was arrested in 2018, was executed in January this year for crimes including taking 1.79 billion yuan of bribes.

The bond sale was approved by Huarong’s shareholders in October, part of a package of measures to raise capital and sell assets to pay down debt and strengthen the company’s balance sheet. Strategic investors brought in as part of the rescue plan, which is being spearheaded by state-owned heavyweight Citic Group Corp., are also expected to inject cash into the stricken conglomerate.

Although shareholders and the regulator have approved the bond sale plan, Huarong may have to work hard to get investors interested.

“To restore market confidence, a normal bond issuance in the primary market is one of the most important means,” Financial Regulation & Law, a Hangzhou-based think tank, wrote in an analysis published Tuesday on its social media account. “However, considering the current transactions and quotations of Huarong bonds in the secondary market, a market-oriented issuance will be difficult.”

Huarong had previously been able to sell bonds with a coupon of as low as 3.35%, and the highest coupon over the past few years has been 5.66%. But its bonds trading in the secondary market are now yielding around 10%, as investors view the bonds as higher risk. It also means that if Huarong wants to issue bonds, it would have to pay at least that rate of interest, which would be unappealing for the company because it’s so high.

Huarong is unlikely to be prepared to pay a coupon rate of 10%, the think tank said. “Therefore, how to get the capital market to reevaluate Huarong’s bonds in the primary market will be a test for the current Huarong management.”

Some other bad-asset management companies have also run into financing problems in the wake of the crisis at Huarong, and the yields on their bonds in the secondary market have risen significantly, according to Financial Regulation & Law. As one of the most important bad-debt managers, Huarong’s ability to pull off a bond sale will be an important signal for the industry as a whole, it said.

Huarong was established in 1999 as one of the nation’s “Big Four” state-owned distressed-debt management companies to dispose of the massive volumes of nonperforming assets held by China’s big state banks.

Huarong has been in turmoil since Lai’s downfall and is now in the process of unwinding the excesses of his decade-long tenure which saw the company expand aggressively into a range of financial services spanning securities, trusts, banking and financial leasing through opaque deals with affiliated companies, and invested in projects that later turned sour, including a South Korean tourism project on Jeju Island.

In September, Huarong put billions of yuan of bad assets, including mining and exploration rights, real estate assets, land rights and projects under construction, up for sale. The bad-debt manager is also raising capital by offloading the stakes in subsidiaries outside of its core distressed-asset disposal business. In October, shareholders voted in favor of the company selling a 72% stake in its securities subsidiary.

But Huarong still has a mountain to climb to restore its finances and secure the support of its strategic investors. Its statement in August unveiling the rescue plan showed that it has signed only non-binding investment framework agreements with Citic Group and four other state-owned or state-backed companies: China Insurance Investment Co. Ltd., China Life Asset Management Co. Ltd., China Cinda Asset Management Co. Ltd., and Sino-Ocean Capital Holding Ltd. The five companies intend to make strategic investments in Huarong by subscribing to new shares.

The company has released no further information about the progress of the plan and its shares remain suspended in Hong Kong.