By Yue Yue and Zhang Yukun 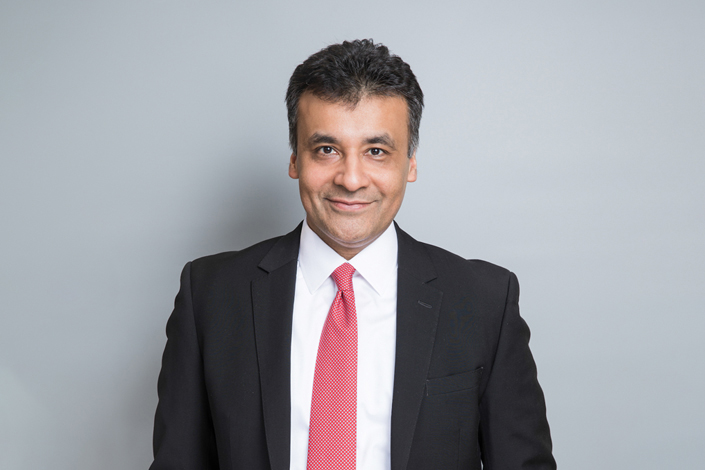 Established in 1969 as the international arm of Boston-based Fidelity Investments, Fidelity International became an independent company in 1980, and is now owned mainly by management and members of the original founding family. As of the end of 2020, it had more than $700 billion in assets under management worldwide.

Rajeev joined Fidelity International in 2019 and is in charge of its overall strategy in the region. Previously, Rajeev was the Asia Pacific CEO of U.S. asset manager PineBridge Investments LLC, where he worked for 27 years.

Caixin: How is the preparation of the wholly owned mutual fund company going in China? When will it open? Have the private fund products been liquidated to avoid conflicts of interest?

Rajeev: We submitted the mutual fund business application early in 2020, and got our approval in August this year. Our teams are working to ensure that we are ready for regulators’ onsite inspection. We are hopeful that we’re going to get into business some time in 2022, and hopefully then launch our first fund as well.

As for private funds, we became the first foreign asset manager to independently receive the private fund management qualification in 2017. And it was a key milestone for us. The first stage in running the private fund business was to have a better understanding of the Chinese market, build an onshore IT network, and realize our local commitment and strategy. As a result, our operation of the private fund business aided in the establishment of a team and a system, as well as maintaining engagement with the real market, partnerships and distribution channels.

When foreign asset managers enter China, they usually start a joint venture first, which then becomes a wholly owned company. Why didn’t Fidelity adopt such a strategy?

Every firm has a different strategy. It was our strategic decision to build an independent business in China, as it can ensure we bring global best practices to the market and deliver the same standard of services to Chinese investors as we do in every other market in the world.

We set up our first China office in 2004. When the opportunity came about, we set up a wholly owned technology operation center in Dalian in 2007 to provide technology solutions for the Asia-Pacific business, and we now have over 1,300 people there. Then we waited very patiently for the opening up of the market where foreign players would be allowed entry. When that time came, we applied for the private fund management qualification and then for the wholly owned mutual fund license.

The Chinese mutual fund market has grown significantly in the last two years. There are 150 players in the market, and the issue of product and strategy homogeneity is a major concern. How does Fidelity compete with local players? What is the primary strategic plan?

There are some fantastic asset management companies already in China, so we know there is a lot of competition from very large local champions, joint ventures, and those like us who are new to the marketplace. But we’ve been investing in China for a long time, and we have a long history of over 50 years as an investment organization. We also have a global-local mindset, bringing the good from the global, but understanding what’s required locally as well.

What do we stand for? First, we are an active asset manager. We’ve been doing this for a long time in that space, and we build our investment teams with a lot of patience and a lot of time. Second, I believe we’re going to see more and more of a need for long-term investments focused around sustainability, and we have over 27 people in our team that are dedicated to sustainable investing. This is sitting outside of our analysts and portfolio managers, and most of them are in Asia. We already have two sustainable investing professionals in the asset management company that will be operating in China. So I do think the ESG (environmental, social and governance) aspect of how we invest is going to be different. The third is retirement investment, and I think we’re seeing an evolution of that area within China. We are looking forward to the opening up of the potential markets.

Unlike overseas markets, the exploration of pension investment by Chinese mutual fund companies has just started. The current market sentiment is not optimistic, and the enthusiasm of investors is not high. What do you think about the future of China’s pension investment market?

It is very clear that people are saving a lot less than they should, and they’re probably saving a lot later in life for retirement. So we need to increase the awareness of a lot of these people around why they should start investing early and why they need to invest a lot more than they are doing today. In addition to that, we need to increase the knowledge around questions like: What does this mean for me, how much do I need to save, when do I need to save, and how do I start early. After that, there needs to be solutions surrounding the products.

So I do think this is a journey. I think there’s recognition from policymakers that something needs to be done in this respect, and we are already beginning to see the development of retirement programs. Clearly, we need to ensure people have the right incentives in place, such as tax incentives, so that individuals can see the benefit of investing early and getting the cumulative compound impact over time, which will be important when they retire.

Cost competition in the fund industry has become increasingly fierce. Some analysts believe that as foreign asset managers enter the Chinese market, their fees will fall further, whether it is for actively managed products or passively managed ones. How do you forecast the trend? What will Fidelity do?

There’s clearly the pressure globally in terms of how much investors want to pay at the end of the day. I don’t have a magic answer for this, but at the end of the day, I do think technology is helping. The world is shifting, and the use of technology is becoming a lot more ingrained in businesses. And we have to do the same. We have to make sure we are able to deliver solutions in the most efficient manner.

Technology is no longer just an IT team sitting on the side. It’s part of the business. China is a great example for us to learn from. I’m excited about learning from the speed at which things get done in China, not only the speed of execution and delivery, but also how the online channels work.

For many years, Chinese mutual fund companies have relied heavily on bank distribution channels. What is the distribution strategy for Fidelity funds in China?

The distribution is crucial. We want to work with banks and with securities companies. But what is also becoming really important is online channels like Ant Group and Tencent. So for retail investors, the focus will be the traditional channels and online channel. And then, as we build a track record, we obviously want to work and will work with institutional investors as well, whether it’s insurance companies, pension funds, or even banks in that context as they look for mandate. We’ve already built a small team to understand the market of the online channels for mutual fund sales in China, and we still have a long way to go.

Recently, China’s over-regulation of certain industries as well as the impact of events such as Evergrande’s debt crisis have made foreign institutions’ investment prospects in China more divergent. What view does Fidelity hold?

In China, it’s really important to understand where policymaking is going, because that gives you some direction as to how you invest, where you invest, and when you invest. I think there might be short-term volatility, but I do believe in the long-term opportunities in investing in the China market. I think China is still underinvested globally, whether it’s the equity market or the bond market.