By Huang Rong and Kelsey Cheng 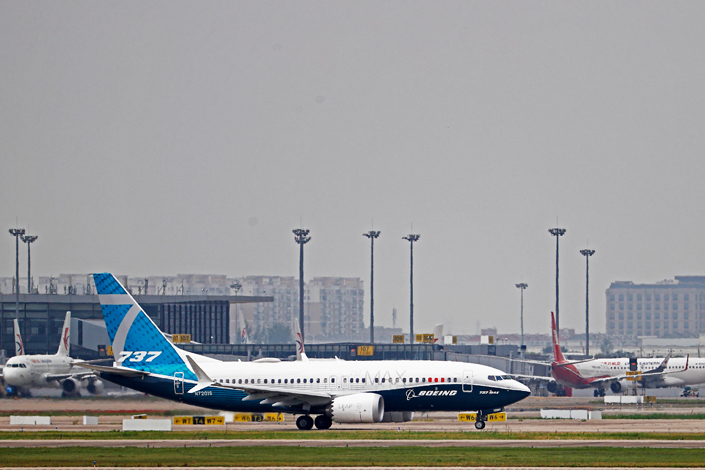 In another step toward the Boeing 737 Max’s return to China’s skies, the aviation regulator has expressed satisfaction with the company’s proposed design changes for the model, which was grounded after two fatal crashes occurred within a few months.

The corrective measures to the aircraft’s flight control system software and display system will be able to resolve the safety issues that led to the crashes, according to a notice (link in Chinese) published by the airworthiness certification department of the Civil Aviation Administration (CAA).

The regulator is requesting comments from airlines on the modifications until Nov. 26. Industry consensus is that the process of China recertifying the 737 Max is at its final stages.

According to Boeing CEO Dave Calhoun on an earnings call on Oct. 27, the plane completed a flight test in China in the third quarter. “We continue to work toward approval by the end of the year, with a resumption of deliveries to follow in the first quarter of next year,” he said.

The fatal crashes in Indonesia in October 2018 and Ethiopia in March 2019 killed a total of 346 people and led to a halt in the operation of the 737 Max in China, the first country to issue the grounding.

U.S. congressional investigators concluded in September last year that failures by Boeing engineers, deception by the company and significant errors in government oversight led to the crashes.

Two months later, the U.S. Federal Aviation Administration gave approval for the plane to resume passenger services following an extensive package of fixes. More than 175 countries have so far lifted their grounding orders, according to Calhoun.

The CAA, however, has maintained a cautious approach. In order to resume operations, Boeing had to meet three main criteria: Changes in design aimed at fixing the plane’s problems need to be approved by China; pilots need to be retrained to fly the jetliners following those changes; and the conclusions of the Ethiopian and Indonesian crash reports need to be clear.

China has the largest 737 Max fleet after the U.S., with 97 of the planes in operation before the suspension.