By Yang Min and Cai Xuejiao 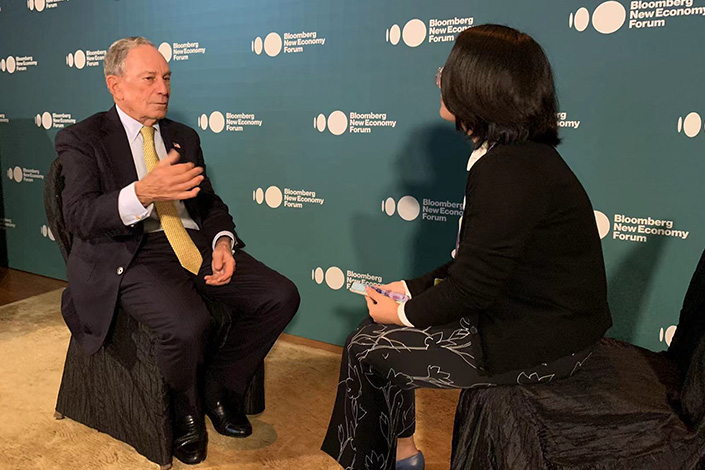 The Xi-Biden virtual summit shows that bilateral relations are progressing “in the right direction” but an in-person meeting would be better to “work out more problems,” Michael Bloomberg told Caixin in a Singapore forum.

The former mayor of New York City and founder of Bloomberg News noted in an interview with Caixin at the Bloomberg New Economy Forum that the Tuesday virtual summit between the two leaders was “a step in the right direction.”

Noting that the two countries are superpowers with “not just military powers, economic powers,” he said that the countries “have the people, resources and expertise,” and “if they don't work together, we’re in big trouble.”

“I was pleased to see the presidents get together virtually,” he said, “it would have been better if they went off to some cabin in the woods for a week and tried to work out more problems.”

As the two countries cooperate more on climate issues with a joint statement issued on cutting methane emissions during the COP26 climate summit, Bloomberg also noted the role the private sector plays in tackling issues like climate change, contributing more than governments in some cases.

“We’ve closed over half — 60% — of the coal-fired power plants in the United States in the last half-dozen years, all done by the private sector,” he said. He noted that the private sector, rather than government, has the “expertise to execute.”

Earlier this year, China has pledged to stop building new coal-fired power projects abroad and to reduce coal consumption over the decade.

Bloomberg said that the leaders’ meeting helps “set the tone and make cooperation, collaboration and conversation acceptable” which give staff on both sides “the credibility, the incentive, to go and have the real work done.”

During the meeting, which the state-run Xinhua News Agency described as a “candid, in-depth and extensive strategic” exchange on issues of mutual interests, Xi has said that climate change could become a new highlight of China-U.S. cooperation. The Chinese leader also called on the U.S. to take concrete actions to avoid a “new Cold War.”

Bloomberg said he does not see “any reason” for a “new Cold War,” noting areas of cooperation for the two countries, including trade, climate change, space, vaccines and treating diseases. There are “very few things” that the countries can do on their own, he said.

Taking his six-year-old granddaughter who is learning Mandarin as an example, Bloomberg said that the two languages are essential, as China and the U.S. “are growing and increasing their capabilities and are bigger parts of the future going forward.”