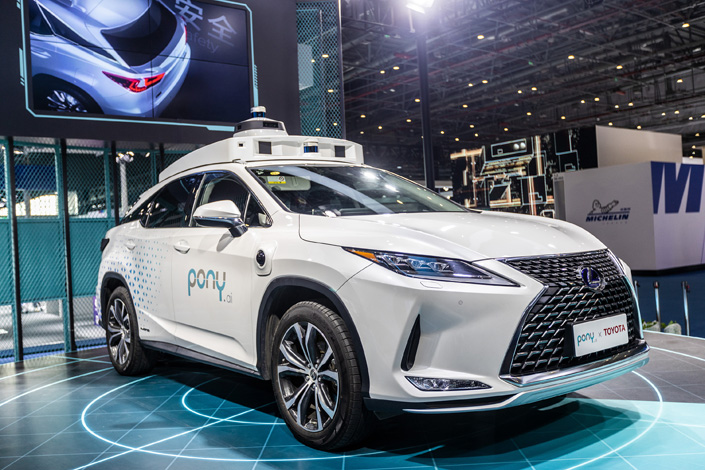 Venture capital firm Endeavor Catalyst and Endeavor Harvest Fund also participated in the round, Ozow said in a Wednesday statement, which did not disclose its latest valuation.

The new investment will give Tencent a stake in Cape Town-based Ozow, which is seeking acquisition opportunities as it seeks to expand into other parts of Africa with new products.

Founded in 2014, Ozow operates a digital payment gateway that enables merchants and consumers to link their bank accounts for online and offline shopping. The firm said that it is now processing more than $100 million in transaction volumes every month.

Pony.ai on Wednesday denied rumors that it has plans to manufacture vehicles, saying that it will remain focused on the development and commercialization of its autonomous driving systems, which the startup wants to be installed in passenger and commercial cars.

The Toyota-backed firm, which is piloting its robotaxi services in China and the U.S., said that it will increase investment in developing self-driving technology for trucks, signaling its interest in autonomous trucking. In May, five-year-old Pony.ai obtained a license to conduct commercial autonomous freight operations in Guangzhou’s Nansha district.

Baidu’s robotaxis will be available in 100 cities by 2030, says CEO

So far, the service has been available in limited areas of five Chinese cities including Beijing, Shanghai, Guangzhou, Changsha and Cangzhou, allowing passengers to hail autonomous cabs equipped with a safety driver via an app. Li said in the internal letter that the service provided 115,000 rides in the third quarter of this year.

Baidu’s 2030 plan is considered the most aggressive autonomous driving push among Chinese companies engaged in smart car services. The company aims to start mass production of its first electric cars powered by its in-house self-driving technology in 2023.

Guangzhou-based startup WeRide on Thursday announced a deal (link in Chinese) which will bring taxis powered by its self-driving technology onto Guangzhou Automobile Group Co. Ltd. (GAC)’s ride-hailing platform Ontime by 2022, cementing its efforts to make money off the technology.

Nissan-backed WeRide, which has been testing robotaxis in Guangzhou since November 2019, said that it has incorporated its latest sensor system into a fleet of GAC’s Aion S electric sedans, which have started testing for future operations on the Ontime platform.

Thursday’s announcement came two months after WeRide signed a three-way deal with a carmaker and a courier to mass-produce an autonomous cargo van designed for urban logistics, stressing its role as a supplier of autonomous driving software and hardware solutions.

Trunk, a Beijing-based startup that focuses on developing autonomous driving technology for trucks, on Wednesday said that it has raised hundreds of millions of yuan in a new funding round co-led by Yuexiu Industrial Fund, ZWC Partners and Bohai Zhongsheng.

The fresh capital will be used for developing and mass-producing its new-generation autonomous trucks and expanding the adoption of such vehicles in logistics and at ports, it said in a statement (link in Chinese).

Founded in 2017, Truck is developing Level 4 self-driving technology which enables a vehicle to drive itself under most circumstances with no human intervention.

Lidar is a key component of a driverless car’s sensor system thanks to its ability to detect obstacles using spinning lasers.

The $70 million investment is part of Hesai’s series D funding round initially announced in June when Xiaomi was seen on the list of leading investors. After the new cash injection from Xiaomi which has jumped on the smart-car making bandwagon, the round has raised more than $370 million, Hesai said in a statement.

Seven-year-old Hesai said that it will use the proceeds for the mass production of a hybrid solid-state lidar, the construction of a smart manufacturing facility and the development of automotive-grade lidar chips.

ByteDance-owned short video app TikTok retained its position as the world’s most downloaded non-game app in October with more than 57 million installs globally, compared with nearly 66 million installs in the same month of last year, according to research firm SensorTower.

The Chinese mainland, where the app is called Douyin, accounted for 17% of the new downloads, becoming the app’s biggest download contributor for the month, ahead of the U.S. with 11%, SensorTower said.

Despite maintaining the download crown, the October figure indicates that TikTok has become less attractive to new users globally as it faces a backlash in some of its overseas markets due to security and privacy concerns.

Chinese e-commerce giant JD.com Inc. posted a 25% jump in third-quarterly revenue on the back of strong performance in its retail and logistics businesses, according to its unaudited quality earnings report published on Thursday.

In the three months through September, the company’s revenue rose to 218.7 billion yuan ($33.9 billion) from 174.2 billion yuan a year ago, according to the report.

Despite strong revenue growth, JD.com reported a net loss attributable to ordinary shareholders of 2.8 billion yuan, compared with a net profit of 7.6 billion in the same period of last year. The U-turn came as the company increased spending on order fulfillment, marketing and administration that grew 23.2%, 42.3% and 91.1% year-on-year respectively to 14.3 billion yuan, 7.8 billion yuan and 3.1 billion yuan. Spending on research and development was more or less flat from a year ago at 4 billion yuan.

The company said that it finished the quarter with 552.2 million active customers, up 25% year-on-year.

Chinese social media giant Weibo Corp. has won approval to go public on the Hong Kong Stock Exchange, according to a post-hearing information pack filed on Thursday, joining the ranks of Chinese companies that are seeking dual listings in China and the U.S. amid mounting economic and tech tensions between the world’s two largest economies.

The Nasdaq-listed company did not disclose how much it aims to raise, but said that the fresh capital will be used for expanding its user base, boosting R&D capabilities and funding potential acquisitions and investments.