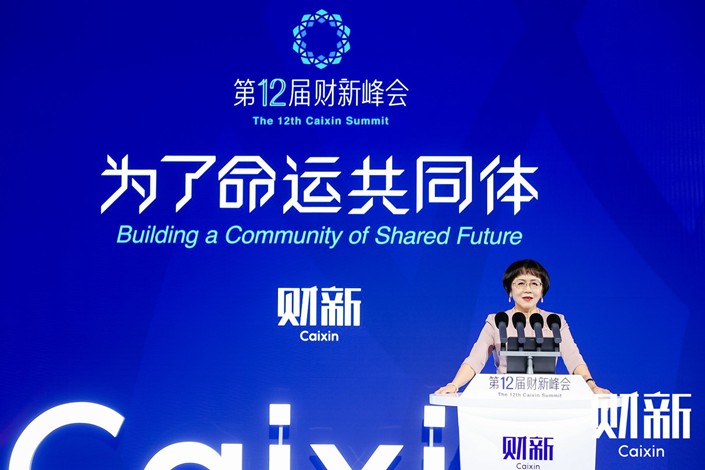 Caixin Media Publisher Hu Shuli delivers an opening speech at the 12th Caixin Summit, which was held in both Beijing and Singapore from Nov. 12 to Nov. 13. Photo: Caixin

Caixin Summit 2021, which ran from Nov. 12 to Nov. 13, brought in current and retired regulators to share their authoritative insights on the prevailing trends affecting the economy, finance, tech and trade in China.

The asset management industry should align itself with the top two national priorities of common prosperity and decarbonization, Wang said at the Caixin Summit.

Green bonds are the main channel for the industry to support decarbonization, Wang argued. The volume of green bonds will reflect China’s green transition efforts. Green bonds are also a safe investment option for ordinary citizens.

Regarding the recent trends in green bonds, Wang noted:

• Localities in Guangdong and Jiangxi provinces are testing out local government green bonds.

• Innovative products such as carbon neutrality bonds and sustainable development bonds are emerging.

• The credit ratings of green bonds are higher than those of other bonds.

• The capital raised does end up in green and sustainable projects.

• The Federal Reserve is transitioning to average inflation targeting, but the time frame has not been formally defined, creating confusion in the market.

• Both the EU and U.S. central banks have focused on keeping employment high as opposed to keeping inflation low.

• The Federal Reserve seems to believe that inflation is only short-term, but not everyone agrees.

The short-term investment model that existed in the asset management industry does not contribute much to high-quality development in China, Liu said. The industry should transition to long-term value investing, for example, by:

• increasing direct financing, which would more effectively transform growth from upgrading the economy into household wealth

• implementing the principles of environmental and corporate social responsibility

China must demonstrate its commitment to further opening up and earn more trust in the international community by improving laws and regulations, Chen Deming argued. Rules must be specific and clear. If not, they risk being changed overnight and implementation could be inconsistent nationwide. The key challenge is finding the right balance that suits China’s socialist characteristics, global economic trends and promoting effective reform in multilateral institutions.

China must actively support ongoing discussions at the WTO, but since there isn’t much progress expected for the foreseeable future, regional cooperation should be a priority. Regarding recent developments in free trade agreements, Chen observed the following:

• While the tariff concessions in the Regional Comprehensive Economic Partnership, or RCEP, are not as extensive as those in the Comprehensive and Progressive Trans-Pacific Partnership (CPTPP), they are already close to 90%. The clauses for state-owned enterprises (SOEs) and labor conditions are comparatively easier for developing countries to accept. We should be wary of the long tariff transition period (in some cases 16 and 21 years) as it creates uncertainties and the possibility of geopolitical intervention during implementation.

• The China-EU Comprehensive Agreement on Investment (CAI) has been agreed to, but the EU’s parliament has held off ratification this year. Moreover, China’s implementation of the CAI will require significant changes to law and policy.

Shang cited the latest New Kinetic Energy Index of China released by the National Bureau of Statistics to show the momentum of the new economy. He further pointed out several aspects concerning China’s new economy worth focusing on in the future:

• Common prosperity: To promote prosperity for all Chinese, there will be a great amount of demand in areas such as addressing the urban-rural regional imbalance and providing equal basic public health services. And the supply side will also be improved along with the expansion of middle-income groups and the addition of more high-quality workers.

• Innovation: Empowered by technological innovation, strategic new industries like smart manufacturing will develop rapidly. And the pace of the digital transformation in conventional sectors will also accelerate.

Shang called for more efforts to strengthen top-level design and policy coordination at the macro level, especially for financial policies.

Regarding the development of the new economy, he also underlined the need for better coordination of government action and market efficiency. To balance the two amid uncertainty stemming from the pandemic, he advised the Chinese government take a trial-and-error approach. He also believes that the government-leading posture might be fine-tuned in the post-pandemic era.

The local government failures behind China’s regional power outages signal that we are not yet fully prepared in the run-up to the 2035/2050 modernization goals and the 2030/2060 carbon goals. Being mentally, institutionally, and technologically prepared as well as policy-prepared, is essential for dealing with the new risks and challenges that come with advancing modernization and achieving peak carbon emissions.

• Policymakers should make it clear that peak carbon does not mean peak energy or peak power. Lower energy consumption does not necessarily lead to lower emissions. We should realize that we can peak our carbon emissions while our energy or power consumption remains high.

• They should also be prepared for the fact that China’s residential energy consumption will continue to grow. China hasn’t peaked urbanization yet, and the quality of that urbanization needs to be improved too.

• Green finance and monetary policy tools should support the flexible transformation of coal power. This will actually indirectly support the establishment of more wind and solar power generation by solving the intermittency and instability issues of renewable energy to ensure reliable capacity and flexible service.

• It’s necessary to speed up the flexible transformation of coal power, converting it from the country’s main source of electricity to a backup source for supplementing the grid when renewables sources are unstable. Coal power could remain China’s main source of power for a period of time.

China still lacks the core technologies needed to develop the industrial internet, as seen in its technological gaps for high-end chips and basic software, as well as its shortage of high-end talent. More incentives must be created to promote the development of the industrial Internet by:

• Encouraging market entities to participate in research and development

• Promoting the construction of new infrastructure

The Chinese government’s principle on regulation, the Inclusive Prudential Supervision Mechanism, has not changed, according to Wang. He believes that regulators must have an inclusive attitude toward rapidly developing technologies, while prudently supervising them to protect the interests of consumers and promote market competition. At current stage, as tech giants have significantly increased their market shares and as their operations have impacted the interests of consumers, stricter regulation is needed to minimize the crowding-out of competitors and stimulate innovation to the greatest extent possible.

Li Yizhong, former head of the Ministry of Industry and Information Technology

In his keynote speech at the Caixin Summit, Li Yizhong pointed out the significance of integrating the digital and real economies, and recommended paths and key tasks.

In the Chinese context, the digital economy mainly consists of two aspects, which are digital industrialization and industry digitalization.

• Industry digitalization: This is short for the digitalization of various industries. It refers to using digital tools to transform and enhance the efficiency and effectiveness of various vertical industries in the primary, secondary and tertiary sectors of the economy. This is the ultimate aim of the digital economy.

According to Li, developing the digital economy has been included in the top-level plan, with the following key performance indicator:

• This a new indicator, and its appearance shows that digital industrialization has become measurable and comparable.

• Li said that using a share percentage was better than the total amount because it is more accurate, as it avoids the blindness brought by inflated valuations.

Talking about the path for integrating the digital and real economies, Li shared four aspects:

• The integration of information talent and industrial talent, in which specialized workers collaborate with synergy.

• The integration of platforms with their customers to enhance their ability to provide services.

• Double down on investment in integrated circuits and digital infrastructure

• Adapt measures tailored to specific sectors, locations and even companies

The digital economy should be judged based on its contribution to productivity, argued Liu Shijin. Emphasis on the real economy grew because of problems in the virtual economy, but the latter should not be viewed entirely in a negative light.

In terms of productivity, it is worth digitalizing the real economy. The process integrates digital and green technologies with the real economy, creating employment and optimizing supply chains — significantly increasing productivity. The next focus of digitalization should be on:

• services for producers, to continue upgrading the manufacturing sector

• production and manufacturing (currently, it’s focused on consumption and distribution)

• artificial intelligence, which will be the “equipment” for producing more valuable data

• adjusting the relationship between government, companies and the market