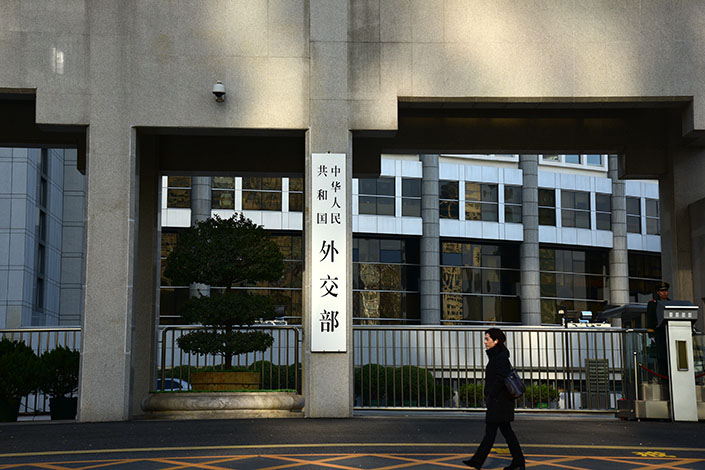 A pedestrian passes by the headquarters of China’s Foreign Ministry in Beijing in November 2018. Photo: IC Photo

Chinese experts have warned that China could completely sever diplomatic ties with Lithuania if the European country continues to “act arbitrarily” on the Taiwan issue.

On Sunday, the foreign ministry announced that China has downgraded its diplomatic ties with the Baltic nation of 2.8 million people to the “chargé d’affaires level” after “the political foundation for an ambassadorial-level diplomatic relationship has been damaged by Lithuania.”

The move was in response to Lithuania allowing the Taiwan authorities to set up a representative office using the island’s name, which opened Thursday. Such offices usually use the name Taipei.

Beijing recalled its ambassador to Vilnius in August, shortly after the office’s name was revealed.

Ties have been worsening since Lithuania in May quit the “17+1” group, which China initiated after the 2012 eurozone crisis to promote cooperation and investment with European countries. The country announced its withdrawal was for “practical purposes,” and called on other EU countries to follow suit.

“The Chinese government has, out of goodwill to preserve China-Lithuania ties, repeatedly warned Lithuania against acting in bad faith. Regrettably, Lithuania has chosen to ignore China’s solemn position and to disregard the broader interests of bilateral ties and the basic norms governing international relations,” the ministry’s statement said.

The ministry said Lithuania’s decision on the representative office “creates the false impression of ‘one China, one Taiwan’ in the world” and sets “an egregious precedent.”

Lithuania’s foreign ministry on Sunday said it regrets China’s decision to change the level of the diplomatic relations and asserted its rights to expand cooperation with Taiwan, according to a statement.

The opening of the representative office in Vilnius is based on “economic interests,” the statement said.

Ruan Zongze, executive vice president of the China Institute of International Studies (CIIS), wrote in a commentary published by state-run tabloid Global Times that the downgrading sends a message to the world not to challenge China’s bottom line on the Taiwan issue.

Ruan, a former senior diplomat stationed in the U.K. and later in the U.S., said “chargé d’affaires” is the lowest rank of diplomatic representative. The downgrading represents a serious setback in ties, he said, adding that if Lithuania continues to “act arbitrarily,” the possibility of a complete end to diplomatic ties cannot be ruled out.

The direct consequence of the downgrading is the diplomats of both countries no longer have the level of authority enjoyed by ambassadors, and their rights and scope of activities are limited, Cui Hongjian, director of the CIIS’s Department of European Studies, was quoted by Shanghai-based media outlet The Paper as saying.

This is the second time that the People’s Republic of China has reduced bilateral diplomatic relations to such a low level. In 1981, ties with the Netherlands were set to the same level after the country approved the sale of a submarine to Taiwan. The two countries resumed full diplomatic ties three years later after the Netherlands promised not to approve further arms sales to the island.

He said China didn’t take further steps this time as the government is worried about an “excessive” impact on broader China-Europe relations and that Lithuania’s stance on China-related issues could become more “outrageous” if diplomatic ties are cut.

On Tuesday, Zhang Ming, China’s ambassador to the EU, told a press conference that “some people in Europe seem to underestimate Chinese people’s aspiration for the complete reunification of our country.”