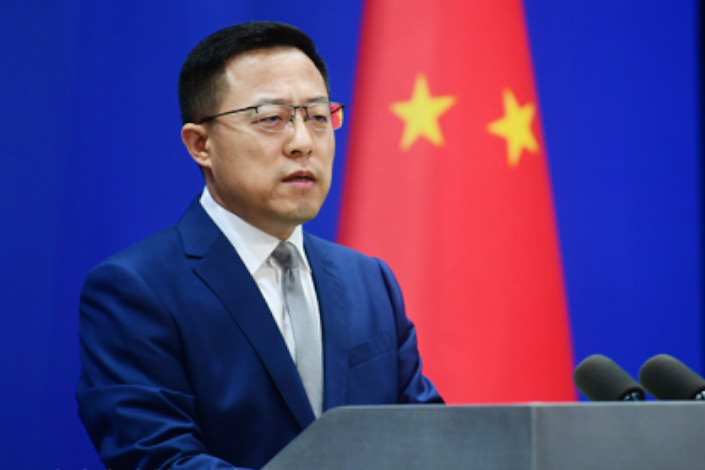 The news came a day after Chinese President Xi Jinping and his U.S. counterpart President Joe Biden held a phone conversation in which they expressed their hopes to promote cooperation, manage competition and prevent “unintended conflict” between the two countries.

“China has lodged a solemn representation with the U.S. side with regard to the above-mentioned issue reported by the media,” Chinese foreign ministry spokesman Zhao Lijian said during a regular press briefing on Monday.

The U.S. “should abide by the ‘One China’ principle” and “stop all forms of official exchanges or elevating substantive relations with Taiwan,” Zhao said, including not renaming the Taipei Economic and Cultural Representative Office in the U.S. as the “Taiwan Representative Office.”

The spokesman also urged the U.S. to “handle the Taiwan question in a prudent manner, lest it should seriously undermine China-U.S. relations and peace and stability across the Taiwan Strait.”

Zhu Fenglian, a spokeswoman for the Taiwan Affairs Office of the State Council, China’s cabinet, also weighed into the matter on Monday.

“We firmly oppose any form of official ties or establishment of official institutions between the Taiwan region and countries that have diplomatic relations with China,” she said, according to the state-run Xinhua News Agency.

In late July, China laid out detailed ground rules for engagement with the Biden administration on bilateral issues, grouping them under the “three bottom lines” and “two lists” of demands. They included the U.S. using caution on matters related to Taiwan.

Commenting on the reported Taiwan Washington office renaming, the state-run China media outlet Global Times said in an editorial on Sunday that, if the change was made, the “Chinese mainland's fighter jets should fly over the island of Taiwan and place its airspace in the patrol area of the PLA.”

The editorial added “the name change provides the Chinese mainland with sufficient reason to strengthen our sovereign claim over the island of Taiwan.”

Though the phone conversation between Xi and Biden on Friday was regarded as a sign of willingness by both leaders to pull their countries’ relations back on track, the bilateral tensions remain high.

The Biden administration is also considering launching an investigation into Chinese subsidies under the U.S. trade law’s Section 301, an outcome that could lead to new tariffs on Chinese imports, U.S. media reported on Saturday.

And on Sunday, the U.S. Department of Defense released photos of a Chinese navy task force that sailed in international waters near the coast of the Aleutian Islands in Alaska in late August. The photos were withdrawn on Monday.

The U.S. Navy also intensified surveillance of Chinese submarines in the South China Sea in the first half of the year, according to a report published by a Beijing-based Chinese think tank in July.