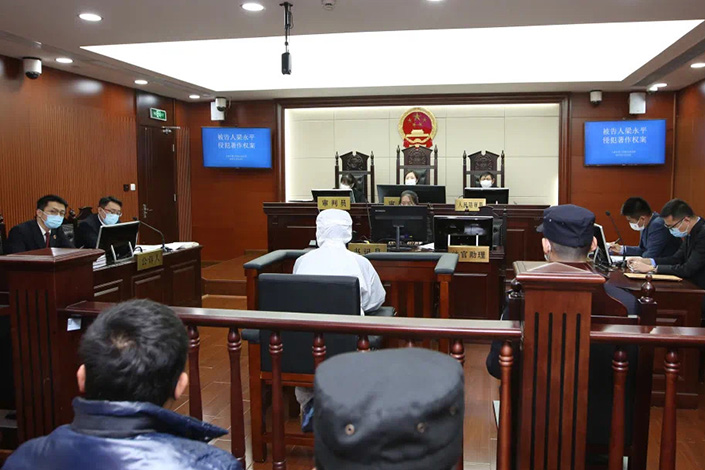 The founder of China’s largest subtitling site Renren Yingshi has been sentenced to three and a half years in prison after being found to have pirated more than 30,000 Chinese and foreign TV shows and movies, a court in Shanghai ruled Monday.

Liang Yongping was also fined 1.5 million yuan ($234,915) for the copyright infringement (link in Chinese), according to a statement published by the Shanghai No.3 Intermediate People’s Court, which made the ruling after hearing his case.

The court ordered all illegal gains be confiscated and related personal property seized, the statement said.

In January, Liang was detained by the Shanghai police at his home. In early February, authorities announced at a press conference that 14 people working with Renren Yingshi, also known as YYeTs.com, had been arrested on suspicion of copyright infringement.

“Renren can never be resumed or restarted as we can’t fix the copyright problem,” said a post published on its official Weibo account Monday. It did not cite any company executive.

Renren said “it’s unfortunate that development and maintenance personnel have been implicated.”

As of Tuesday afternoon, Renren’s website was still available, though no link was provided to download videos.

According to the Monday statement, Liang set up two companies since 2018, hiring several technical and operational personnel to develop the website and mobile apps of Renren.

Some workers organized others to download film and television works from overseas sites without authorization and then translate, re-package and upload them onto the website and apps, where customers can view and download them, said the statement.

Renren’s website and apps hosted a total of 32,824 TV shows and movies without authorization, with paying members reaching 6.8 million, the statement said. Through this business, Renren illegally earned more than 12 million yuan since 2018, the statement added.

Founded in 2003, Renren grew into one of the most influential subtitle providers for foreign-language content. Authorities said it has more than 8 million registered users around the world.

In 2014, its website was temporarily shut down after the Motion Picture Association of America blacklisted Renren as one of the worst sources of online piracy in the world.

Chinese authorities have stepped up their crackdown on intellectual property (IP) infringement in recent years. During China-U.S. trade talks in 2019, China said it would raise the penalties for violations of IP rights, and it was aiming to reduce frequent IP violations by 2022.

The U.S. pressed China on IP protection in 2014 under the Obama administration as the trade of IP rights was deemed imbalanced between the superpowers.