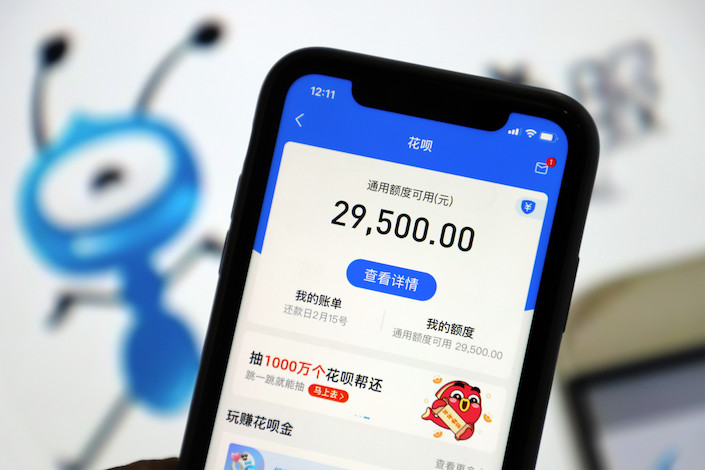 Huabei contributed 4 billion yuan of revenue to Ant Group in 2020.

The reshuffle is part of a broader overhaul that Jack Ma-owned Ant Group has undertaken to comply with tightened regulatory requirements for fintech platforms since authorities abruptly halted the company’s $34.5 billion share sale plan a year ago.

A key focus in the overhaul was Ant Group’s colossal consumer-lending business through its signature loan products, which generated the majority of the company’s income. Through Huabei and Jiebei, Ant issued 1.7 trillion yuan ($266 billion) of micro consumer loans to 500 million people as of last June. Huabei contributed 4 billion yuan of revenue to Ant Group in 2020, according to a report by Zhongtai Securities Co.

Previously, Ant Group would connect Huabei and Jiebei users with banks that provided the credit while taking a cut of the fees. This model raised concerns about the potential risks posed to the financial system as banks were left to shoulder most of the credit risk and some of them didn’t carry out their risk control responsibilities, according to regulators.

In a February notice, the China Banking and Insurance Regulatory Commission set an overall limit on online loans issued by banks in cooperation with third parties as a percentage of their total credit and stipulated limits on their total exposure to joint lending. It also mandated that in any joint loan, the banks’ partners must put up at least 30% of the capital.

Top financial regulators told Ant to focus on being a payment services provider by removing financial products from its platform and delinking them from Alipay’s payment infrastructure. They also banned Ant from allowing other financial institutions to issue loans through Jiebei and Huabei.

Huabei, which means “just spend,” functions like a virtual credit card that people can use to make purchases online and in stores. Jiebei, which means “just borrow,” provides unsecured loans for up to 12 months that are typically repaid in installments. Jiebei is designed for larger consumption transactions by users who either have already developed a credit history on Ant’s platform or are eligible for Huabei, according to Ant’s initial public offering prospectus.

Ant’s newly established consumer finance unit, Chongqing Ant Consumer Finance Co. Ltd., will continue providing consumer credit services under the Huabei brand, but consumer loans issued by its partners will be provided under a new category called Xinyonggou (信用购), according to people familiar with the matter.

Earlier this month, Ant said it was dropping the Jiebei brand from lending services provided by partners on its platform to differentiate them from its own financial services. The loans issued by partners will use the Xinyongdai (信用贷) brand, while those issued by Ant will remain under its Jiebei brand.

After the reshuffle, credit products displayed in users’ Alipay accounts will have five categories: petty cash, Huabei, Xinyonggou, Jiebei and Xinyongdai. The petty cash is usually a 500 yuan interest-free loan that borrowers have to repay in seven days.

Some Huabei users said they found their borrowing limits decreased by a few thousand yuan. One user said his quota was slashed to 1,000 yuan from 38,000 yuan, Caixin learned. But some Huabei users with excellent credit history said their quotas didn’t change.

At present, Chongqing Ant Consumer Finance can provide limited funds itself, the person said. Before the reshuffle, it considered several options. One was to lower existing Huabei users’ borrowing quotas while providing Xinyonggou accounts to them, the person said.

Huabei currently has about 500 million users with fixed consumption scenarios, which are considered the best quality of credit assets, the person said. Ant Group might risk losing some users by lowering their limits, the person predicted.

Another option was to provide Huabei to only part of Ant’s user group while turning others completely to Xinyonggou, the person said. However, it’s balancing act to select which users—those with better or worse credit history—to hand over to banks and other financial institutions. If Ant chooses to push customers with not-so-good credit to banks, they may not be able to obtain loans from the banks and Ant would end up losing users as well, the person said.

The final plan seeks to strike a balance among multiple options, while Ant Consumer Finance also faces an imminent need to increase its own capital, the person said.

Ant has also dramatically reduced credit available to some Jiebei users. For example, the original maximum one-time cash withdrawal limit of 300,000 yuan was halved and has to be divided into multiple withdrawals.