By Liu Ran and Guo Yingzhe 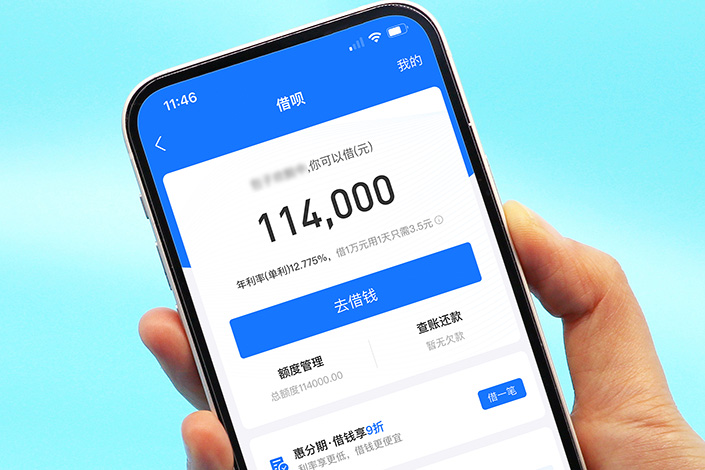 Ant Group announced Sunday that it is dropping its Jiebei brand from the lending services provided by partners on its platform. Photo: VCG

Chinese fintech giant Ant Group Co. Ltd. has launched a major reshuffle of its consumer lending business that seeks to draw a line between its own financial services and those provided by third-party banks and its other partners.

The reshuffle is part of a broader overhaul that the Jack Ma-owned Ant Group has undertaken to meet the tightened regulatory requirements for fintech platforms since authorities abruptly halted the company’s would-be $34.5 billion IPO plan late last year.

Ant Group announced Sunday that it is dropping its Jiebei (借呗) brand from the lending services provided by partners on its platform in order to differentiate those from its own financial services, according to a statement sent to media.

The loans issued by its partners will be issued under a new page entitled Xinyongdai (信用贷), while those issued by Ant Group’s own consumer finance unit will remain under its Jiebei brand, the statement said.

The purpose of the reshuffle is to “help borrowers clearly see the actual providers of consumer lending services,” Ant Group said in a response to questions from the users of its flagship fintech platform Alipay.

The services displayed under the Xinyongdai section of Alipay are operated independently from Ant Group by its partner financial institutions, which determine the credit lines and interest rates based on its users’ information, the fintech firm said.

For example, according to a credit line contract under the Xinyongdai section seen by Caixin, both the credit line and the loan services are provided by the Shanghai branch of Bank of Nanjing Co. Ltd., with an Ant Group subsidiary only acting as a “technology consultant.”

Previously, loans under Alipay’s Jiebei brand were mostly issued through a partnership between Ant Group and traditional financial institutions. Under some circumstances, banks provided a majority of the capital — in some cases up to 99.9%.

In a similar business model that other major tech firms had also adopted, Ant Group acted as an agent between banks and borrowers without putting up any of the capital. These two models substantially expanded the reach of some regional banks, which are restricted from opening branches outside their home provinces.

Although these models were profitable, they raised concerns about the potential risks they posed to the financial system as some banks completely abdicated their risk control responsibilities.

Financial regulators have tightened oversight on both tech platforms and banks in terms of their online lending services. Top financial regulators have told Ant Group to take Alipay back to its roots as a payment services provider by removing financial products from the platform and delinking them from Alipay’s payments infrastructure. They also banned Ant Group from allowing other financial institutions to issue loans under the brands of Jiebei and Huabei (花呗), an online credit service that along with Jiebei generated the majority of the company’s income.

The China Banking and Insurance Regulatory Commission has directed banks to “independently manage risks” from their online loans and has forbidden them from outsourcing crucial links in loan issuance and management.

In Ant Group’s overhaul, the firm also plans to restructure itself into a financial holding company that will encompass all subsidiaries engaged in financial activities, meaning that it will be subject to regulations similar to those covering a traditional financial company — rather than a tech firm.