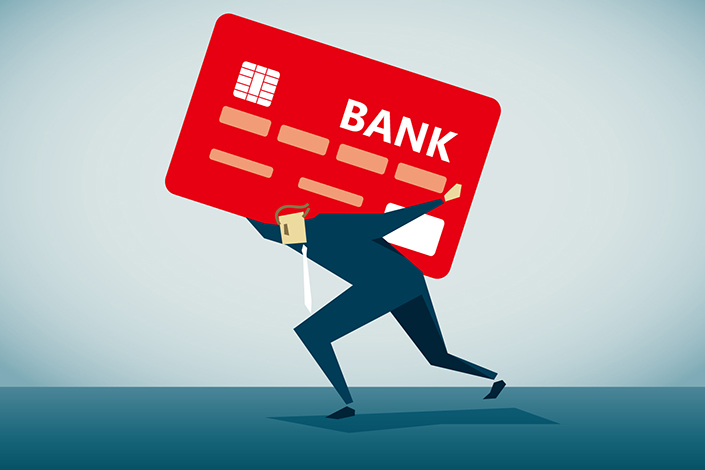 For smaller, regional Chinese banks, teaming up with vast internet platforms to offer consumer loans seemed like a perfect solution to both sides’ problems.

The banks were able to tap the platforms’ huge pools of customers, solving the problem of how to find new clients and boosting their profits. Meanwhile the internet platforms were able to access the capital they needed to attract customers or expand their lucrative microlending businesses.

So now these smaller lenders are back to square one. Some are shifting their strategy by focusing on small businesses, rather than individuals, or even building their own online lending platforms. However, these transitions are hamstrung by these banks’ shortage of technologies and talents, analysts said.

Under the joint lending model, prevalent in the past five years, lenders partnered with internet platforms that hold microlending licenses such as fintech giant Ant Group Co. Ltd.

Banks usually provided a majority of the capital for the loans — which can be up to 99.9% — then the platforms offered the loans through their apps, the largest of which have hundreds of millions of customers. In return, banks handed off a cut of the profits.

There’s also a similar business model in which tech firms just act as a middleman between banks and borrowers without providing any part of the capital, called “loan facilitation.” The two models have hugely expanded the reach of some smaller banks, including privately owned lenders and regional banks that are restricted from opening offline branches outside their home regions.

For example, Shengjing Bank Co. Ltd., a city commercial bank based in Shenyang, capital of Northeast China’s Liaoning province, reported its outstanding consumer loans had reached 20.7 billion yuan ($3.2 billion) at the end of 2020, more than six times the figure two years earlier. The growth was driven by its joint lending partnerships with Ant Group and other internet platforms, said a banker familiar with the lender.

Bank of Tianjin Co. Ltd., headquartered in the northern port city, reported its outstanding consumer loans had grown to 91.7 billion yuan at the end of 2019, a tenfold increase within two years. Again, this stratospheric growth came from joint lending and loan facilitation, the person said.

“Under an extreme scenario, a bank can just transfer funds to a joint account that is operated together with its internet platform partner, without doing anything else. The platform then finds customers, prices the loans, makes risk assessment and lends and receives money on behalf of the bank,” a source close to regulators told Caixin. “As the customers are in the internet platform’s hands, the platform also takes care of all post-loan management, such as collecting and disposal of bad loans.”

But putting so much of the process in internet platforms’ hands has brought risks to the financial system, given the lighter regulatory oversight applied to their financial businesses — though this is changing.

Many banks completely abdicated their risk control responsibilities under the joint lending model, a financial business manager at an internet giant told Caixin. And while banks do some risk control under the loan facilitation model, some larger internet platforms demand they give approval to at least 80% to 90% of loan applicants.

Last year, regulators stepped up efforts to close the loopholes in the oversight of tech firms’ financial services businesses. In November 2020, China issued draft rules that stipulate stricter standards for online microlenders, tightening restrictions on a range of metrics including leverage levels and joint loan contributions.

In February, the top banking regulator issued a notice that tightened oversight of banks’ joint lending businesses with internet platforms. The notice mandates that in any joint loan, the non-bank partner must provide at least 30% of the capital. It also bars regional lenders from using the internet to lend to customers outside their region. Also, it said commercial banks should not outsource any key element of loan management and should carry out core risk control measures on their own.

Some banks subsequently shifted their focus to the loan facilitation business model. But that was soon dealt a blow amid regulatory concerns that internet companies could abuse borrowers’ credit information, such as their debt and repayment history and consumption records. In September this year, the People’s Bank of China (PBOC) released rules under which financial institutions are barred from jointly gathering credit information with companies without credit reporting licenses.

“Platform companies in the financial business should follow the principle of ‘same business, same rules,’” Yi Gang, governor of the PBOC, said at a speech in October. He added that the purpose of the new regulations on credit reporting is “to cut the direct link between (unlicensed) personal credit services with financial institutions.”

The tightening regulations have seen online lending by small and midsize Chinese banks shrink sharply. Among 50 banks that released their 2020 annual reports, by the end of last year, 13 had either halted new online lending or significantly scaled down their outstanding exposure, according to Caixin calculations.

Bank of Huludao Co. Ltd., a regional bank based in Liaoning, reported that its outstanding online loans slumped 85% year-on-year to 510 million yuan at the end of last year, the biggest decline among the 13 lenders.

Smaller lenders are now trying to figure out new ways to sustain the strong growth they’ve enjoyed until recently. The tightening restrictions will push lenders to build up their own online sales channels to gain new customers, or shift their focus to corporate customers, said Sun Yang, a senior researcher at the Suning Institute of Finance.

This kind of digital transformation has long been a trend in China’s banking sector, with major banks operating their own online lending platforms. However, smaller banks’ limited resources mean setting this up from scratch will be challenging.

“Digital transformation is difficult for small and midsize banks as their foundation is weak,” said Gu Yiming, a senior advisor to the internet finance department of Hami City Commercial Bank Co. Ltd. “It is not only a challenge to their technical system, but also a challenge in terms of talents, mode of thinking and organizational structures.”

Another challenge is that many smaller banks, which have for several years relied on internet platforms to conduct risk control for the bulk of their lending, have underdeveloped risk control abilities of their own. This is especially true for some privately owned banks.

These banks previously relied on their internet partners to attract customers, a source familiar with the matter told Caixin. They outsourced risk control and product design to their partners, but neglected to develop their own capabilities.

“These banks’ future depends on their own capability to conduct risk controls. It’s likely that some of them would witness their business shrink sharply,” a person in the consumer finance industry said.

A pivot for business clients

Another potential avenue for small and midsize banks is to focus on developing business customers, rather than individual borrowers.

Joint loans were mostly in the form of consumer lending, but there are signs that the market is saturated. Associated with rapidly increasing levels of household debt in China, growth in the country’s total outstanding value of consumer loans slowed to 12.7% in 2020 from 32.3% in 2016, according to central bank data.

“As regulators are dealing with risks posed by internet platforms, local banks can take advantage of this opportunity to retain high-quality micro and small corporate customers on their own home ground with the support of real fintech,” an industry expert said.

Many small and midsize banks are already dominant in their local area, so it is key for them to retain existing customers through high-quality services, said Tao Yi, a vice president of Jiangsu Zhangjiagang Rural Commercial Bank Co. Ltd.

A source close to Longjiang Bank Corp., a regional bank based in Northeast China’s Harbin city, said the intention of regulators was apparently to encourage regional banks to focus on their local business. After the banks are forced to shift away from joint lending business, they will have more resources to direct toward small-business loans, an area the authorities are keen to promote, the person said.

“Micro- and small-business loans will become a focus of business transformation,” a person who works at a fintech platform said.