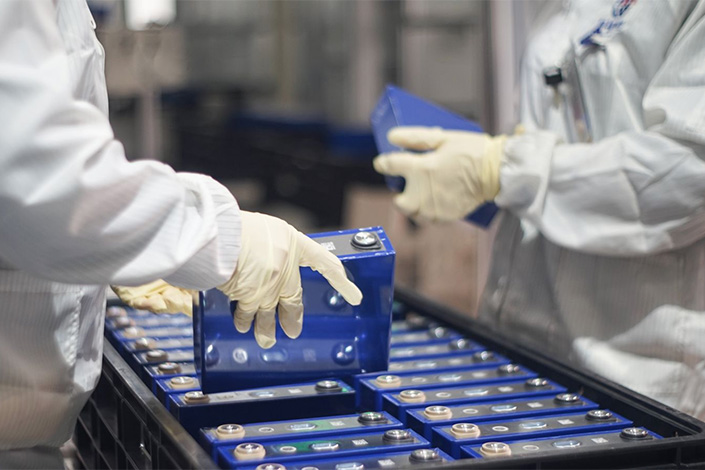 Employees work at a battery production workshop of Ganfeng in May 2020. Photo: ganfenglithium

Skyrocketing lithium prices aren’t likely to stabilize unless the new-energy vehicle industry begins to mass-produce alternative battery technologies or major recycling programs are put in place, according to the head of China’s largest miner of the metal.

Li Liangbin, chairman of Ganfeng Lithium Co. Ltd. (002460.SZ/1772.HK), told Caixin in an interview that the volume of installed batteries could exceed 3,000 gigawatt-hours (GWh) by 2030 and overall global demand for the material could reach 3 million tons.

Global demand for lithium carbonate equivalent (LCE) amounted to 369,000 tons in 2020, according to data from Minmetals Securities cited in Ganfeng’s 2020 annual report.

Prices of battery-grade lithium carbonate have more than quadrupled this year in China, mainly driven by electric vehicle demand. As of Tuesday, the price stood at 200,000 yuan ($31,289) per ton, up 277% from the beginning of the year, according to metal research institute Shanghai Metals Market.

Sodium-ion batteries, which do not contain lithium, are evolving as a viable substitute for lithium-ion batteries due to the natural abundance of sodium, good low-temperature performance and rapid charging.

In July, battery giant Contemporary Amperex Technology Co. Ltd. (CATL) (300750.SZ) unveiled its first generation sodium-ion battery, as well as a battery pack solution that can integrate sodium-ion cells and lithium-ion cells into one case. The Tesla Inc. supplier said it plans to form a basic industrial chain for producing sodium-ion batteries by 2023.

Ganfeng, which produced 12.9% of the world’s lithium last year, aims to boost its global market share to 20% by 2030, corresponding to a production capacity of 600,000 tons of LCE.

Li said the Jiangxi province-based company will mainly rely on acquisitions of overseas lithium assets and projects, as well as recycling of batteries.

Currently, Ganfeng has stakes in lithium projects in Australia, Argentina, Mexico and Ireland, according to the company’s 2020 annual report. Among them, Argentina’s Cauchari-Olaroz lithium salt lake project — in which Ganfeng holds a 51% stake — is the largest, with lithium-rich brine resources of approximately 24.58 million tons of LCE. That amount can support annual output of over 40,000 tons of battery-grade lithium carbonate for 40 years, according to the report.

“Resources come from all over the world, and the quantity of resources overseas is relatively large. Chinese companies should go out and develop more high-quality resources,” Li said, adding that the company’s goal is to obtain 100% control of certain projects to make it easier to expand production capacity.

Li also said Ganfeng has built annual recycling capacity of 34,000 tons and that it is planning to build a large-scale facility that can process 100,000 tons of decommissioned lithium-ion batteries each year.

Although recycled lithium-ion batteries from electric vehicles could provide a valuable secondary source of materials, challenges include difficulty in separation and extraction as well as concerns over environmental damage.

According to data from the China Industrial Energy Conservation and Cleaner Production Association, recycled lithium accounted for 17% of the country’s overall consumption. That percentage is even lower globally at less than 1% as of May this year, according to the International Energy Agency.